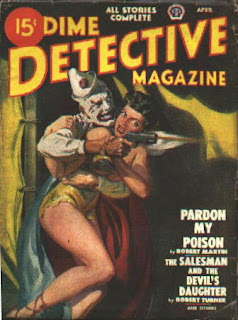 Out of the hundreds of stories John D MacDonald wrote for the pulp magazines in the early days of his writing career, some were terrific examples of mid-twentieth-century popular fiction, some were so-so, and others were downright awful. There were relatively few in either extreme, leaving a lot of okay-but-not-great tales as JDM’s real pulp legacy. Most of the best of them were collected and published in the early 1980’s in the Good Old Stuff anthologies, leaving the remainder to molder away in the crumbling pages of the surviving issues of Detective Tales, Startling Stories, Doc Savage and the like. Several of the good stories not collected in the MacDonald anthologies appeared in other pulp anthologies over the years, collections like American Pulp, Hard-Boiled Detectives, A Century of Great Suspense Stories, Pulp Masters, and their ilk, and I have written about all of these that I know of.


This leaves the orphans, the stories that have never been reprinted outside of their original publication. There is usually a reason for this, mainly that the tales aren’t really worth reprinting. But for fans of a particular author, every story bears at least one examination, and here on this blog I intend -- eventually -- to write about every story MacDonald ever wrote and had published. Given the size of this task, the frequency that I post, and my age, this is a road I will probably never see the end of, but hey, it’s a goal. So today we come to a randomly selected tale titled “High Dive to Oblivion,” originally published in the April 1948 issue of Dime Detective. It’s a perfect example of these middle-tier JDM tales that bear reading but don’t really stand up with the best of them.


Dime Detective published more JDM stories than any other pulp magazine. Here’s what I wrote about it a few years ago:


“Of all the magazines John D MacDonald published short stories in, Dime Detective holds the record for printing the most. From October 1946 until August 1952, MacDonald's works appeared there 39 times, either under his own name or as one of the "house authors" such as Scott O'Hara. The pulp magazine was one of the earliest to accept his submissions and, beginning with only his second appearance, prominently displayed his name on the covers of nearly every issue his stories appeared in.


“Dime Detective began publication in 1931 and ran until August 1953. It was the premier pulp magazine of Popular Publications, who published other "Dime" fiction magazines such as Dime Sports, Dime Western and Dime Adventure. It was, according to anthologist Stefan R. Dziemianowicz, "the one legitimate rival to Black Mask," publishing many "name" mystery writers such as Raymond Chandler, Erle Stanley Gardner, Frederick Nebel, and the father of the hard-boiled detective, Caroll John Daly. Chandler appeared there exclusively from 1937 to 1939, and some of his most iconic short fiction was published within its pages, including "Red Wind," "The Lady in the Lake" and "Trouble is My Business." According to Dziemianowicz in the Introduction to Hard-Boiled Detectives, a 1992 anthology of Dime Detective stories, the magazine lured many of these big names away from Black Mask by paying "the princely sum of of four cents per word -- one cent more than Black Mask and quadruple the going pulp fiction rate." Their newsstand price was also a nickel less than Black Mask.


“He goes on to point out that the magazine "made only two stipulations to its authors: there were to be no novel serializations and the characters they created could not appear in competing magazines. Beyond that, they were given relatively free rein to write what they chose." (Chandler obviously cheated by changing the name of his detective John Dalmas to Phillip Marlowe when he harvested his Dime Detective stories for his later novels.) And although the focus, as one might imagine, was on detective stories, Dziemianowicz explains that "in its later years, it also published a good many non-detective crime stories written in the grim noir style that would become the trademark of Jim Thompson, David Goodis and other writers of the paperback originals that helped put the pulps out of business."


“High Dive to Oblivion” was MacDonald’s ninth appearance in Dime Detective and the story was written when the MacDonalds were living in Clinton, New York. As referenced last week, this period was the beginning of JDM’s great science fiction output, but he was still writing plenty of traditional crime stories. The story begins promisingly, with just the right mixture of mystery and uncertainty.


He worked in a bank, in one of those jobs where you've got to lead a clean life or they can't take a chance on you. He was smart enough to know that. I had his schedule figured out pretty well. I worked on it long enough. I gave up my job to work on it, and now that it's over, I think I'll go back to that little out-west town that I came from -- that Clara came from.


The protagonist, speaking in the first person, is named Deven, and his search for a girlfriend he had before the war has led him to the big city. When he returned from overseas Clara had left to work as a stenographer at a big city bank, and it took Deven some time to recover from post-tramatic stress before he left to go look her up. When he asked about her at the bank he was told that she had left her job two months ago, that she didn’t indicate where her new job was, and that all they have is her home address where she lived when she worked there. A check of the residence reveals that she move out of there as well, around the same time. Also around this time, her letters home to her mother ceased.


Deven goes to the police to ask about her, and for reasons the author never clarifies, tells them that he is looking for an old girlfriend named Alice Williams. He tells an inspector the last date he “saw” her and is then shown photos of four dead Jane Doe’s.


Four dead girls, unidentified. I looked at the pictures. A truck had nearly cut one in two. She was too hefty to be Clara, and the face wasn't right. The second one was a swarthy one who had been hauled out of the harbor. Not her. The third one came out of the river too, only she had been there a long, long time. Probably right through the winter. He said the lab gave the natural hair color as auburn. Not Clara. When she was a little kid her hair was as black as the crows in her old man's corn patch. The fourth was a mess. Her face was smashed. She could have been Clara. She was the right size to be Clara. The blood-soaked hair was black.


The fourth woman was the victim of a fall from an eighth floor apartment, her face so badly damaged from her landing in the back of a truck that her features could no longer be determined. The driver of the truck had only a vague idea of where he was when he heard the landing, but when he stopped to look (thinking he had been hit by another car) he saw nothing. It was only when he arrived at his destination that he found the body, dead, nude with no identification.


When Deven asks about any scars or marks found on the body, he is told of an old scar on the neck, a feature he immediately recognizes as one Clara had, but he bluffs his way out of the police interview by telling the inspector that this couldn’t be his “Alice Williams.” He finds his way to the driver of the truck, who remembers only the block he was on when the crash took place, and Deven spends time visiting every one of the cheap apartment buildings that lined the street. Eventually he finds someone who recognizes her picture. She was a “Mrs. Charles Driscoll” and she and her “husband” were there only infrequently, with many midnight departures on the part of Mr. Driscoll. Through more detective work Deven eventually identifies the man, a bank employee named Alexander Warder who is married to another woman. Convinced that Warder and Clara were engaged in an extramarital affair and that Alexander was responsible for Clara’s fall from the apartment window, he sets out the right this wrong on his own…


There is a lot of uncharacteristically sloppy writing and plotting in “High Dive to Oblivion,” some of it so bad as to jump out at the reader like a typo. In order for MacDonald to make his plot work he had to elbow in a lot of unrealistic, insensible and downright ridiculous situations that don’t stand up to the first reading, let alone repeated ones. The detective work Deven does is simplistic enough that it could have been done by the laziest of policemen, so one wonders why is wasn’t done in the first place. Well, I guess MacDonald wouldn’t have had a story otherwise. I’m not sure he has one here: a good idea that he can’t really pull off successfully. Still, a lot of the writing is expertly done, and the haunted mood of the protagonist is especially well handled. “High Dive to Oblivion” is worth reading for that fact alone. 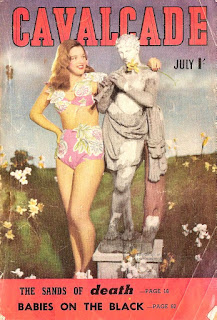 Although this story has never been reprinted as part of an anthology, it was republished in another magazine. It appeared in the July 1949 issue of an Australian men’s magazine called Cavalcade, under its original title, with new artwork and a few editorial changes. (New York changed to Sydney, color to colour, harbor to harbour…). I’m making an educated guess about these changes, since I don’t own the issue of Dime Detective but do have a copy of Cavalcade. I’m also guessing that that “little out-west town” where Deven and Clara came from was originally an “upstate” town, since this reference is repeated later in the story and apparently slipped by the Australian editor. It would certainly make more sense coming from a writer who lived in an upstate town. Perhaps some of the inconsistencies evident in the version I own are the result of other editorial decisions I am not aware of. I’ll have to wait until I can locate a copy of Dime Detective to know for certain. The April 1948 issue seems to be rarer than most.
Posted by Steve Scott at 4:00 AM