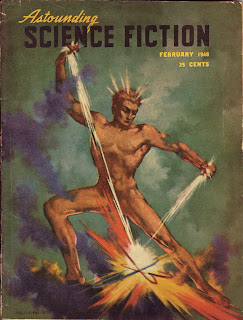 John D MacDonald’s very first sale to a science fiction pulp took place in late 1947 when his story “Cosmetics” was purchased by John W. Campbell for the February 1948 issue of Astounding Science Fiction. It was not MacDonald’s first science fiction sale -- as regular readers of this blog no doubt already know -- for the author had already published three sf or fantasy tales in other types of magazines, ranging from Doc Savage to Liberty to Bluebook. But the real cutting edge of modern science fiction was happening in the sf pulps, where this kind of writing was currently going through what we now refer to as its Golden Age, spearheaded in large part by Campbell and his magazine. Indeed, at the time of “Cosmetics” publication Astounding Science Fiction was probably the premier sf pulp in circulation, with Sam Merwin’s Startling Stories a close second. (Galaxy and The Magazine of Fantasy and Science Fiction were yet to come.)


The fact that MacDonald was able to sell a story in a genre he hadn’t really mastered yet to the premier magazine of its type says a lot about his talents as a writer, even this early in his career, before the novels, before the move to Florida, and before Travis McGee. Still, “Cosmetics” is a bit rough around the edges, with lots of pontification and science details which probably appealed to Campbell but doesn’t sit that well in the modern ear. Tellingly, when the author, late in his career, published an anthology of his best sf work -- well, what he thought was his best sf work, a list some, including me, have issues with -- he omitted this early work altogether. Perhaps he thought it too long winded, too didactic, too poorly written and, perhaps, too derivative. He would be guilty to some extent on all of these charges, yet “Cosmetics” is an enjoyable read and a telling view of a future where one of mankind’s greatest desires could finally be fulfilled and, importantly, how that fulfilment changed society.


Set about one hundred years in the future, the Earth of “Cosmetics” seems a beautiful place. And why not? Thanks to a device called the autocosmeton, every man and woman can, through a combination of drugs, hypnosis and machinery, alter their appearance to any physical ideal they wish for. The cities and towns of the world are peopled with men who were “tall and incredibly handsome," and "long-limbed women [who] were the apex of the dream of beauty which had existed through the ages." The process, called autocosmetics, is primarily a “concentration of the psychic process” aided by drugs and mechanics. Every home has a autocosmeton and there is no limit to the number or kinds of appearances one can produce using the device. The first inclination is, naturally, to become a physical ideal, but many people alternate between beautiful and ugly, “frequently shifting to the grotesque, making life a succession of masks -- the lovely and the horrible, a spiced cookery of flesh and outlook.” But it is the beautiful that is chosen and kept most often, leading society to require that everyone carry an identification medallion pinned to their tunic. It’s the only way to keep track of who is who.


The story’s protagonist is one Jason Blood, a man who has joined with a small group of rebels who have decided not to change into the beautiful. As the story opens he is reading a letter from his wife, telling him that she is leaving. She writes:


“Do you remember when we were first married? You had none of these silly scruples about autocosmetics at that time. Our love was freshened by the rhythm of variety. Remember how I'd leave you a note telling you how I wanted you to look? Darling, you were such a wonderful succession of tall, strong men -- and I tried so hard to make myself into all the types of beauty that you wanted to possess... But now these things which you mysteriously label 'principles' have come between us. You have made no change in four years, and you talk about 'solidification of personality' instead of about what you can do to please me. Jason, darling, I don't like the form you selected for yourself four years ago. By retaining it, you are not living up to your responsibilities as my husband. I hate that lean, ascetic face, the thinning hair, the knobbed knuckles, the harsh look in your eyes.”


She goes on to reveal that she is having an affair with “a man who is something like what [Jason] used to be," but promises to return when he decides that he has "been wrong."


Enter Karl Dane, “a big man with pads of flesh around his small eyes, a mountainous belly and fat, freckled hands. He was an atrocity in a city of beauty.” He is the intellectual leader of this peaceful group of “ugly” rebels, and he begins by telling Jason that their group has lost another member. "He got tired of fighting... He turned himself into a pretty boy this morning and now he's out roaming the city, beaming foolishly at the rest of them." Then he proceeds to launch into a lengthy diatribe against autocosmetics and outlines the long history of the process, which began as far back as 1933. He then goes into the unintended effects of this mass process and what it has done to society.


“The best part of the human personality is conditioned by the face we present to the world. Our actions are in part a compensation for this static impression that we give. Thus, in a world where you can have a new face tomorrow and a new figure... there [is] no incentive to force changes on society in compensation for the static impression that you gave to all people... Much of our great art and literature were created by people who were seriously and hopelessly ill-- conscious of their illness and striving for some sort of immortality... We are in an era where the entire ego of the common man -- and woman -- is built around the idea of eternal change in outward appearance. Thus we have achieved a norm in personality that is deadly. There is no sublimation of dissatisfaction into creative channels. No invention, no art, no creative thought. Just maintenance. That's all. The Age of Maintenance."


When Dane is done pontificating he departs to go visit with a possible new recruit, leaving Jason alone. As he sits thinking of his estranged wife, unbenounced to him two figures stealthily enter his apartment… 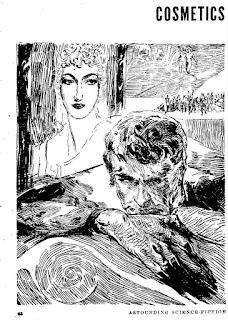 This story can be split into three parts: the exposition, Dane’s long speech, and the final bit, which I won’t reveal for would-be readers. What is most interesting to students of MacDonald’s work is the middle section. It is a fictional polemic that is nothing less than the genesis of that form which the author used in his final work, Reading for Survival, where Meyer and McGee (primarily Meyer) explore societal problems at great length through the mouth of a fictional character. (This device was also used in the Travis McGee short story, “Terminal Cases.”) Karl Dane even looks a bit like Meyer, and he certainly sounds like him. And while “spindly” Jason Blood is no Travis McGee lookalike, he plays the exact same role that McGee did in both of those later two works. It’s always fascinating to discover just how uniform MacDonald’s work can sometimes be.


John D MacDonald went on to write a lot of science fiction, and from 1948 to 1952 he produced over 45 stories and two full novels (both based on works that first appeared in the pulps.) It could be said that during this period he was a major force in science fiction, as assertion I’m sure a lot of sf fans might argue with. When the author collected what he deemed to be his best work in the field for Other Times Other Worlds in 1978, he wrote an afterword that seemed dismissive of both his work in particular and science fiction in general, and it pissed a lot of people off. But back when he began he was as enthusiastic as the wildest fan, evidenced by a newspaper column he wrote a few months after “Cosmetics” was published, titled “Fantasy, Unlimited,” which you can read on this blog. MacDonald would go on to write better stories than “Cosmetics,” exploring many different “subgenres” of sf, including space opera, time paradox, alien invasion, dying Earth, and lots of social science fiction. For me, I’d rather read a JDM sf story than one by anybody else, but then, I’m extremely biased.


As far as I can tell, “Cosmetics” has never never been anthologized.
Posted by Steve Scott at 1:00 AM