From the Top of the Snow Covered Hill 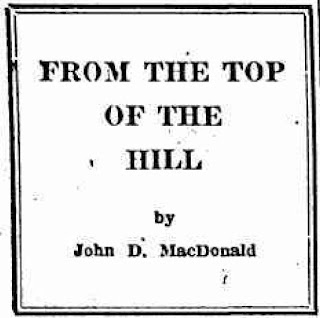 Things have been quiet lately here at The Trap of Solid Gold as an altered work schedule and family obligations have eaten into my free time. I’ll try and do better going forward, but I will probably be forced to switch to a bi-monthly schedule of postings, at least for the time being.

For now, here are a few new items:

I recently managed to score a couple of original issues of This Week magazine containing JDM stories I have already written about. As a result I was able to replace the crappy microfilmed black-and-white illustrations with full-color versions. And to add icing to the cake, both stories were illustrated by my favorite magazine artist of the last century, Lucia Larner. As an added bonus, one of them -- “Who Stopped That Clock?” contains the short story in its entirety, if one is so inclined to read it. It’s certainly not one of MacDonald’s better efforts, but it’s an entry in the canon that has never been collected or reprinted. Here are the links:

“I Love You (Occasionally)”

“Who Stopped That Clock?”

To make up for three weeks of dead silence here, below please find a transcription of one of JDM’s From the Top of the Hill newspaper columns from the Clinton Courier. This one was published on February 26, 1948, when the MacDonald family was living in a house on the campus of Hamilton College, at the crest of a tall hill. It contains a cat story that was omitted from The House Guests (the mole) and one that was included, albeit in a more detailed version (the Mattingly’s Gothic cat door).

From the Top of the Hill
Personals:

We have a subscription to a magazine called Writer's Digest, and we are fond of it not only because it has information about changes in editors and magazines and such, but because it has one of the most fascinating "Personals" column we have ever seen anywhere. This week we'll give you a random sample.

Right there, friends, you have the perfect method of handling those eager creditors. Acknowledge receipt of your bills from Guam.

"A PLAN OF ACTION lies behind every success. Write me about one thing you desire. A specific plan by return mail. $2 Box...."

Think of the incredible wisdom of someone who can whip up a plan of action for you and get it off by return mail!

"A YOUNG MAN struggling sincerely to achieve writing success. I need time. Your dollar may turn the tide. Box...."

After the first three dollars arrive, this paying for the ad, our unknown friend is in the only business I've ever heard of with a 100% net. And whatever he gets is apparently subject to gift taxes, not income tax.

"25 CENTS WILL BRING a poem written just for you. Any subject, any length."

One of these days we're going to send in two bits and ask for a poem on the subject of writing a newspaper column.

Sadder words than these were never written. As a short, short, short story, it is superb.

If we ever meet Luana, we'll certainly tell her a thing or two. Poor old Joe has been putting the same line in for month after month after month. We suspect that Luana is a rich, cool and heartless debutante who. during her war career with the WAVES, was stationed at some little town where she toyed heartlessly with the affections of poor, but honest Joe. Luana has gone back to the dizzy whirl of the big city, leaving Joe with enormous tears in his eyes and no way to find her except by paying his forty cents a month for those four little words that are like a moan in the night.

Luana, why don't you at least write to him?

One of our cats, Geoffrey, the adventurous one, has insisted a dozen times this winter on being dropped out one specific window. It is not politic to ignore the demands of our cats. They have high, nasal voices and limitless persistence.

Each time he was dropped out of this one window he proceeded to dig a hole in the snow in which he would wedge his head, and we had about decided that he was psychoneurotic. We thought maybe the endless winter we getting him and he was trying to finish himself off in a suitable manner.

Then the snow melted, and we find that deep under where Geoffrey was digging, a mole had rooted up a patch about two yards square, going around and around and around where we had optimistically hoped to have grass, come summer. Friend mole operated like a miniature trench digger.

Anyway, Geoffrey has vindicated himself by depositing the body of the mole on the side porch, and has been walking around looking smug ever since.

But even with all the snow, we suspect that Geoffrey has been getting his mouse ration regularly. Our neighbor, earlier in the winter, asked us to bring him over to the barn. We did so and introduced him to a new, small Gothic arch cut through the barn door. Since the introduction, his tracks have led directly to the arch.

Driving a car up and down College Hill is the most exciting winter sport available in this vicinity. Ski enthusiasts, well versed in high-tempo turns and forty degree slopes have been known to turn pale before making even the first turn on College Hill.

As a topic of conversation, the condition of the Hill is unexcelled. Old residents spend many happy hours comparing techniques and methods for the proper approach.

There is no thrill comparable to rounding the first turn on your way up, only to find someone bearing down on you sideways. Strong men, having zoomed all the way up, only to come to a dead stop with wheels spinning a scant fifteen feet from the crest, have been known to sit behind the wheel with the tears dripping off their chins while the cars slowly sagged backward toward the abyss.

Coming down the hill is most exhilarating. The moment of suspense arrives when you let the car take over and let it decide whether it will carom off a snowdrift, or off another vehicle on the way up.

A few times a winter there comes what is known as a "tangle". This is a technical term and refers to that moment when two or three cars, with fenders locked, slide slowly and majestically down to the foot of the hill, where they provide a sort of backstop for any number of other cars which crunch into the group.

The happy people laugh and shout, and their cheers are punctuated by the crinkling of fenders and the tinkle of breaking headlights.

Unless you have participated in one of their "tangles" and unless your car bears the honorable wounds and scars of the icy battle, you cannot claim to have really enjoyed the sport.

A much gayer time would be had by all. of course, were it not for the spoilsports who are all the time sprinkling the grand slide with salt, ashes and sundry abrasive materials.

Labels: From the Top of the Hill
Newer Posts Older Posts Home
Subscribe to: Posts (Atom)