December 28 will mark the twenty-fifth anniversary of John D MacDonald's death, a date I recalled with a posting on this blog two years ago. I'm reposting that entry today, a few days early, along with a some new comments at the end.

John D MacDonald died 23 years ago today. As I write these words I find myself in a state of disbelief that it has been that long.


In September 1986 MacDonald checked into St. Mary's Hospital in Milwaukee for a "routine" heart bypass operation. He was 70 years old. The operation took place on the 18th and MacDonald developed pneumonia afterward. He was bedridden and did not improve. In late November he slipped into a coma and died a month later, on December 28, 1986 at 10:40 am.


According to biographer Hugh Merrill, MacDonald's doctor had assured him that the operation was relatively safe, with "only a 5 to 8 percent operative risk."


A month after his death an article appeared in the Milwaukee Sentinel (reprinted in the JDM Bibliophile 39) written by one Joe Manning, describing JDM's time in the hospital:


"JDM's wife of 49 years, Dorothy, and their son Maynard, and a grandson, Karsten, were with him when he died ... from complications of heart disease...


"'You would not believe the impact his death has had on the hospital staff who were involved in his care. So many people had gotten close to him and his family,' said Steven Pinzer, hospital spokesman.


"Mrs. MacDonald and her son had remained in the Milwaukee throughout MacDonald's stay in the hospital.


"Nurses brought food from home Thanksgiving and Christmas so the MacDonald's could have home-cooked dinners together in the hospital's intensive care unit.


"A physician at St. Mary's said MacDonald 'had technically difficult arteries to bypass,' and complications to other organs led to intensive respiratory support.


"MacDonald's hospitalization had been particularly draining to the staff and family members because ' his progress was like a roller coaster, up and down.'


"'When it looked like he was going to make it, there would be a setback. Everyone thought he was finally on the road to recovery, but he had another coronary arrest and went into a coma,' the physician said...


"'There were MacDonald novels all over the hospital,' said the physician, who asked not to be named.


"The physician said MacDonald 'was incredibly lucid and his notes were extremely descriptive.' (JDM's wife Dorothy actually kept the notes, and wrote a detailed log of what she thought would be of interest during JDM's stay in the hospital.)


"'His intelligence came through all of it. He was unique in the way he coped with all the vicissitudes in the intensive care unit,' the physician said...


"Maynard, who lives in New Zealand with his wife and children and makes rocking chairs, remembers following behind his father on a family walk during a visit by his father.


"'He was walking alone with all of his five grandchildren in tow, as if they were following a big battleship. And this battleship, my father, had complete and constant awareness. He was aware of the people around him and he noted little things he saw. He had tremendous insights into people.


"'It was as if he had radar and electronic sensing equipment like a battleship would have, and nothing escaped his detection -- the exotic little things. He was very curious about the world.'


"During the visit, Maynard said, he told his father about a friend who worked in the sewer department. The friend had told Maynard that people often lose their false teeth down the toilet and the teeth are held at the treatment plant until claimed by the people who lost them.


"Maynard and his father had a hard time believing that, but went with his son to visit the friend, who worked the late-night shift.


"'My friend, Simon, took him into a room and showed my dad row upon row of false teeth that had been recovered from the sewer. He thoroughly enjoyed it. He was curious enough to go check it out for himself.


"I've been waiting for years to pick up a McGee and see the teeth thing in there,' he said..."


Nearly every newspaper in the country wrote some sort of appreciation of the man and his work, a fact that must seem astounding to anyone today who is not familiar with him. He was deeply respected, especially by his fellow writers, and authors such as Stephen King, Ross Thomas, Tony Hillerman, Dean Koontz and Donald Westlake all wrote appreciations. The Boston Globe wrote that JDM was "the Dickens of mid-century America -- popular, prolific and, if not conspicuously sentimental, conscience-ridden about his environment..." The Richmond News Leader said "No reader ever finished a MacDonald book without having learned something of value" and The Raleigh News and Observer said JDM was "almost certainly the most important novelist contemporary Florida has produced."


One of my favorite recollections of MacDonald came from Dave Hughes, a BIB subscriber from Colorado who had interviewed JDM in the mid-1970's:


"He was tall, broad-shouldered, with a ready smile and friendly conversation always waiting to be released. His love and pride for his wife and son were obvious and unmistakable. He loved life, he loved writing, he enjoyed good talk, he liked people. His grin and good-natured teasing were aimed at himself as much as at anyone or anything else. He flatly refused to take his fame and critical appraisals seriously. He was aware of his own foibles and had long since accepted them. He was satisfied with what he had become -- although he was never satisfied with his writing. No matter what stage of his career was discussed, he described himself as 'still learning my craft.'"


We're currently living through a period -- at least, I hope it's only a period -- when MacDonald and his works have become largely forgotten by the reading public. Except for the Travis McGee novels, there are only two of his other 56 books still in print: The Executioners (published under the title Cape Fear) and A Bullet for Cinderella, which was reprinted by Wonder Publishing Group as part of their Noir Masters series. A new biography promised this year by Schaffner Press seems to have disappeared, although it may see the light of day eventually. A film version of The Deep Blue Good-By is "in development" and will likely star Leonardo DICaprio, but that wouldn't appear until at least 2011 at the earliest, and it is one of 27 (!) films listed under DiCaprio's IMDb profile as being "in development," so who knows if it will ever be filmed.


Wouldn't it be ironic if a film version of a MacDonald work was the trigger for a new explosion of interest in his work? If the medium that never seemed to understand him or get him quite right was the cause behind having his books republished? I think even JDM would have a good laugh over that.

When I consider that it's been twenty-five years since MacDonald took his last breath, it seem incredible to me. At times it will feel like only yesterday, and at other times like a million years ago. Little has changed since I posted this entry. One additional John D MacDonald short story anthology has been published, the eBook Death Quotient and OtherStories. A Bullet for Cinderella was republished in paper format by Gutter Press under MacDonald's original title, On the Make. And MacDonald's 1955 short story "The Killer" was included in a mystery anthology -- another eBook -- called Master of Noir: Volume Three. Other than that there hasn't been much change in the world of JDM. The film version of The Deep Blue Good-By is still "in development," and has gone through a number of proposed directors. The JDM biography that was originally to have been published in 2009 is still MIA, although I have been contacted by the author, who assures me that he is still working on it. MacDonald expert and former managing editor of the JDM Bibliophile, Cal Branche, along with his wife Nola, have just completed a three year project of transcribing John and Dorothy MacDonald's wartime letters -- 523 of them! -- for the Archives Department of the University of Florida and they are hoping they will eventually be made available to the reading public. And The Trap of Solid Gold is still humming along, albeit at a slower pace than the one-post-per-day I somehow managed when I began this project.

JDM on the Hollywood Red Scare

Now that the headlines on the testimony of various Hollywood characters have faded away -- to reappear later, no doubt -- we must confess that the whole affair gave us an odd feeling of unreality. There were those famous faces -- R. Taylor, G. Cooper, R. Montgomery -- performing for the investigating committee. We are used to those people as two dimensional beings on a flat silver screen. We are accustomed to seeing little publicity releases on their marriages and their swimming pools. To have them plunked down in the middle of a discussion of ideologies seems a bit like reading an appreciation of Einstein by one Mickey Mouse.

The next time we go a few steps up Fountain street and buy ourselves a hunk of celluloid escape, we will gaze at those famous faces and ponder that the life of an actor or actress in indeed a hard one. Not only do you have the responsibility for getting rid of several thousand dollars a week, but you might at any time have to sit in front of a group of un-sympathetic Congressmen and be led into a discussion of realities. Any touch of reality must be quite a jolt to our tinseled friends out there.

Stephen King -- ever the John D. MacDonald fan -- makes reference to his former friend in his Entertainment Weekly article "My 2011 Pop Culture Favorites," published in this week's issue. Number 10 on his list of 20 is Phillip Caputo's novel Crossers. 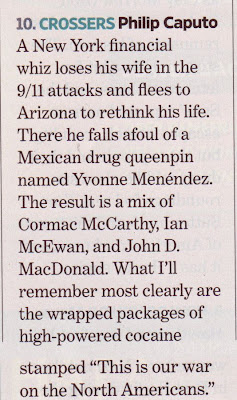