The Works of Walter and Jean Shine

Since I have been referring so often to the research work of Walter and Jean Shine in this blog, and will continue to do so, I thought it might be a good idea to post an entry exclusively on that work. My earlier posting recounted my introduction to the JDM Bibliophile and how I came to correspond with, and work for Walter; this entry will focus on the legacy that Walter, along with his wife Jean, left to the fans of John D MacDonald.

Walter Shine, who passed away on December 10, 1997, was, according to JDM Bibliophile #60, "the world's most knowledgeable MacDonald scholar." A retired attorney and businessman, he didn't seem retired to the readers of the BIB. His column "The Shine Section" was the delight of every issue, filled with items and news available nowhere else, and most heretofore unknown. A resident of North Palm Beach, he and Jean made frequent trips to Gainesville, where the JDM Collection is housed, and spent hours going through that voluminous treasure. He also corresponded regularly with MacDonald himself. He did know more than anyone and wasn't ashamed to admit it. He did not suffer fools, perceived plagiarizers or sloppy researchers lightly, and his criticism of these lesser mortals was invariably harsh. I'm happy to remember that he was never less than gracious to me. Outside of one telephone call, our contacts were exclusively through the mail (snail mail, as we refer to it now), and he praised the work I did for him, even though I had no prior experience doing what I was doing.

We are currently living through a fallow period of appreciation for JDM. Most of his non-Travis McGee books are out of print and his work seems nearly forgotten, outside of a few dedicated websites. Perhaps the upcoming film of The Deep Blue Good-By will ignite a new wave of interest. I hope so, and if it does, Walter's work will still be that starting place for those interested in delving into the real meat of MacDonald's output.

The following is a listing of the Shines' published work. Following that I will briefly discuss the works I own and refer to in this blog. The list was taken from BIB #60, submitted by his widow and co-author. 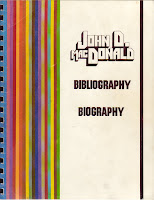 of MacDonald information, the most important and most often referred-to work the Shines produced. A major expansion of the Moffatts' JDM Master Checklist, it lists everything MacDonald ever published: by title, by year, by publication, and even with word counts. This includes his fiction as well as non-fiction work, awards and prizes he received, what and where certain works were anthologized, TV and movie adaptations, as well as a brief biography and section on criticism. If you own only one Shine book, this is the one. Unfortunately it has been long out of print (it was published by the University of Florida) and the few used copies available for sale are very expensive. 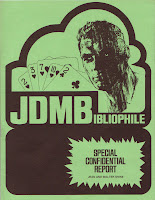 s a supplement to the JDM Bibliophile, this is the standard reference work for the details of all things Travis McGee. Written as a faux-investigative report, it details everything written about Travis in the 18 novels written through 1978 (subsequent editions added later volumes, but I never purchased them). If you want to know how tall Travis really was, or his distinguishing marks, his criminal record, friends, or military service, consult this work. Having trouble remembering what Nora Gardino came to Travis seeking to recover? A list of every client is here, along with their "Lost Item," "Recovery" and "Distribution." Eight full pages list every known detail of the Busted Flush. There's a page on the Muñequita, Miss Agnes, three pages on Meyer, and much, much more. Hopefully the film producers of the upcoming The Deep Blue Good-By have a copy. Again, out of print, very expensive used copies are available now and then.

arket paperback written by one John Brogan (featuring an introduction by JDM himself), this is a question-and-answer book testing the readers knowledge of the McGee series (Sample question: "In what city is McGee arriving as One Fearful Yellow Eye opens? a. Chicago, b. Miami, C. San Francisco, d. New Orleans." The Shines' names appear nowhere in the book, so I assume they were basically brought in as fact-checkers. 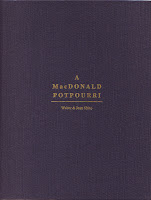 ellany of post-perusal pleasures of the John D. MacDonald books for bibliophiles, bibliographers and bibliomaniacs --", this hardcover book is for fanatics and completists only. Described as being a collection of "all known information to identify almost all of the MacDonald books published in the United States," it's a book for "collectors, dealers and bibliophiles." If you need to know which edition your old copy of The Deceivers is, you can look that up here. You can also learn that the working title for that novel was The Faithless. You will see a black-and-white reproduction of the first edition cover, as well as reproductions of the covers of subsequent editions. Lots of stuff here, mainly for collectors. Out of print, used copies appear occasionally. 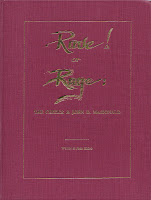 mmarizes all available reviews and critical materials about MacDonald's work found in magazines, newspapers, books and journals." With the books listed in chronological order, each entry is followed by a line of two from a contemporary or recent review of the book. Again, for the completist. There's a brief section titled "Books About John D. MacDonald or His Works," where the unfortunate then-ongoing battle between Walter and Ed Hirshberg, the editor of the JDM Bibliophile, bleeds out into his brief comments on Hirshberg's biography of MacDonald. He savages Hirshberg's work, then goes on to tout his own MacDonald books, while claiming he will "offer no self-criticism." It comes off as overly nasty, even if what he says may be true. Out of print, but available used.

One final note on Jean. As I mentioned in my earlier post, I always assumed that Jean was a "silent partner," and that Walter did all of the writing. That assumption was borne out in issue #60 of the BIB, when Jean wrote to Hirshberg, "I CAN NOT WRITE. I researched and helped Walter in many ways but he was the writer." Basically correct, I'm sure she was being overly modest.
Posted by Steve Scott at 6:29 AM