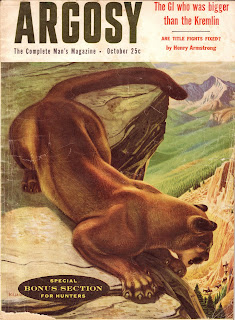 Readers of John D MacDonald in the 1970's will no doubt recall a frequent quote used to promote and sell his various books in print at the time. It was from friend and author Kurt Vonnegut and proclaimed "...[to future generations] the works of John D. MacDonald would be a treasure on the order of the tomb of Tutankhamen..." Being mentioned alongside one of the ancient pharaohs of Egypt was praise enough for me and it was years before I bothered to try and understand exactly what Vonnegut was referring to. It was, of course, MacDonald's seeming expertise in every subject he ever wrote about. Whether it was the world of stamp collecting or hotel management, motorcycle gangs or hot air ballooning, the inner-workings of a televangelist empire or the daily details in the life of a bank teller, the man seemed to have had a real background in every one of these areas. And while MacDonald admitted to doing prodigious research for each of his novels and stories, he also claimed to have "a dustbin mind." In 1981 he told interviewer Dick Lupoff:

"... everything that I pick up from any source seems to stay available [in my memory] -- not readily available in conversation, not readily available when I try to remember something specific and can't, but it seems to pop up when I'm working. Then I have two methods of dealing with the ugly facts when I get to them, if my memory has failed. I either go look them up or I drop it and write around it so I don't have to. Writing around it is a case of trying to do it deftly enough so that nobody will know I'm cheating."

The finely detailed inner workings of remote and sometime-obscure areas and interests in life was a large part of MacDonald's ability to impart a unique sense of realism in even the smallest details of his writing, depicting in his characters a believability in their very commonness. Stephen King called it MacDonald's "feel of the real," and it is evident throughout the man's work, even in the earliest stories and novels. The Vonnegut quote comes from a piece he did for the Chicago Tribune's Book World supplement in 1973, and a more complete reading of it (from Shine's Rave or Rage) reveals a deep understanding of how background develops character, particularly in the way MacDonald did it:

"... his collected works constitute a delightful, un-indexed encyclopedia, an encyclopedia jazzed up by fictional characters who care desperately about the information therein... [to future archeologists] the works of John D. MacDonald would be a treasure on the order of the tomb of Tutankhamen... John comes to us one-by-one with his keen and owlish curiosity, asks us what the rules are. Then he builds a crime and punishment story around those rules, and our livelihoods are immortalized..."

"Long Shot" is a JDM story that originally appeared in the October 1955 issue of Argosy and it is an excellent example of a "livelihood immortalized." The story takes place in the world of the Florida dog tracks, specifically the gambling aspect of that world, and the protagonist -- a first-person narrator -- is an ordinary working-class stiff named Johnny who works behind the five-dollar win-place-show window. Johnny is a hardworking, honest young man who has worked his way up from the two dollar window and aspires to be promoted back to the money room. But the two co-workers on either side of him are of a different make. To his right is Stan Garner, a "stocky, smiling little guy... crooked all the way through," who likes "roughing the customers." This practice consists of shorting someone on their change, typically careless drunks who don't check anyway, counting off change for a five with a missing dollar. It's bad but Johnny knows that it's pretty much the extent of Stan's dishonesty. As Stan tells Johnny, "Get it while you can, Johnny. The customers will rough you if they get a chance. You have to use the angles to stay even."

On his left is Dave Truelow, another type entirely. Dave "has the fever in him," bitten by the gambling bug and he practices the prohibited and dangerous art of "playing out of the box." Johnny explains:

"Here is the way it works. When you report in, you're given a money box. If you're just selling, there may be only fifty or seventy-five dollars in it. As you sell your tickets you put the money in the box. Every once in a while a man from the money room will stop around and take out a few hundred and give you a receipt to put in the box. After the last race you have to be able to total out. The money you started with, plus total ticket sales off the machine, less cash and receipts on hand. The management has no objection to our buying a ticket for ourselves now and then. Those tickets are supposed to be purchased with money out of your pants, not out of the box. Sometimes when an owner steps up and makes a good bet just before race time, the information will go all the way down the line and nearly everybody will buy a ticket... There's no harm in that, if the gambling bug doesn't bite you. But when it bites you and you start playing out of the box, hoping to make out before checkup, then you can be in real trouble." 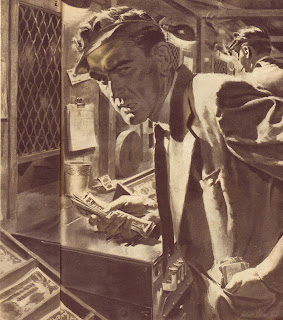 Dave and Johnny are also competing for the same girl, a little button-sized blonde name Joanne, the daughter of a dog owner. Joanne can be "content with a hamburger and a drive-in if that's all you can swing," but she prefers better things, things Dave seems to be able to afford and Johnny can not. The line manager has secretly asked Johnny to keep an eye on Stan and to report any improper activities he sees, but Johnny senses that it's really Dave he's after, although he can't figure out why he doesn't ask directly. Johnny knows that all he would have to do is tell the manager that Dave is playing out of the box and he would be fired, giving him free reign to woo little Joanne, but that is something he just can't do.

Then, on a busy Friday night, "the kind of evening the Chamber of Commerce likes to think Florida has all the time," a huge crowd keeps the betting windows continually busy, but not enough for word to spread down the line: "Davey is ailing." Playing out of the box, he went heavy on Dancing Ann and lost big. He's trying to get back even but makes bad choices on every subsequent race.

"It was vicarious disaster. It was a little like watching a man cut his own throat, slowly"

When they finally get a break Johnny asks Dave how deep he is in. "Eleven hundred," Dave tells him, his eyes tired and expressionless. Johnny knows that "management can be very, very difficult" if you check out short, and there's only one more race that evening. Dave bets big and the result is... a photo finish.

"Long Shot" was one of MacDonald's favorite short stories and he included it in his 1966 anthology End of the Tiger and Other Stories. All the little details of the track, the smells, the heat, the sound of the infield brass band are etched beautifully by the author in his spare, direct prose. But the real picture of the place is the overpowering lure of money and the big win, the lines at the window, the sound of the bell every time a ticket is sold, the constant flow of greenbacks in pursuit of the ticket you don't have to tear up.

"... money is the pulse of the track. Gambling is the only reason for the existence of the track. Money beats in the air like a drum you can't quite hear."

It's just another world MacDonald allows us to live in, to experience briefly and memorably, departing a little better educated and somehow enriched by it. It is the great gift of fiction and MacDonald could pull it off as well as anyone.

Incidentally, "Long Shot" appeared in another JDM anthology, the notorious Two, an unauthorized collection of -- yes -- two short stories from Argosy that surprised everyone (MacDonald included) when it appeared in bookstores in 1983. MacDonald's attorneys prevented subsequent printings and it has become one of the rarest of JDM titles. It's worth looking for as the only place the second entry - the novella titled "Jail Bait" -- was ever reprinted.
Posted by Steve Scott at 7:04 AM

Labels: Anthologies, Argosy, End of the Tiger and Other Stories, Two