"But Not to Dream" 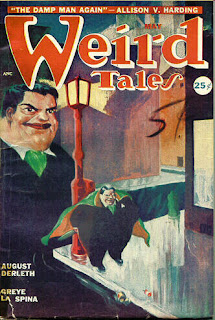 A few weeks ago I wrote a piece on one of John D MacDonald's rare attempts at writing a fantasy/horror story, the 1949 Weird Tales monster shocker "The Great Stone Death." It was definitely one of MacDonald's misfires and I offered the opinion that "we can be thankful that [horror] was not a field the author pursued afterward." I had completely forgotten that the other JDM Weird Tales entry "But Not to Dream" was an excellent bit of writing and had even been included in JDM's science fiction anthology Other Times, Other Worlds. It pays to do a little research. And although I can still be thankful MacDonald chose mystery as his primary interest in writing, "But Not to Dream" proves that he could do horror as well as he did anything else. Appearing only four months after "Stone Death" in the May 1949 issue, the 3,400-word tale contains many of the elements of classic horror but succeeds primarily because of its humor and a kind of wry unseriousness that MacDonald would develop more and more as his career progressed.

The blurb on the back cover of Other Times, Other Worlds advertises "But Not to Dream" as "The startling tale of a scientist who prefers the strange and elusive world of insects to his own family," and why not? Considering the family of Professor Morgan Nestor, you would too. He a milquetoast of a man and an entomologist to boot, a scientist who prefers the world of bug academia to other forms of social intercourse and who, for twenty-four years has taught the subject at Lavery College in Willowville, Ohio. As the story begins he is sitting on his front porch attempting to read an interesting research paper but is distracted by the sound of his wife Sara, rocking intently on the opposite side. He's waiting for her inevitable attempt at starting a conversation, one he knows from experience will not be pleasant.

"He tried to associate Sara with the deliciously helpless and winsome little female who had occupied the second seat in the third row in the first classroom of his teaching career, twenty-three years before... He remembered wide, gray eyes, fragile bones, cobweb hair and hands that fluttered. He gave Sara a sideways glance. The wide gray eyes had narrowed. The fragile bones were buried in all too solid flesh. The cobweb hair had acquired the consistency of fine copper wire, and had turned steel gray. The hands no longer fluttered."

Sure enough and as if on cue, Sara speaks, with a voice that had "the thin sharpness of a fractured flute." She demands to know who wrote the paper her husband is reading. When he tells her, she responds with an abrupt "Ha!"

"The explosive little sound blasted across the porch and seemed to whip down the quiet, shady street, disturbing the leaves of the silent maples."

Right away, from the locale, the situation, and the insect-like characteristics used to describe the young Sara, the reader begins to feel like they are in Bradbury Country, with MacDonald channeling that great writer.

Sara gets right to the point. She wants to know what her husband is going to do about getting their son Robert a teaching job with the college. After all, he's a "delicate and sensitive" boy and would probably do a whole lot better in twenty-four years of it than Morgan has. When Morgan tries to explain that it would be most difficult, considering that Robert flunked out of three colleges -- including Lavery -- before they found an institution willing to graduate him, Sara threatens to go to the dean herself. At that moment, Robert comes around the corner of the house, swinging a golf club and littering the lawn with divots. He greets his parents with a "Hello, soaks."

"A psychologist would label Robert as socially immature, with a low attention factor. He was blonde, with a stubble of beard on his ripe jaw, a band of fat around his middle."

When his mother triumphantly informs him that his father "has promised to speak to the dean" about getting him a teaching job, Robert's response is "Coeds, here comes Robert!" As Morgan looks at his son and wonders how it could be genetically possible for him to have sired such a loser, he hears the sound of clinking glass from within the house. Soon his married daughter Alice emerges and joins her family on the porch.

"Alice had followed her usual schedule of arising at ten, eating lunch at noon and going back to bed at four-thirty... Ever since she had reached the age of fourteen Morgan had seen her become more and more like the Sadie Thompson in a low-budget production of Rain. No power on earth seemed to be able to keep Alice out of shiny black dresses, dangling earrings and a mouth painted to resemble a smashed strawberry... He had long since decided that her faintly unclean look came from putting makeup on top of makeup ad infinitum." 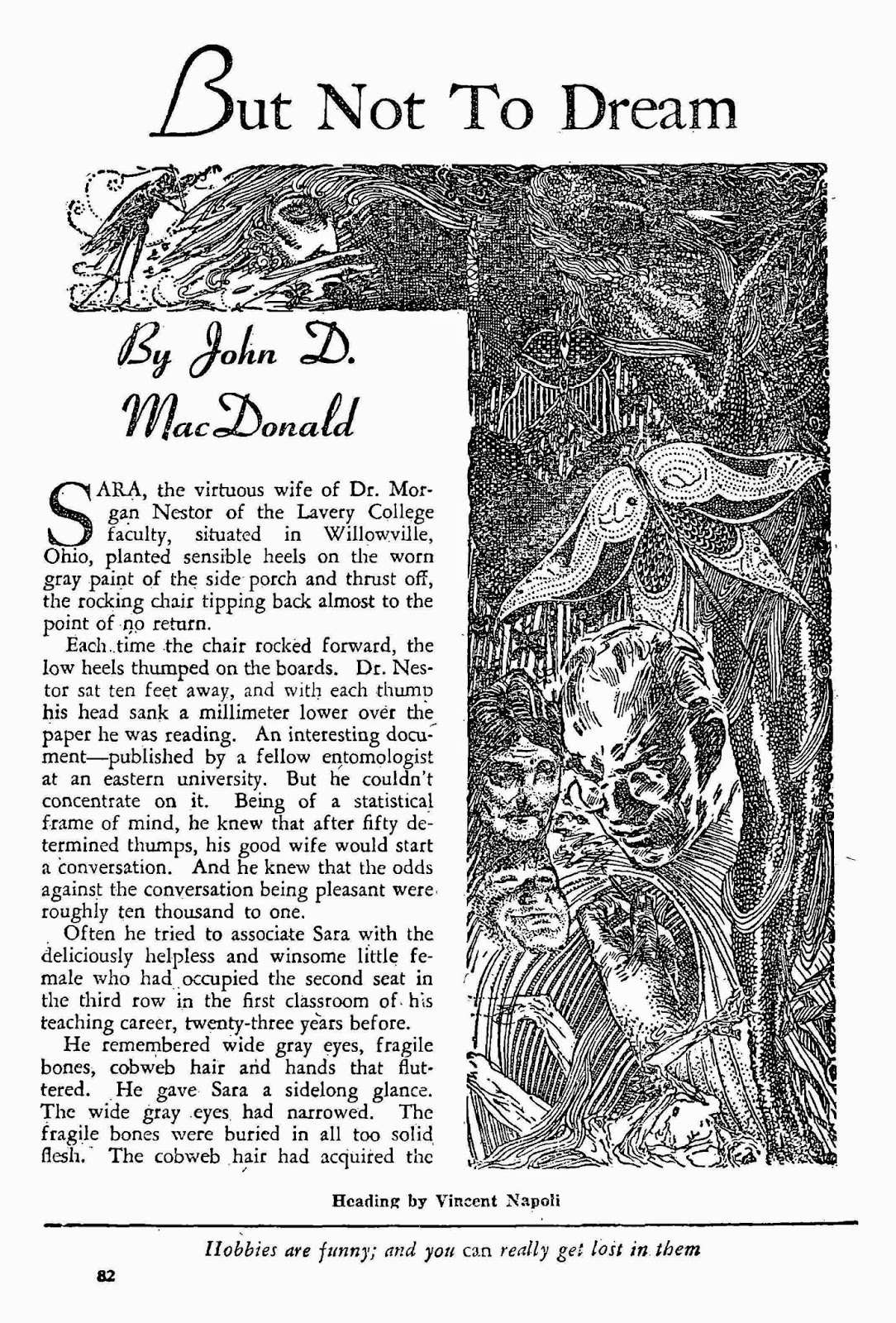 The glass Alice is carrying supposedly contains water, but Morgan knows it is really straight gin. She dips into her secret stash after arising for the second time each day, and by dinnertime each evening she is the life of the party: "gay, flushed and jovial." Sara, who is apparently ignorant of this problem, often remarks, "Alice has such spirit!"

At five the final member of the family arrives home from work, Alice's husband Charlie, a loud, brash, self-important lout who manages a chain of local grocery stores. He's just been promoted again and is happy to make the announcement, to Sara's delight and Alice's indifference. When Sara points out that in five short years Charlie makes more money than Morgan does after twenty-four, Charlie slaps him on the shoulder and consoles him: "You tell her, old boy, that the business I'm in would kill you in a year. It's a high pressure deal, is what I mean."

After Charlie tricks Morgan with a book of gag matches, sending a large chemical snake writhing from the end of the matchstick, the entire family laughs uproariously at Morgan before heading in to dinner. Morgan is stoic about the abuse he has received because he knows that once dinner is finished he can retreat to his own fortress of solitude, his study, the one room in the house where he can go, close the door and lock out the rest of his family, leaving him alone with his books, his papers and his display trays of mounted insects, their wings glowing with "rare and delicate beauty."

But this is a horror story, so even that solace is denied him. At dinner Charlie mentions that as the result of his recent promotion he will need an office, and what better location would there be than that old study of Morgan's. "Hell, you don't seem to use it for anything that I can see." Now this is too much, even for Morgan, and shouts a definitive "No!" He looks to his wife for support and sees only scorn:

"'Look at him!' Sara said with a savage smile. 'A little boy losing his candy cane. For heaven's sake, Morgan. Grow up! Where are all the papers you were going to write in that study of yours? Where is the wonderful fame you were going to have? You might as well face things. The best thing you can do is try to hold your job until they're willing to retire you. Now stop acting like a child and march into that study and start packing those silly trays of bugs.'"

I said this was a horror story, didn't I? I can't imagine a worse fate than losing my den! Well, since this is a horror story, things do get worse, and supernatural things begin to happen, or at least it seems that way. Yet it is the wonderfully comic prose of the first two-thirds of this tale that make it a standout, the over-the-top awfulness of Morgan's family, especially his wife Sara. As editor Martin H. Greenberg wrote in his brief introduction to the story in Other Times, Other Worlds, "But Not to Dream" contains "one of the bitchiest women in science fiction."

The basic plot featuring an eccentric, socially-clumsy loner with a unique specialization and a spouse who just doesn't get it is as old as Fantasy itself. It was especially popular in the literature of the pulps and possibly mirrored the lives of the authors who used it so much. Its version in mystery stories usually evolved into plots to kill the offending spouse, typically with a twist of an ending. The science fiction-fantasy-horror versions always ended with some horrible, impossible yet deeply satisfying conclusion that sometimes involved death but always turned out to be some form of escape.

I mean, how could you take a man's study away from him?