"Dorothy and I have come back into the country at many places and encountered many varieties of behavior in Customs lines. Each port and airport seems to be a fiefdom, where the behavior is a product of the quality of leadership of the Customs Agent in Charge. Arrogance, indifference, insolence, and contempt flourish at some stations, while at others there seems to be an attempt to help the returning citizens make the best of a clumsy situation.

"The worst we know of is Miami International Airport. Coming back through Miami is a degrading and exhausting experience. Politicians and officials are hustled through and never get a chance to see how wretchedly the incoming people are treated. As the carousels pile luggage into the stifling room, long lines of people shuffle toward the inspection stations, pushing all their luggage along the dirty tiles, sometimes for up to five hours.

"Miami is the gateway to the United States for much of Latin America and all the Caribbean Islands. By the time foreign nationals reach Customs, they have been cleared through Immigration. In Customs, foreign nationals, unless of middle years and fashionably dressed, are considered guilty until a search proves them innocent. Bored inspectors make them dump all the contents of suitcases on the counter and unwrap every gift being brought in, and then they exhort the visitors to 'hurry up, hurry up, get that stuff packed and move along.'

"U.S. Customs has built up over their years in the Miami International Airport a heritage of hate and resentment that no amount of official Good Neighbor acts in other dimensions can hope to outweigh. It is in Miami that the most obvious discrimination against the poor and the dark-skinned persists.

"Customs inspectors are border guards, secure in their authority and their seniority and their immunity from any kind of discipline which might arise as the result of a citizen's complaint. In any confrontation, they have the ultimate weapon, that big book of rules. Their goals are the proliferation of paperwork and the avoidance of any decision which might get them into trouble. At their very best, their beefy jocularity is patronizing, like a prison guard who tries to be a nice guy."
Nothing Can Go Wrong (1981) 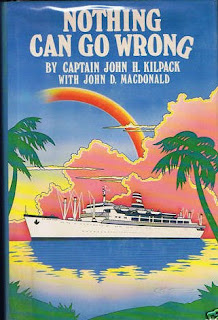 Labels: Nothing Can Go Wrong, Quotes from Non-Fiction