JDM on Books on Disks (and "intellectual poseurs") 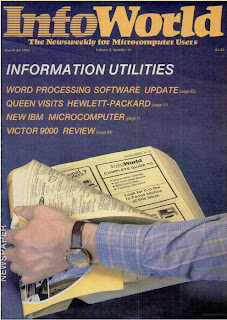 This is a letter to the editor that appeared in an old computer weekly called InfoWorld. Printed in the March 28, 1983 issue (yes, 1983 is old when we're talking computers), it comes from the days when everything was text-based and programs listed their memory requirements in kilobytes. The editors decided to turn MacDonald's letter into a featured piece in their "Feedback" column, giving him a byline and a one-sentence bio. You don't really need to read the articles he is responding to in order to understand and enjoy this piece. The article by Keith H. Knox is obviously one of those intellectually superior bits MacDonald loved to skewer -- and skewer him he does.

His predictions on the future of electronic publishing are also pretty prescient -- at least so far...

Because some 90 million copies of my 72 novels have been sold worldwide, and because seven of my last eight books have been on the New York Times Best-seller List, and because, since March 1981 I have been using an Archives I, WordStar and Diablo 1640 for all my writing and correspondence, I feel competent to respond to Allan Stein's "Books on Disks" (InfoWorld, November 8, 1982), but more particularly to Keith H. Knox's long comment in the January 24th (Vol. 5, No. 4) issue.

At first I thought Knox's essay was an elaborate put-on. After the first ten paragraphs I decided that he was another one of those humorless 17-year-olds one often encounters in computer circles. Then I came upon his assertion that he moves his family every six months, abandoning his dime-store novels or passing them along to others.

Knox has, apparently, a case of arrested development caused by too intent a concentration on the techniques of a narrow field of endeavor.

Most educated and civilized people of my acquaintance are willing to admit that fiction has expanded their awareness of self.

Because of the requirements of a transient populace, and the increasing expense of hardcover books, fiction of lasting value by Vonnegut, John Irving, Wouk, Faulkner and many others are sold in paperback in large quantities in grocery stores, drug stores and from newsstands.

God only knows what Knox means when he refers to "serious books," "special books" and "serious writers." When he speaks of "fighting lines at your local bookstore," one is forced to wonder what sort of world he lives in. Anyone who has fought a line in a bookstore in the past ten years, please rise.

Knox says he wants to acquire a text on fluidics or the libretto for Carmen at 3:00 A.M. I can see how such compulsions might result in his having to move every six months.
What I most resent is his classification of mass-market paperback books as "penny dreadfuls" for "bodice-ripper readers." I smell that fearful intellectual intolerance of the truly narrow academic, the man who thinks the rest of the world is wasting its time and energy on frivolities while he is concerned with total significance. He says he reads for a living. Hmmm.
Let me review today's situation as regards the computer in publishing. Arthur C. Clark sent the entire manuscript of his current best-selling novel 2010 from Sri Lanka to Random House/Knopf/del Rey on a single double-density 5 1/4-inch disk.

There, due to the inertia in the whole industry, and the firm grasp the printing people have on the whole area, the disk was turned back into manuscript and, after copy editing, the manuscript was turned into computer tape to activate the Compugraphic typesetting equipment.

If you would be thrilled by watching the galloping advance of a major glacier, you would be out of your mind watching changes in publishing. That false step, however, will be eliminated soon.

I imagine that by the time I finish the book after the book I am now working on, I will be able to transmit the entire text by phone to my publishers. They will capture it on disk and will do the copy editing on the screen -- inserting a key wherever they have changes or questions. I will have a hard copy of the manuscript at my desk so I can make comparisons. Then their disk version, as approved by me, can go directly into page proofs for final editing.

The end product will be books just as before, for a long time to come. I would venture a guess: If books on disks become the province of the academics, we will have, in limited editions, the same sort of turgid, self-conscious, nonobjective prose one finds in the "little" magazines, promulgated by intellectual poseurs. They, naturally, will designate these outpourings of their beautiful souls as, "a renaissance of American literature in dramatically new forms."

Meanwhile, the rest of us who work and write as well as we can, and seek our share of an audience estimated at 7% of the population, will use the tools of the computer revolution whenever they save time and effort. When publishers are ready to change to another format, we will be ready too.