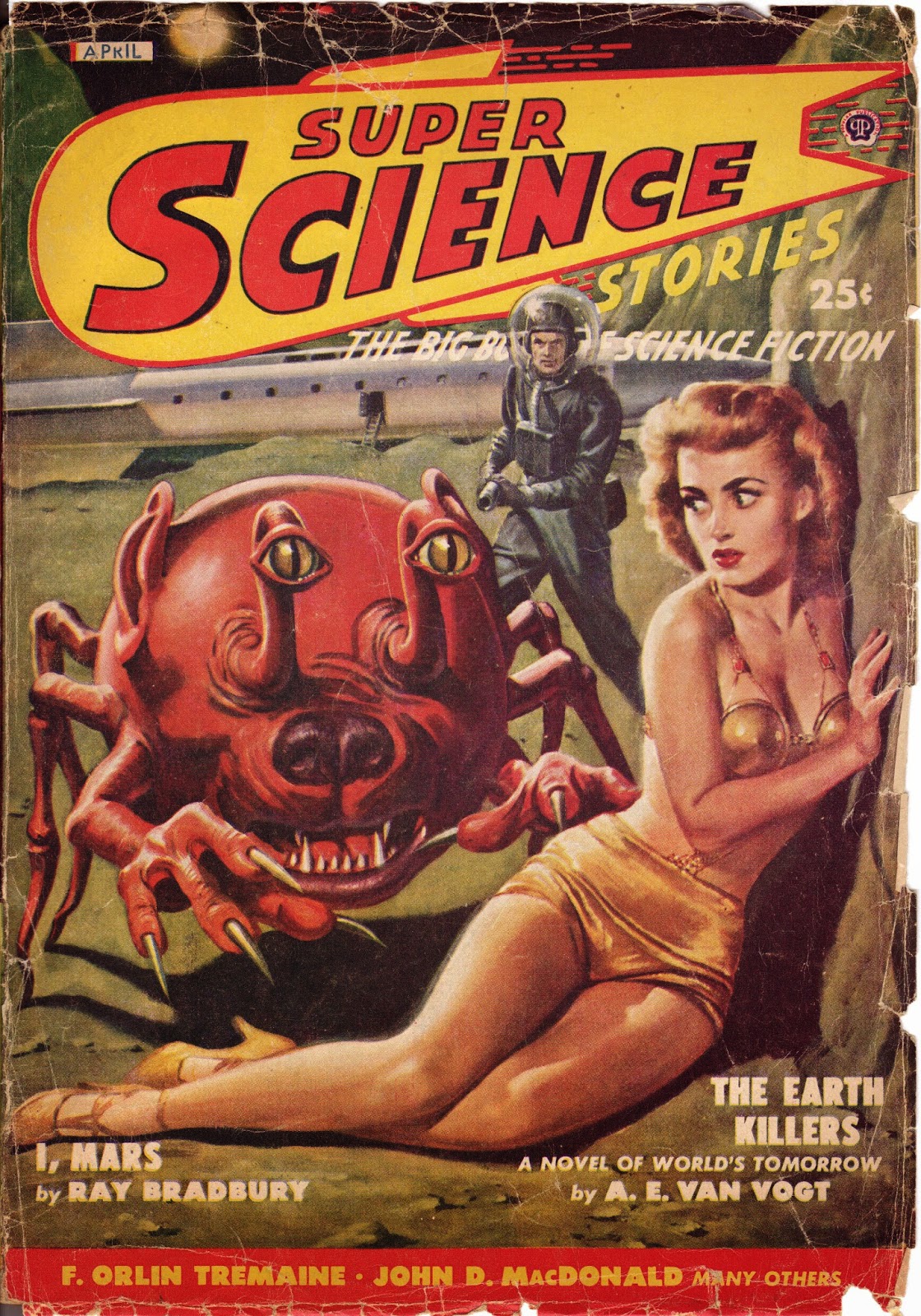 "One man sat in his death cell, hoping for the miracle he knew would never come. Another watched him, owl-eyed, across the abyss of time; and neither dreamed that their lives were bound up together—that of these two, who were separated by centuries, one must die for the other!"

"All Our Yesterdays" is a John D MacDonald time travel story, a work of science fiction that originally appeared in the April 1949 issue of Super Science Stories under the house name of John Wade Farrell. The pseudonym was necessary since MacDonald had another story -- "Death Quotient" -- in that same issue under his own name, and pulp editors rarely if ever allowed two stories to appear with the same author's name. In addition, MacDonald had a third story in that same issue, "Delusion Drive," under yet another house name, Peter Reed. And one wonders why the exact number of JDM stories is still a subject for debate...

The subject of time travel was an immensely popular one in the science fiction pulps of the forties and fifties, although MacDonald doesn't seem to have employed it often. His use of it in "All Our Yesterdays" falls more into the category of "time paradox," that subcategory of time travel where careless actions while in the past reshape those of the present and future. Its most notable example is perhaps Ray Bradbury's 1952 story "A Sound of Thunder," where the mere act of killing a butterfly in the Mesozoic Era causes subtle-but-major changes in the present, much to the horror of the perpetrator. And although "All Our Yesterdays" predates Bradbury's tale by three years, the time-paradox trick had been around since at least 1938 with Jack Williamson's The Legion of Time, and I'm sure the s-f expert could cite earlier examples. MacDonald's perhaps-unique approach to the subject involves a futuristic initiate class who are permitted to observe the past, not by travelling themselves, but by sending some sort of unseen camera and microphone back so that they can look but not interfere.

Ghan the younger is a "tenth-level" crime-seeker on future Earth, a relatively high-level initiate whose job it is to observe crimes taking place in the past on a three-dimensional screen in his home. The focus of this effort is to view instances where justice has miscarried and Ghan's favorite era is mid-twentieth century United States. The powers that be are well aware of the dangers of attempting to manipulate the past, which is why only tenth-level mentalities are permitted to use the machines. While the devices they use do not permit a body to actually travel to the past, with the proper nudging of the controls one could bring the camera so close that it would be observed and even felt. Their reasoning is spelled out in the story's brief preface:

"It is more than a problem of focus. It is more than a question of intellectual curiosity. Though the tendency is for divergence to swing back to norm, it is recognized that objective interference in any case may have a long range effect sufficient to cause objective alterations in present society. Thus, the entertainment quotient of Crime-seeking is perforce limited to those tenth-level mentalities where, due to knowledge, thalamic motivations can be recognized as such, and discounted. Any attempt by a tenth-level mentality to indoctrinate any lesser mentality in Crime-seeking procedure will result in social isolation for an indefinite period. The clearest analogy of the danger of objective interference is that of the primitive man who, clinging to a limb, saws it off between his body and the trunk of the tree."

But Ghan the younger has a problem: he's fallen in love with a "lesser mentality," an eighth level hottie named Luria, "of the cobalt eyes, the honey flesh, the rounded warm arms and soft lips." The couple has been enjoying secret assignations in Ghan's home for a while now, and the only thing he worries more about than being discovered is the possibility that Luria is secretly seeing another eighth level, "a hulking brute of a man" named Powell. The trick then is to keep her happy and occupied, but when Ghan refuses to allow her to see the time machine in action, her first reaction is to threaten to return to Powell. Ghan can't allow that and keep his sanity, so he reluctantly agrees to allow her one viewing. He pulls out a book on twentieth century crime and Luria points at random to a particular name: John Homrik. Homrik was a resident of Kingston, New York back in 1948 and was executed for murdering his child bride Anna, and then faking it to make it appear she had hung herself in the kitchen of their apartment. Ghan adjusts the camera to reveal the death row section of the prison where Homrik is held and it follows him down the green mile as he is strapped into the electric chair and executed. 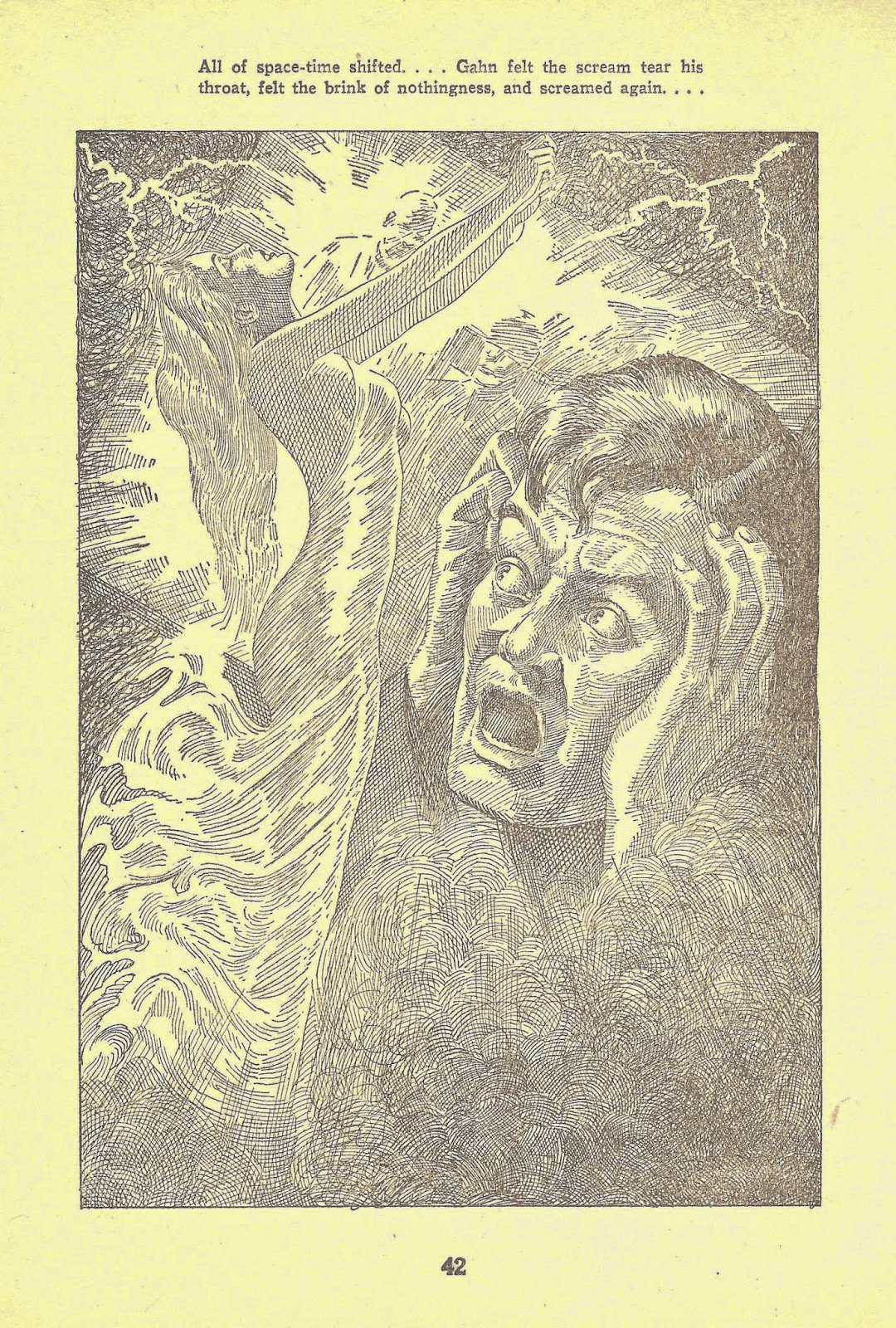 Luria is transfixed, not only at how realistic the three dimensional images are, but at how different men appeared back in that dim past, "...strong and... like a man. In these days there are no men like that." Luria immediately asks Ghan to allow her to see the actual crime committed, and having agreed once, he agrees again. They witness the couple at home after an incident of infidelity on Anna's part. Anna is deeply guilty and abject, while John does his best to try and convince her that she is forgiven. They make love and afterward, while John is sleeping, Anna is observed sneaking out of bed, walking into the kitchen and hanging herself. It's a miscarriage of justice, just the type of thing Ghan is trained to look for and he makes a mental note to tell his associates about this particular case. But Luria wants more. Luria wants to prevent the suicide, to prevent Homrik's unjust execution. While Ghan attempts to explain why such an action could change everything they know, Luria climbs onto his lap, chews on his ear and begs him to let her see the suicide just one more time...

"All Our Yesterdays" is a neat but predictable tale, an interesting exercise in plotting and character that allows MacDonald to play the Great Moralizer on a grand scale. It's inclusion in the recent eBook anthology Death Quotient and Other Stories allows the modern reader a chance to enjoy this fable for the first time in sixty years, but unfortunately the story suffers from the same sloppy editing that mars the other inclusions in that collection. Here the editors begin the text with the Super Science Stories promotional blurb (included above) as the first paragraph of the story, complete with exclamation mark! Since that is a grammatical immaturity MacDonald never practiced, it's error is obvious. The blurb is immediately followed by the introductory preface quoted earlier, making the lurch into the actual narrative jarring indeed. I was an early purchaser of this eBook, and I bought the Acrobat version, so perhaps these errors are not present in other formats, or they have hopefully since been corrected.
Posted by Steve Scott at 7:04 AM