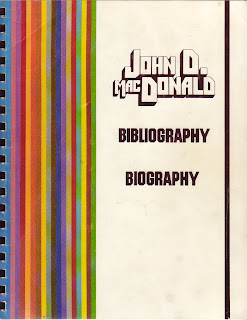 The July 1980 issue of the JDM Bibliophile contained the following paragraph at the end of "The Shine Section":

"For those who wish back issues of bibliophiles we have assembled a packet of all of them through number 21. They are available, the Moffatts having consented, for photoduplicating by you at your own expense, if you will (a) promptly on receipt notify us by letter that you have them, (b) expeditiously have them reproduced, (c) mail them first class, certified or insured, to the next person on the list you receive, or await instructions from us, and (d) when mailed, notify us you have done so.... There is a list so please be patient."

I had my request in the mail that same day.

I especially wanted a copy of the fabled "Master Checklist" that had been prepared by the Moffatts, listing all of John D MacDonald's stories printed in magazines since 1946 (nearly 500!) I received a nice acknowledgement from the Shines letting me know that I was now on the list and to expect the issues in a month or two. As a haunter of used bookstores I frequently encountered old pulp magazines for sale and wanted that list to aid me in collecting more MacDonald. I'd already read everything that was available and I wanted more! The Bibliophiles eventually arrived, I made photocopies of them all, but noted that there were a few issues missing. Fearful that I would be blamed for losing something so valuable, I immediately wrote a letter to the Shines.

When I say "The Shines," I am speaking of Walter. Although every column, letter and Christmas card was signed "Jean and Walter Shine," I got the strong impression that Jean was the silent partner of the duo. Walter, I learned later, was a retired attorney who had worked for the Department of Justice, the ACLU, the American Jewish Congress Committee on Law and Social Order, and was a co-founder of Toys-R-Us! He had argued the case that stopped restaurant discrimination against Blacks in Washington, DC and was responsible for getting cigarette smoking banned in Palm Beach malls.

At the time, I was a bank teller.

Still, he could not have been nicer to me. He had been researching the works of MacDonald since 1977 with all the energy and precision he had used in the practice of law. He and Jean lived in North Palm Beach, Florida and made frequent trips to Gainesville, where the John D MacDonald collection was housed at the University of Florida. He was an avid boater and a man of limitless energy. I guessed that Jean was his second wife, but never learned one way or the other and never asked. In a bit of serendipity (or synchronicity) he told me that he once lived in the Grosvenor apartments in Bethesda, Maryland, close to where I grew up. I knew the place, a huge complex of three high rise buildings on Wisconsin Avenue right outside of the Beltway, because the father of a friend of mine had moved there after separating from his wife. That friend was the person who introduced JDM to me and, I believe, his father had introduced the books to my friend.

I began sending Walter bits of information I would unearth about MacDonald. Stephen King's praise of MacDonald was the first thing I sent. I sent lots of info regarding the adaptation of MacDonald's work to film and television. I once sent an item from an issue of Washingtonian Magazine revealing that then-Vice President George Bush's "favorite reading matter" was "John D MacDonald detective novels". (It was the response to this bit of information that revealed to me Walter was not a Republican!)

The Shines' grand opus was the Bibliography. Published in 1980, it was a massive expansion on the Moffatts' Master Checklist, running 209 pages and listing books, short stories, newspaper columns, television and film adaptations, pictures of First Edition covers and a brief biography. It also contained sections listing articles about MacDonald written by others, book reviews and letters to the editor MacDonald had written. I ordered my copies (I had to have two, for some reason) in April of 1980 and received them soon thereafter. Even before the Bibliography was published the Shines had begun preparing an Additions and Corrections addendum to be published independently, subsequent to a second version which Walter knew would have to be issued. First and foremost on his mind were a group of about a dozen (if I remember correctly) short stories MacDonald had sold to magazines, but which he had been unable to locate. He could find nothing about them in the Collection (except for the original manuscripts) and MacDonald himself had no recollection where or if they had been published. There were many pulp magazines he had not checked first hand, but the only available copies to review were with the Library of Congress in DC, and he was in Florida.

It was with great excitement that I volunteered to look for him. I lived less than ten miles from the DC line and would be more than happy to do the work! Walter made the arrangements (the magazines were housed in the Library's Annex in Adelphi, Maryland, but had to be reviewed in Adams Building in DC) and, once the magazines arrived, I drove downtown in my rusty VW and became a researcher.

Fans of MacDonald will know that he was a writing machine in the late 40's and early 50's, churning out an amazing amount of product in a relatively short period of time. In 1949 -- his busiest year ever -- he published 73 short stories! Many were published in the same issue of a magazine, necessitating the usage of a pen name for the second, third or even fourth story (the July 1949 issue of Fifteen Sports Stories contains four stories by JDM, and only one, "The Glory Punch," lists him as the author). His pen names -- "Scott O'Hara," "John Lane," "Peter Reed," "John Wade Farrell," "Henry Rieser" and " Robert Henry" -- were actually "house names," used by the publishers for any author who may have more than one story printed in an issue. My job was to go through hundreds of old magazines, review the table of contents for each one and, if I spotted one of the aforementioned nom de plumes, to flip to the story. Since these were house names, the identification of one of these names did not necessarily mean I had found one of the missing MacDonald stories. Walter had supplied me with the first paragraph of each of the missing stories, so I could compare it with the magazine story. The editors were notorious for changing the titles MacDonald assigned, so checking by title alone would have been unreliable.

It was long work and there were scores of boxes, filled with old, crumbling magazines with their still-colorful, outrageous covers. When I was through with the shipment brought over from the Annex, I descended into "the stacks", the multiple floors located below the three LOC buildings that house the contents of the library. What an adventure that was! These vast floors were florescent-lit caverns filled with row upon row upon row of shelves, housing books and magazines as far as my eye could see. The only sound down here was the occasional opening and closing of an elevator door and the clack of the track system used by the librarians to move books from their floor to the reading room. It was a wonderful experience for me and quite an education. Unfortunately I didn't unearth a single missing JDM story. When I wrote Walter -- in a five or six page typewritten letter he forwarded on to MacDonald himself -- he responded encouragingly, recalling a story about Thomas Edison:

"When Edison, after finishing the 964th experiment (unsuccessfully) for a filament that would burn in his light bulb, was asked 'Aren't you heartsick with all those failures?' he replied 'Not at all. We now know 964 things that won't work.'"

As a thank you he included a copy of MacDonald's original manuscript of "Worse Than Murder," which had never see the light of day since it was originally published in the November/December 1947 issue of Doc Savage magazine. What a treasure! And although my usefulness to him was pretty much over (I continued to supply items for his column and even got mentioned once or twice) he and Jean continued to correspond and send me and my wife Christmas cards every year up to 1989. He gladly sent me more copies of original manuscripts of otherwise-unavailable short stories, until I had over thirty. He sent me a mockup of several chapters of the Shines' next publication, A MacDonald Potpourri, asking for suggestions and corrections. Our correspondence waned over the years, until in 1990 I noticed "The Shine Section" missing from my latest copy of the Bibliophile. I wrote him and received a quick reply, informing me that he and Jean had been unhappy for years about the direction the BIB had taken since the Moffatts turned over the reins, and they ultimately decided to strike out on their own with a different JDM newsletter. MacDonald was dead by this time and I was curious how the BIB itself was surviving, let alone how a new publication would fare. It didn't matter, as it turned out: I don't believe they ever published an issue. 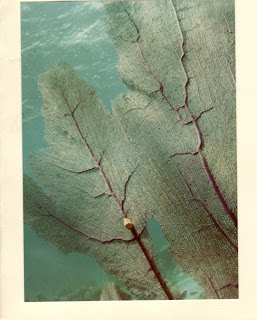 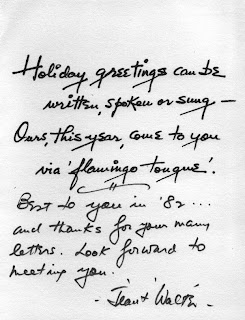 That was the last I heard from him. I saw his obituary in the Washington Post in 1997 and was amazed how accomplished he was. Up to then I just thought he was some old retired guy. I regretted that I never had the opportunity to meet him and Jean in person, as I never made it to a single JDM Conference or BoucherCon. To me he was a gracious and kind man, yet a perfectionist and supremely confident in his own opinions. Fans of MacDonald owe a great debt to him. He and Jean helped edit two latter-day MacDonald collections, The Good Old Stuff (1982) and More Good Old Stuff (1984). Their Bibliography is an indispensable resource for MacDonald fans, and their A MacDonald Potpourri (1988) and Rave or Rage: The Critics & John D MacDonald are wonderful additions for the completist.

I mentioned that Walter had forwarded my 1981 letter to John D MacDonald. It was a measure of the kindness of the man that he later sent me a copy of the memo to MacDonald that accompanied my letter, along with JDM's reply to him. He knew that it would mean a lot to me and that I would treasure it. I did. Thanks Walter. 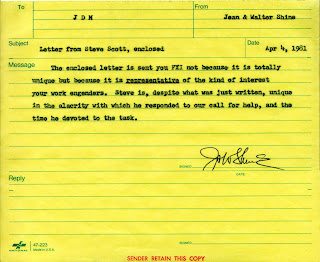 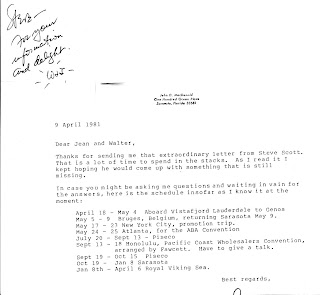