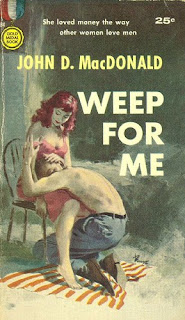 Ah... Weep for Me. The Holy Grail of John D MacDonald novels.
Published in December 1951 as a paperback original, Weep for Me is generally counted as MacDonald's fourth novel, although some issue dates would list it as his fifth, following Wine of the Dreamers. Without getting too picky, we can safely say that it was one of three novels he published in the second half of 1951, along with Judge Me Not and Dreamers. It did not receive a second printing until June 1959, where it featured a cover nearly identical to the original, yet drawn by a different artist. Some early novels received subsequent printings throughout the 1950's, such as The Brass Cupcake and Judge Me Not, but most didn't get reissued until the end of that decade, so Weep for Me is not unusual in that respect. It is, however, the only early MacDonald novel that was never reprinted again in his lifetime.

Quite simply, the author himself felt it was a work below his standards, a failed attempt at a pastiche of another writer, and he gave the orders not to republish. Between the two printings, a total of 567,000 copies of the paperback were issued, yet it's a book that is almost impossible to find, even back in the 1970's when I was searching the used book stores of Washington, DC. The Internet age has made finding copies a bit easier, yet the prices are beyond the range of all but the most serious book collectors (or readers with lots of disposable income). I myself have never read the book.

The plot goes something like this: Kyle Cameron, a 29-year old bank teller living in the fictional town of Thrace, New York, is engaged to be married to Jo Anne Lane, a blonde, blue-eyed virgin who is also employed by the bank. Kyle is an ex-serviceman who had been stationed overseas, where he engaged in several sexual affairs, and his decision to wed Jo Ann seems to him more like a surrender than a willing leap into a new life. He spends the days at the bank looking through the bars of his teller window at the pretty girls outside in their summer dresses, and thinks of Jo Ann, with her "incipient roll of fat around her middle," their future life together: "three kids," "the joy and misery of a normal contented marriage," and "[standing] on [his] flat feet behind the teller's window until they promote ... or retire [him]."

Then he meets Emily Randolph, a new bank employee who works upstairs in Accounting. She is everything Jo Ann is not. Dark, beautiful, with a strong sexual magnetism, Emily quickly becomes Kyle's obsession, and after a few lead-footed overtures to her that are emphatically rebuffed, he is driven into a frenzy and begins to choke her one night. This is apparently something Emily can relate to, she becomes aroused and they make love. Afterward she explains to Kyle that she will be expensive to keep -- as in $250,000 expensive -- and the two of them concoct a scheme to embezzle the money from the bank. After some initial hesitation, Kyle agrees, dumps Jo Ann (whose mother has just been diagnosed with cancer), steals the money and takes off for Mexico with Emily.

Then things really get out of control.

Emily has been keeping in touch with an old boyfriend, who is following the two as they escape out of the country. He and Emily plot to kill Kyle, but Kyle manages to turn the tables and kills the boyfriend. Once the couple reach Mexico, their plan is to pay an old acquaintance of Emily's to arrange for their ultimate passage to Argentina, beyond the reaches of extradition. But this acquaintance has his own ideas, and the world of Kyle and Emily quickly devolve into nightmare.

This reads like any number of Noir novels or films of the era, yet MacDonald claimed it was James M Cain's work he was aping in Weep for Me. There are a few plot similarities to Cain's Serenade, but the relationship between the femme fatale Emily and the helpless-to-resist Kyle comes straight out of The Postman Always Rings Twice, or even Double Indemnity. In 1977 MacDonald characterized the novel as "really quite a bad book... imitation James M. Cain ... with some gratuitous and unmotivated scenes." Earlier he had stated, "It should die quietly in the back of used paperback book nooks."

There have been three reappraisals of the novel published (that I know of), all of them in the pages of the JDM Bibliophile. To a man (and woman), they all assert that the book is far better than MacDonald claimed it to be and, while not perfect, state that it would stand with the rest of his output quite nicely. In 1968 (BIB # 9) Michael Avallone wrote "Weep for Me... isn't bad at all; it simply didn't strike the same funereal notes that Cain's classic does. Still, as early John Mack, it is very good indeed..." Later, in 1990 (BIB # 46), Don Sandstrom -- working from research done by Purdue English Professor Peggy Moran -- wrote, "Whatever John D. may have thought of this early work, it remains a very readable and enjoyable story. It contains evidence of his narrative power and his understanding of the human condition. I have read many new books in hardback that did not come up to the quality of this novel."

Then, in 1999 (BIB # 64) Ellen Smith wrote the best and most detailed review of the book, recounting how she came to find a copy, quoting copiously from the text of the novel, and providing some nice insight into the themes, imagery and symbolism of the writing. She wrote that the novel contains "a forceful narrative, well-drawn characters, convincing settings and significant themes. It's a real page-turner." She points out the "unified imagery" of the teller-window bars, the foreshadowing discovery of a man's shoelace in Emily's ashtray, and includes a very nice quote that really makes MacDonald's debt to Cain apparent: "[This feeling reminds me when,] as a little kid, I fell into Palmer Creek in the early spring. The water ran fast and deep and black."

I spent many years looking for a copy of Weep for Me in the various well-stocked used bookstores of Metropolitan Washington, DC. I was eventually able to locate and purchase first editions of most of MacDonald's output, but never found Weep for Me. The closest I ever came was in a used bookstore (now gone) on Morrison Street in DC. The owner of that establishment (a dead ringer for the "Comic Book Guy" of The Simpsons) informed me that he once had someone come in and try and sell him a copy, and for a very high price, but an inspection of the book revealed a broken binding and several missing pages. He sent the guy packing. He warned me it would be unlikely that I would ever find a copy simply sitting on a bookstore shelf. It's value was known to even the most amateur of booksellers and would be snatched up immediately. This was in 1979, and he proved correct.

Current prices for used copies are staggering, as high as $950 (this for an autographed edition with the inscription, "Eddie please burn this bad book! John D. MacDonald"). 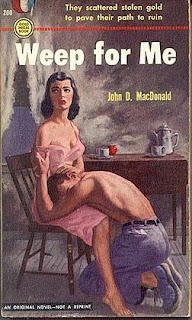 Donald's son Maynard, who is the administrator of the JDM Estate, permitted a limited edition hardcover reprint of Weep for Me by JDM's UK publisher Robert Hale. There are a few copies of this book floating around on the 'net, most pretty expensive, but not as costly as copies of the two paperback editions. I'm surprised Maynard gave the permission, considering his father's wishes for the novel's burial.
The only thing more surprising would be for him to agree to allow another Travis McGee film. Oh, wait...

It's my opinion that the artwork for the second edition is superior to the first, even though it is a copy of that cover, so I placed the second edition at the top of this blog post. That cover was illustrated by Barye Phillips. The original was created by Owen Kampen.
Posted by Steve Scott at 7:10 AM