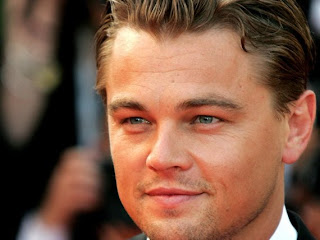 One of the things that reawakened my interest in JDM was the recent announcement that The Deep Blue Good-By was, at long last, going to be filmed and that Travis McGee was going to be played by ... Leonardo DiCaprio?! At first I was horrified. It was so wrong on so many levels that I can't even begin to go into them all. McGee is a 6' 4" ex-football player with a deep salt-water tan and who was described in one novel as "spectacularly huge." Although the IMDb lists DiCaprio as standing 6' tall, he certainly doesn't look it, even in Hollywood, the land of little people. For years fans of McGee have longed for the right actor to play their favorite MacDonald character and have already been disappointed twice, once by Rod Taylor (mild disappointment) and once by Sam Elliott (deep disappointment). My favorite match for McGee would have been a young Robert Ryan, although his youth predated the series, or a young Clint Eastwood, but Travis is far more gregarious than any character Clint ever played. Contemporary actors who spring to mind are David Boreanaz or Nathan Fillion, but neither of them are really tall enough. Thinking about DiCaprio, I realized that he would make a better Junior Allen than Travis McGee. (Hey, maybe...) 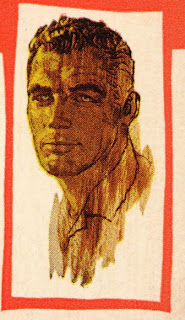 And yet... DiCaprio is one of my favorite actors and he has a great talent and a good range. He is my all-time favorite movie Romeo, possessing more energy and passion than all the other middle-aged geezers combined who have played the part on screen before. I just saw him in Revolutionary Road, a film based on the 1961 novel by Richard Yates, and which made me think about possible adaptations of some of MacDonald's contemporaneous novels that covered the same ground, like Cancel All Our Vows and Clemmie. DiCaprio was excellent in Gangs of New York, and Catch Me if You Can was great fun. Despite the lack of any physical similarity to the character he will be playing, he does have the talent to pull it off. With a good script and good director, perhaps the real spirit of MacDonald's writing will be captured once and for all. The good news for those of us who have wanted to see this matchless novel filmed is the fact that DiCaprio is a mega-star and his name on a project will carry great weight in getting it "green-lighted" and into production. And even if the actor doesn't look how we've imagined Travis to be, the story is so good and well plotted that it would take a real moron to screw it up. Think of Elliott and his mustachioed McGee, living in California on a sailboat and dropping his "g"s. Nothing could be that bad... could it?
The only acto 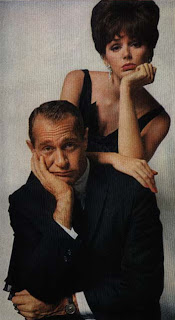 r who has ever really nailed the character is one who never did it in front of a camera. Darren McGavin read 19 of the 21 McGees for Random House Audio Books Presentations back in the 1980's and he portrays Travis (and all the other characters) with more style and depth than either of his predecessors. Interestingly, McGavin once portrayed private eye Mike Hammer on television in the late 1950's. Hammer was the creation of author Mickey Spillane and was, for all intents and purposes, the "anti-McGee," a base, one dimensional, misogynistic sadist. MacDonald had no love for Spillane's writing. The Travis McGee audio books are no longer in print, however used copies are obtainable on Amazon and eBay. And if you look hard enough you can find digitized versions online, although their legality is questionable. I recently listened to the first four Travis books on trips from Maryland to Tennessee and back again, and I have to say the productions were riveting. Unfortunately only abridged versions are circulating, although I have seen unabridged versions for sale, but for very large sums of money. Even the abridged version are worth seeking out.
Posted by Steve Scott at 1:40 PM