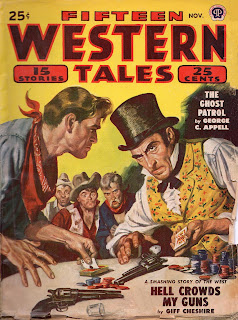 John D MacDonald wrote nearly 400 original short stories and novellas that were published in the magazines of the last century: hundreds of crime stories, scores of science fiction, sports and mainstream tales -- and all of three westerns. Clearly, this wasn’t a genre of fiction that interested the author, and the quality of the stories bear that out. Only one of the three, the last-published “Nine Coffins for Rocking H.” reveals and deep background into the time, place and history of the old west. The other two -- “The Corpse Rides at Dawn” and “Hang the Man High” -- read like plot ideas so preposterous that the author could only fit them into a long-past, western setting. That was certainly the case for “The Corpse Rides at Dawn,” which featured a character weakness that would have been laughed out of any contemporary crime pulp of the era, and it’s also a weak point in the second story, “Hang the Man High!” I’m not sure exactly what MacDonald was trying to do here, but the plot is certainly something that would not have worked in any setting outside of an historical one.

The setting is the fictional small town of Chambers, a remote, dusty place in an unnamed state, built and settled to support the numerous cattle ranches that surround it. The story opens soon after the arrival of a stranger from the east -- in this case, way east, as in Eastern Europe by way of Boston. Stanislau Wadic has come to open a dress shop in Chambers, and he is portrayed as the classic effeminate: timid, fluttery, pinky finger permanently extended, everything but a lisp. Franklin Pangborn comes to mind. His first stop after renting a vacant storefront is to a local carpenter named Chub. The first words out of Wadic’s mouth are “I want wooden woman.”

That was when Chub dropped the pin he was working on and gave himself a shallow cut across the back of the thumb.

"You want a what?" he asked loudly.

"Wooden womans. For to put on dresses in the window my store."

Chub got up and limped over to the windowsill and got his pipe. He said, "Now let me get this straight, friend. You have a store?"

"Today I get it. With window. I paint my sign. Want womans in the window. For cloths."

Chub grinned as the great light dawned. "You want a dress dummy!"

A week later, after the mannequin is delivered, Wadic is in his store window dressing the dummy. It’s late on a Saturday and ranch hands from the surrounding area are pouring into town to enjoy a night of drinking and carousing at the local saloon. But before they get to boozing they are attracted to the strange new sight in Chambers, and congregate in front of Wadic’s shop, observing him at work.

The hands nudged each other and cackled in glee... "Seems downright indecent... Full grown man, too."

"Or, on the other hand, is he? Look how he keeps that little finger bent... There's no place in Chambers for that one"

Once inside the saloon and with a few drinks under their belts, the cowhands -- which include the slab-handed foreman Redneck George and little Tad Morgan, “a hundred and ten pounds of cured leather" -- begin to amp up their resentments.

"We ought to be able to show him somehow... Damn furriner, coming in to mess up our town, gettin' the women all gaga over his fancy cloth. Like as not he stole the stuff in the first place."

Just then Wadic himself enters the saloon and, after a “good evening” to everyone, heads directly over to the bar. With all the ranch hands glaring at him silently, the newcomer asks for wine, is given a bottle of cheap stuff and sips it out of a shot glass. “It is bad,” he tells the bartender. He doesn’t notice that all of the hands have mockingly imitated his drinking gestures, pinkies extended. It doesn’t take long for things to get really ugly and eventually one of the men slugs Wadic.

"Why is fighting? Wadic asked.

"It's the custom for strangers here."

With Wadic preparing to fight by raising outstretched fists and closing his eyes, he is easily beaten and carried back to his apartment above his shop. But the evening doesn’t end there. After a few more drinks the rowdy bunch move to the streets, smash the window to Wadic’s shop and remove the wooden mannequin, tying it to the back of a horse and dragging it through the streets of Chambers. This proves a step too far for the newcomer… 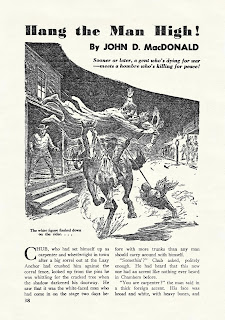 If “Hang the Man High!” was MacDonald’s attempt to deal with prejudice, it was an utter failure, for the only way Wadic gains acceptance in Chambers is by becoming something like one of the good old boys. And while the ranch hands are portrayed as an especially ugly lot, the character of Wadic seems nebulous, like the author had to saddle him with enough obvious and characteristic attributes to make him a target, while also trying to make him sympathetic. It doesn’t really work. And the author’s glib ending, complete with mutual backslapping and “I’m buying you a drink!” lines ring especially false, considering the ugliness that has preceded it.

MacDonald’s brief dalliance in the world of the wild west seems to have been limited to a very short period in his writing career, from April 1948 to December 1949 and, unless I discover something else in the pages of an old Bluebook or Argosy, he never tried it again. The world of fiction is not poorer for that decision.

“Hang the Man High!” (a meaningless title, by the way… Wadic is never threatened with hanging) was published in the November 1949 issue of Fifteen Western Tales, has never, to my knowledge, been reprinted.
Posted by Steve Scott at 2:00 AM