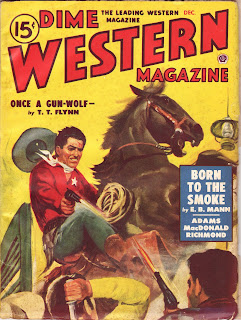 John D MacDonald wrote over 250 short stories and novellas that were published in pulp magazines, from 1946 to 1953, and depending on one’s definition of what a pulp is/was, that number is even higher. As his devoted readers no doubt know, he wrote primarily for the Detective/Mystery magazines of the time, but but also for Science Fiction pulps and Sports pulps. In fact, between those two genres he had over 80 stories published, which is a good percentage of his total output. He never wrote for the Love pulps, or Railroad pulps, and his contribution to the Hero pulps were limited to the shorter tales included with the big Doc Savage or Shadow novels that were the feature of each of those magazines. He did try his hand at horror, with two stories that appeared in Weird Tales, and he did three westerns that were published in three separate pulps: "The Corpse Rides at Dawn," in Ten-Story Western (April 1948), "Hang the Man High!" in 15 Western Tales (November 1949) and "Nine Coffins for Rocking H" in Dime Western Magazine (December 1949).

A few years ago I wrote about “The Corpse Rides at Dawn” and was fairly dismissive of it. MacDonald’s excellent characterization and sense of place was marred by a bad guy with an outlandish weakness, and the story itself contained far too many coincidences to be the least bit believable. I concluded that perhaps the Western was not a field that MacDonald had much aptitude for and may have been a reason for his limited use of the setting. Well, I recently acquired a copy of the December 1949 issue of Dime Western, read “Nine Coffins for Rocking H” and was pleasantly surprised. Given the limitations of the meleu it’s an excellent story with believable characters and motivation, good narrative sense and construction, and a dead-on creation of a time and place. In other words, a western that can stand up with the works of writers who did this on a regular basis.

The setting is in the vast, open area of what is now considered the midwest, near the fictional small town of Garnet. We could be in Nebraska, Kansas or another state west of the Mississippi. It's sometime after the Civil War and certainly after 1862 when the Homestead Act was signed into law, as a central plot point depends on it. The area is surrounded by homesteaders, eager to start new lives on their own lands, and do all of the things required by the Act: build a house, dig a well, put up some fencing and farm at least 20 of your 160 acres. And after living there for five years, the land was theirs. Some raised cattle, some were grain farmers, others raised horses, but all were honest, hardworking men and women who were trying to better themselves on their own small plot of earth.

Of course, not everyone was a homesteader. Some lands, purchased outright, were big operations with big money and bigger ambitions, and the homesteaders were limiting their growth by occupying “free” land that the operations wanted. One such business was the Rocking H ranch, run by a wouldbe cattle baron named Thomas Haggar, a ruthless and half-mad rancher who has been acquiring surrounding homesteads any way he could. His most common method was intimidation and violence: burning homes, poisoning cattle and horses, wearing the homesteaders down to ruin until they gave up their claim and left. Then, he had one of his straw men acquire the claim and prove it out until he could buy it outright for a small percentage of what it was worth.

The story opens as a group of harassed homesteaders are riding in the dead of night to pay a visit to the Rocking H. They are led by an old man named Anse Forrester, whose son died in his burning barn, set by one of Haggar’s men. His fourteen year old grandson Johnny is among the men, as is Nick Lees, who is himself not a homesteader but a small scale cattle rancher who has nonetheless suffered at the hands of Haggar when his house was burned to the ground. Lees has joined because he believes Forrester wants to “talk” to Haggar, although I’m not sure how sneaking up on a ranch house in the dead of night could have fooled him. Of course Forrester is out for vengeance, and when he spies a silhouette behind a window shade, he raises his rifle and fires. It’s a trap, and Forrester is shot dead, as are seven other members of the party. Nick manages to find a way out, and along with Johnny (who has been watching the horses), manages to make it back to the local schoolhouse.

They are met there by the grandson’s older sister Sal Forrester, who upon learning that her grandfather is dead, has some harsh words for Nick Lees.

She said coolly, "I'm sure we have you to thank for this disaster, Mr. Lees. We are not a violent people. This night attack was not our way of doing things. I'm not quite sure which side you may be on, Mr. Lees. As we have nothing more to lose, I'm sure we don't interest you further... Good night, Mr. Lees, We'll take care of the necessary details... Johnny and I will leave as soon as the burial is over."

When Nick returns to his own ranch he learns from his solitary hand Bob Furnell that several of his cattle have been poisoned. After ruminating together about the situation, Lees gets philosophical.

Lees: "Here I am thirty-one next month. I haven't got the money to go to law and I haven't got the guns to fight 'em off. Tonight maybe I killed two or three people. Haven't shot at anybody since I was twenty, and then I only drilled the fella in the leg. I can cash in a little on the beef, sell off the saddle stock and find me a new place and start all over. Or I can stay here until I'm so broke I have to go work for somebody.”

Furnell: "You want me to tell you what to do?

Furnell: "Then you better fold up and ride on out. Takes a mad man to scare off the wolves."

When Furnell rides off Lees has an introspective moment, which broadcasts the story’s turning point.

He tried to feel anger, could feel nothing but the helpless resignation of a fair and honest man confronted with top-heavy odds and complete ruthlessness. He had worked hard, had saved money as a top-hand, had carefully picked his spread. Now nothing on earth could keep him from losing it.

The next day Lees heads into Garnet and walks into the local saloon. There he encounters the Rocking H foreman, getting drunk with four other hands. Not being suspected of being a member of the raiding party, Lees learns the body count from the night before, but before he can find out more, in storms young Johnny Forrester, brandishing a pistol and demanding to know where Haggar is. In his anger and frustration he draws on the foreman and things end badly… 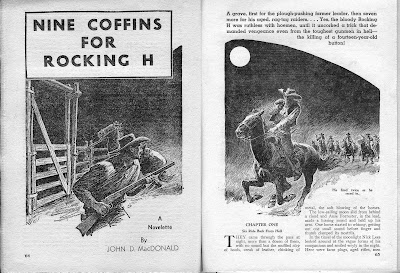 The story is only half over at this point, and the remainder is exciting and suspenseful, if a bit predictable (but most pulp is anyway). The happy ending is nicely tempered by doubt and it comes across as believable and entirely adult. All in all, a well-done, entertaining novella that takes place in a world MacDonald rarely ever visited. And, a near as I can tell, this is the very last time he ever came here.

“Nine Coffins for Rocking H” does not seem to have ever been reprinted.
Posted by Steve Scott at 1:00 AM