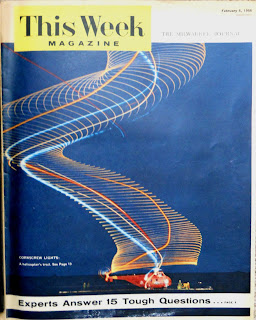 In last week’s posting I discussed the broad variety of pulp magazines that John D MacDonald had stories published in, from mystery to science fiction, adventure to straight fiction, and even westerns and horror. But he never wrote a story for a love pulp, and for good reason, I think. It’s hard to imagine a more unsentimental writer than MacDonald, although even that opinion is belied by digging deeper into the author’s short works. He made many forays into the world of love, usually love gone wrong and its subsequent repair (see “The Cardboard Star,” “Forever Yours” or “What About Alice?”), other times it was love lost and the lifelong regret that loss produced (“The Bear Trap”) and occasionally he did write a straight-up love story like “The Magic Valentines.”

It appeared in the February 5, 1956 issue of This Week, the Sunday morning newspaper supplement that hosted many of MacDonald’s attempts at mainstream fiction. He began his long association with the magazine in 1950 with a run of family situation comedy tales and began penning more serious works as time went on. By the time “The Magic Valentines” appeared he had already written a mystery, a cautionary tale about anger and a family drama about teenage marriage, and he would go on to write about murder, assassins and even an extra-marital affair. “The Magic Valentines” is straightforward, tame and entirely adult in its sensibilities, and it fairly well avoids coming too close to being saccharine, although just. Its real strength, however, is in the cold, lonely world its protagonist inhabits, an atmosphere MacDonald establishes in his customary few words, and it is done so effortlessly that one is instantly drawn into the narrative.

Jerry Bowen works in the claims department of a large insurance company located in a tall skyscraper in downtown Manhattan. It’s the end of another dreary day and he has worked late to finish a report. Heading for the elevator he ruminates on his nebulous plans for the evening.

He looked toward the evening with distaste. Two years ago the town had seemed wonderfully exciting. Now he knew of at least three apartments where friends maintained seemingly permanent parties, where he would be welcome, but he did not want another of those evenings of predictable girls, predictable small talk, and the mild, highly predictable hangover. This was perhaps a night to hole up, eat a quick meal and read a book. But that seemed equally tasteless. He hoped it wouldn't be another of those restless evenings of walking too many miles through the bright, meaningless streets.

Before boarding the elevator he passes the typing pool and sees a lone female figure silhouetted against the city glow, quietly weeping. He approaches and discovers it’s Della Howard, the lovely girlfriend of Walter Crane, a “rather somber young man” who works in the Actuarial Section. Della and Walter have obviously had a falling out of some sort, and Jerry commiserates and bravely asks her to dinner. She agrees, but only if they go Dutch. They have a wonderful time -- at least Jerry thinks so -- and he asks if they can do it again sometime. Della looks him directly in the eye and says emphatically, “I’d like to, Jerry.”

There was a date, and more dates. Sometimes Jerry would see Walter Crane in the corridor. Crane would look at him with loathing. Jerry sensed the tenor of the office gossip. It did not bother him. Here at last, maybe, was The Girl. The end of long restlessness. The end of a search. Every hour with her was too short. He could not tire of watching the curve of her lips, the shape of her hands, of hearing the sound of her voice... The flavor of their first meeting continued. No kisses, no hand holding, no declarations of love undying . It somehow seemed better that way, more valid and more precious.

But Jerry can sense a distance between them, a strain on the part of Della as she continues to try and get over Walter Crane. Then, on one especially wonderful evening, he kisses her, but he feels her emotional withdrawal and concludes “It was not the magic he had expected.” Later over dinner he raises the subject of the first kiss with faux humor and is surprised by Della’s reaction.

She looked seriously at him. "What's bothering you? Is that a crazy kind of apology for kissing me? I'm astonished you didn't a long time ago. I expected you to. And I expect you to kiss me again. Quite often, darling.”

But as Jerry looks into her eyes he realizes it is all an act, Della playing the part of spurned lover with “little girl earnestness.” When he walks her home he kisses her again, for the final time… 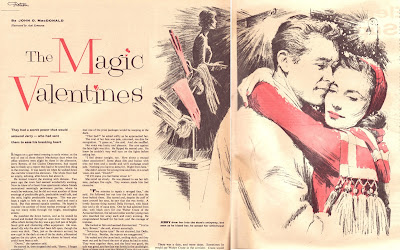 MacDonald’s original title for “The Magic Valentines” was “The Fourteenth of February,” and the story appeared in the issue of This Week one week prior to Valentine’s Day, so it is likely that this work was commissioned by the magazine for the holiday. That would certainly explain a story so out of the ordinary for MacDonald, who was rarely this florid in his handling of romance, even in his early days. There are echoes of another JDM protagonist looking for love and marriage, Clint Sewell from You Live Once, a novel that was published only a month after “The Magic Valentines” appeared. And the story as well as the protagonist and the setting ring of another famous lovelorn male in a very similar situation. C.C. Baxter in Billy Wilder’s 1960 film The Apartment, is a single, lonely male working in a huge, soulless insurance office in Manhattan, and he falls in love with girl who is seeing another member of the staff. The two stories take very different tacks, but the feeling of loneliness and unrequited longing are the same. I doubt if Wilder was copying anything in “The Magic Valentines,” though.

MacDonald’s assertion that he never wrote for the love pulps is a true one, at least if the surviving records are to be believed. As Lee Server wrote in his 1993 history Danger is My Business, love pulps were “the only rough-paper category aimed specifically at women,” and they were hugely popular in their day. Every publishing house had a line of love (or romance) titles. Babette Rosemond, an early JDM champion who was editor of both Doc Savage and The Shadow at the time MacDonald was trying to break into the fiction trade, began her pulp career as an editor of love pulps. (Her first novel, The Dewy Dewy Eyes, is a fictional account of her early career.) But when the love pulps died, they died, and their lack of legacy is almost as great as the popularity they once enjoyed. As Server put it:

Although they were enormously popular in their day, when the love pulps eventually disappeared, they left behind no trace of their existence. No great writers or continuing series characters were born in their pages, and it appears likely that no pulp romance story has ever been reprinted anywhere.

One of the most interesting things about the publication of “The Magic Valentines” is not in the story itself, as different as it is, but in the very brief author bio which accompanies it. It states that MacDonald was currently working on a forthcoming book, a “serious historical novel, set in Ceylon,” which was supposed to come out later that year. Of course, no such novel ever appeared and there is no direct reference to it in the Finding Guide to MacDonald’s papers. It joins a short but intriguing list of JDM novels that never were, or that were rejected and mothballed: The Golden Edge, The Blood Game (presumably a novel about the game of golf), the “big book about banking”  that MacDonald spent years on, A Matter of Trust (which may in fact be that banking book), and others (including two Deep Blue Good-By false starts). 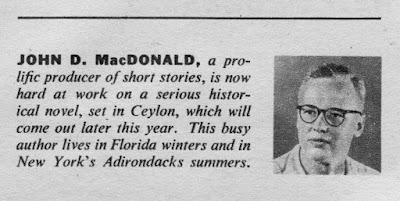 “The Magic Valentines” has never been reprinted, but is accessible, like all of MacDonald’s This Week stories, through many newspaper archives throughout the country, assuming that the newspaper in question carried This Week. Many public library systems have access to their local newspapers and card holders can usually access these databases for free (and download images of pages). Or one could buy a membership to Pro Quest, which has many different newspaper archives available.
Posted by Steve Scott at 1:00 AM