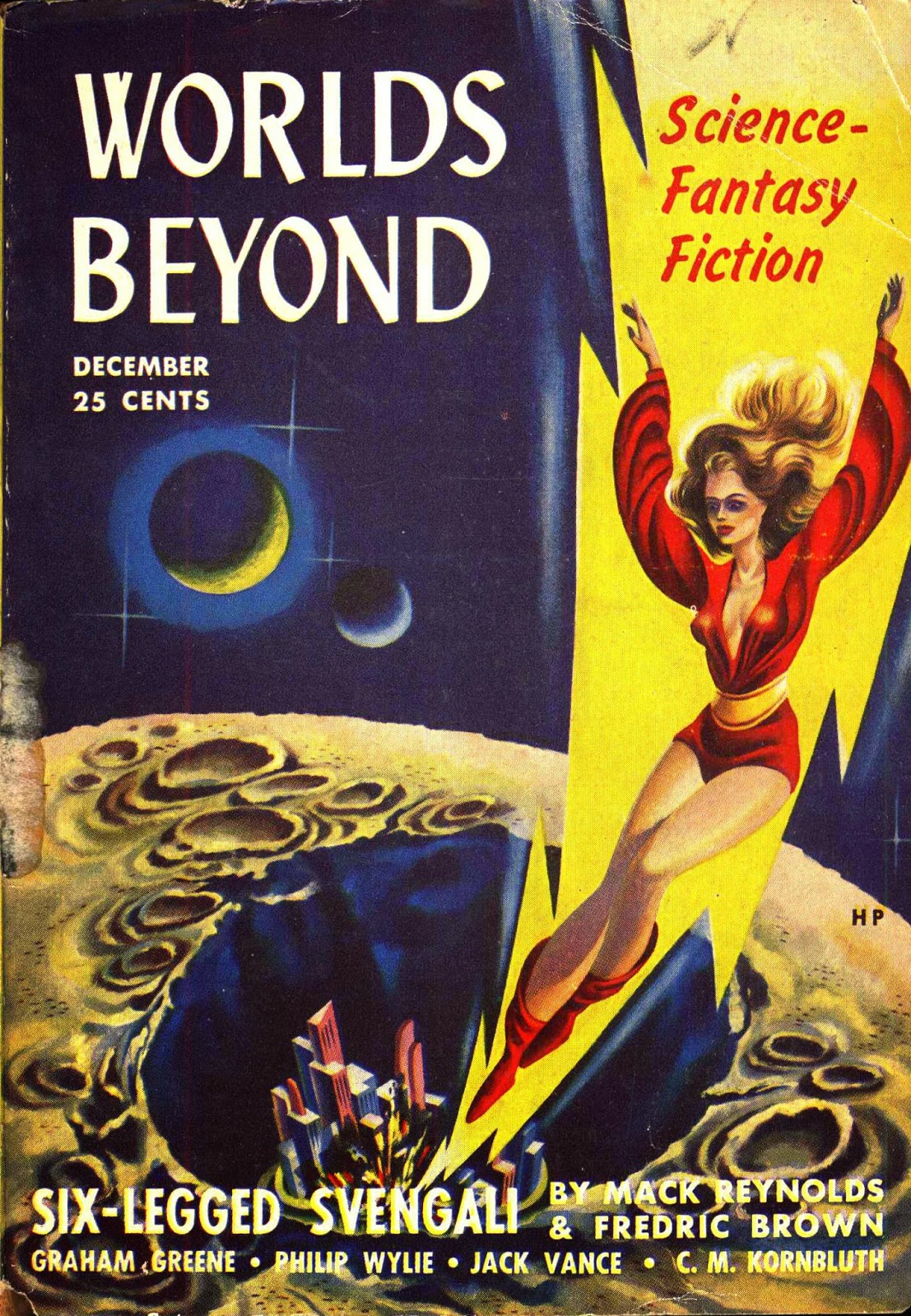 Worlds Beyond was a monthly science fiction digest that began life in the relatively late year of 1950. Published by Hillman Periodicals and edited by the inestimable Damon Knight -- late from his stint as assistant editor of Super Science Stories -- the magazine made its debut in December with an issue that contained both new and reprinted stories. Knight's mission statement appeared on the inside of the back cover, where he proclaimed a different kind of sf: Science Fantasy Fiction.


... [it's] a blend of two forms of imaginative writing: science fiction and fantasy. Fantasy is as old as recorded history; science-fiction is a child of the industrial revolution.

For years these two branches of the field have been considered as separate, but the old standards no longer apply: a fusion has taken place. The "pure" science-fiction story is almost nonexistent; it has acquired the flavor and the freedom of fantasy. "Pure"fantasy is equally doomed by the new attitudes and knowledge that science has introduced; but at the same time the principles of science-fiction writing have give it new life.

The hybrid... is as strongly alive as any form of modern fiction. It's our aim to do everything possible to strengthen it further and to aid its growth.

You won't find "wiring-diagram" science-fiction stories here, or Gothic horror-fantasy either. But the whole field in between is our meat -- and, we hope, yours, too.


John D MacDonald has a story in the debut issue of Worlds Beyond, his only appearance in the magazine. “The Big Contest” appeared alongside reprints by luminaries like Philip Wylie, Graham Greene and Franz Kafka, along with other authors not noted for their sf or fantasy work. It also featured the first short story by Larry Shaw, a writer who went on to edit the magazine Infinity Science Fiction. MacDonald’s story is the perfect example of Knight’s Science Fantasy Fiction, a genre that really wasn’t really new and that blossomed in the national consciousness with the popular television show The Twilight Zone. “The Big Contest” feels like it could have been written for the Serling series, even though it arrived on the scene almost a decade earlier. Or, more accurately, it reads like a Ray Bradbury story from Dark Carnival (The October Country for you young folk.)


The setting is certainly Bradburyesque, a small Midwestern town on a bucolic summer evening. 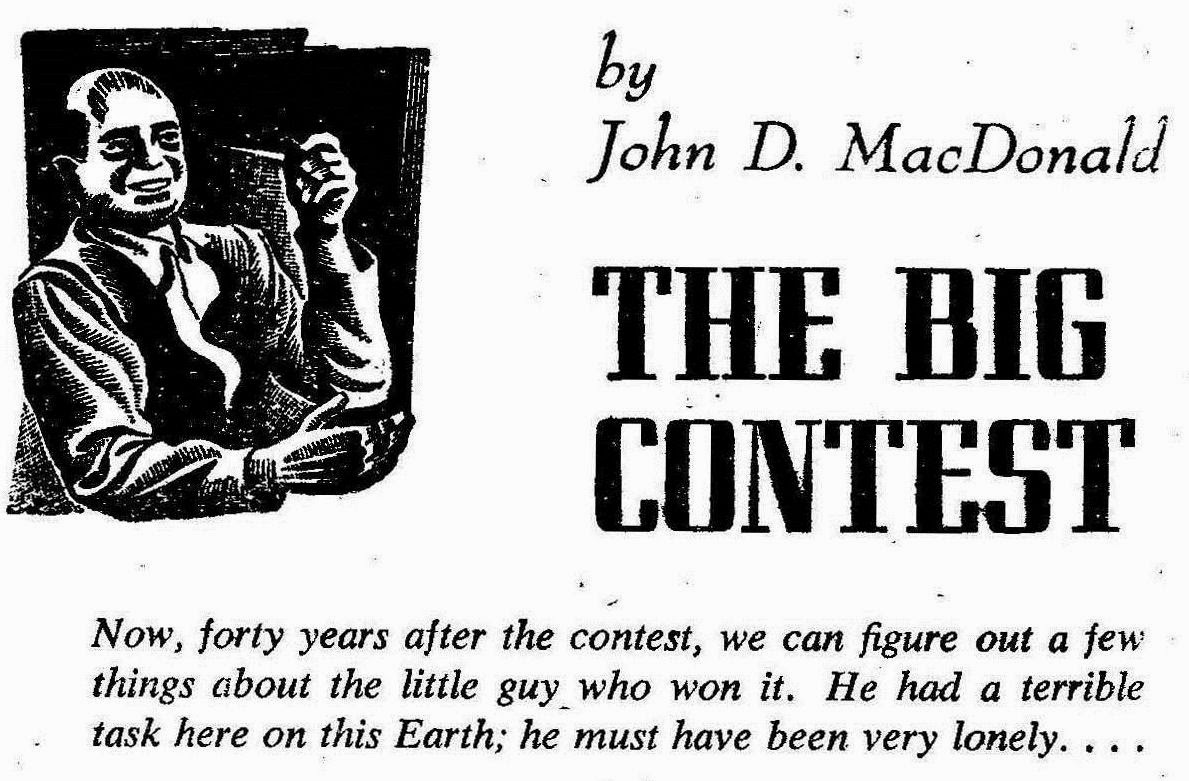 There was a blueness in the sharp-edged shadow cast by the Fire House, a blueness that hinted of dusk. There had been a piece in the Cardon Gazette about the man over in Chamber County who claimed to have seen a flying saucer. Through the heat of the long Saturday afternoon the front of the Fire House had been the focal point for the saucer discussion. Men came and went all afternoon and the talk at times grew as hot as the sun against the pavement and store front across the way.

As the day wears on and participants come and go, dusk begins to settle and the group is down to five men and a boy. Hobe Traik, one of the old timers, has been uncharacteristically quiet throughout this Saturday discussion, leaning back in his kitchen chair, “his belly resting comfortably against his beer-keg thighs, his store teeth clamped into the deep grooves of the pipestem, a mist of sweat gleaming on his bald head.” But when he does finally speak he commands attention as he recalls a Saturday from the distant past that began right in front of the same Fire House.


"Now I've heard a lot of fool talk today about these here saucers. Might be I'm a little tired of it. Me, I've been a-waitin' on them for just about forty years. Ever since Woolmutt left town..."


The year was 1911 and Traik was just a “sprout… full of sass.” It was a hot and very dry summer and the yellow dust of the unpaved streets just sat there on that windless day as Traik and his boyhood companions lolled about. One of them spat and they watched as it hit the dust and rolled. Another boy did the same and it rolled farther. “First thing you know we got us a line drawed and rules made and we're takin' turns.”


The spitting contest became a summer ritual, and it drew contestants from as far away as “Dunstan,” everyone vying to beat the two best spitters of Cardon, Fred Tunnison and Luke Amery. One day a young man named Woolmutt shows up, first to watch and eventually to compete. “One of those fellas, he was, you don't think once about. You don't see him come and you don't notice him leave. Little chunky fella with washed-out eyes, sort of a stupid look, and a big mouth.”


Woolmutt is shy about entering and elects to go last in the bout he eventually competes in. And of course, his spitting is nothing like rolling dust along a dry small town street.


"First thing I see, he sticks his tongue out. Now I tell you, boys, that was the biggest tongue I ever did see on anybody. He sticks it straight out, flat like, and then he curls it up from the sides to make a sort of tube. That tube is a good four inches out beyond the end of his stubby little nose. I see him take a breath. Big chest on the little fella... He goes whih-THOO! And something goes bang across the street..."


There’s a hole in the plate glass front of Winkelhauer's Merchandise Mart. The crowd roars, and some are suspicious. He is checked to make sure there is no foreign object in his mouth, and when none is found, a second round commences. This time Woolmutt hits the wall just below the store window. The third and final round ends with Woolmutt hitting one of the pine blocks used to mark the contestants’ places in the dust, sending it reeling across the street.


The celebration of Woolmutt's amazing talent eventually involves alcohol and he is taken through the streets of Cardon displaying his accuracy and distance, hitting cats, horses and -- almost -- the backside of a lovely young eighteen year old. But a member of the crowd has not imbibed and seems to take more interest in Woolmutt himself than the results of his powerful expectorations. John Chase is on a break from the hospital where he in interning, and he sees something in young Woolmutt that the other’s haven’t noticed…


“The Big Contest” is run-of-the-mill John D MacDonald and run-of-the-mill JDM science fiction, a fairly predictable tale with a surprise ending that will surprise no one, and a style that proves that MacDonald was no Ray Bradbury. The homespun dialogue comes off as overly arch and his evocation of a rose-colored past is told with none of the poetry that Bradbury did effortlessly. MacDonald was the master of a different kind of poetic prose, one that expressed itself in what it didn’t say, in brief sentences and dialogue that allowed the reader’s imagination to take over and fill the void. Of course I have no idea if MacDonald was channeling Bradbury in this story, but he certainly was a fan of the writer, even going so far as to have his first-person character in Dead Low Tide make a direct reference to him. 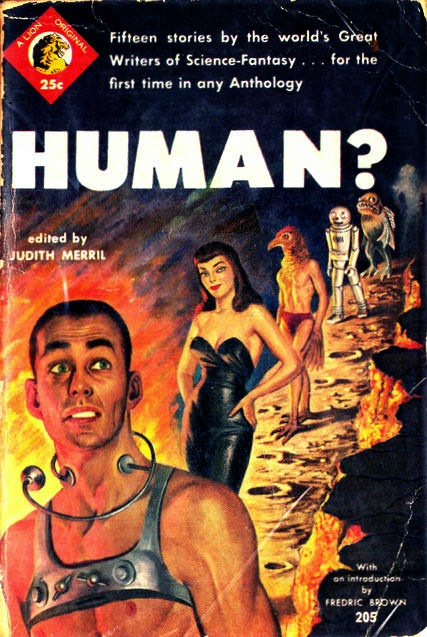 Judith Merril liked “The Big Contest,” however, and included it in one of her early anthologies, Human? in 1954.


Several of the authors featured in this first issue of Worlds Beyond got brief biographies on the inside of the front cover, MacDonald included. (Except for the back cover there was no advertising in the magazine.) It is fairly typical of the bio he supplied all of the magazines who requested one during this period.


John D MacDonald, tall, bifocaled, 34, lives winters in Clearwater, Fla,. summers at Piseco Lake, N.Y., with wife and boy, 11. His background of Harvard Graduate School of Business Administration and the wartime O.S.S. has not contributed much to the whodunits, science-fiction and adventure yarns which have enabled him to keep eating since 1946. He can't save money, lay off smoking or stop falling hair. He has a detective novel soon to be published.


That novel was his first, The Brass Cupcake, which had already hit the stands in October.


The magazine itself was not so lucky. According to Michael Ashley in his 2005 study of science fiction magazines in the middle part of the last century (Transformations: The Story of the Science-Fiction Magazines from 1950 to 1970), Worlds Beyond was a victim of its publisher’s “fickleness”. Ten days after the first issue was published Hillman Periodicals decided to kill the title, and although Knight had prepared two subsequent issues and those issues were published, they “received hardly any backing or distribution.” Ashley concludes that “...There is no doubt that had Knight been allowed to continue he would have had much to contribute to the development of science fiction in the early fifties. The saving grace is that he became one of the best writers and critics of sf during the fifties and returned to editing, with considerable effect, in the sixties.”


“The Big Contest” also appears in MacDonald’s own science fiction anthology, Other Times, Other Worlds, which is out of print and still not available as an eBook. Write your congressman!

Labels: Other Times Other Worlds, Science Fiction, Worlds Beyond