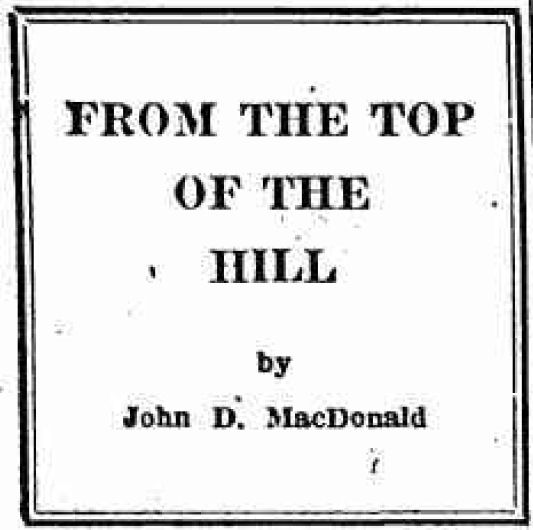 When John D MacDonald began his writing career in October of 1945 he embarked on a marathon stay in front of the typewriter, working in a converted closet of a small, second story apartment in Utica, New York. He wrote 80 hours a week and produced 800,000 words of prose, most all of it rejected by the magazines of the day. Eventually, with the exception of two stories that were published without pay in a marginal periodical, his first real sale happened in February of the following year. It was also at this time that the MacDonald family -- John, Dorothy and eight year old Johnny -- made their first trip south for a brief stay in Florida. It was John’s first ever visit to the Sunshine State.


Back in New York and fearful of running out of money John took a day job with the Taxpayer’s Research Bureau, a decision he came to regret as his stories began to sell in greater quantity. As an excuse to quit he claimed that Dorothy’s health could not withstand another upstate winter and he needed to take her south. He quit the job and the family got in the car with a trailer in tow and headed for Taos, New Mexico. Although he’s never explained why Taos was the family’s destination, it was probably because of the location of the Taos art colony there. With both adult members of the family now expressing themselves artistically, it would only seem logical for them to commune with other artists. This same rationale led them to eventually move to a college town outside of Utica, then to the artists' community in Cuernavaca, Mexico, then ultimately to Sarasota.


They never made it to Taos. They got as far as Ingram, Texas, located in the hill country northwest of San Antonio, fell in love with the surroundings and rented a cheap, off-season cabin on a hillside. They stayed there the winter and early spring before returning to New York. There is relatively little written about the family’s stay in Ingram. In The House Guests MacDonald himself gives the place all of one sentence, and both Merrill and Hirshberg are both just as brief. But in December of 1947 MacDonald wrote a more detailed account, in his weekly Clinton Courier column titled From the Top of the Hill. It appeared in the December 4 issue of the paper.


Last winter we followed the sun to Texas. It was in the nature of a gamble, because the typewriter we took along had to bang out enough saleable wordage to get us back. We were looking for a place that wasn't expensive. Believe it or not, we found such a place and we herewith recommend it to all who wince at the thought of Florida tariffs.


Go to the Hill Country, seventy miles northwest of San Antonio. It is a resort section used by the people from the Gulf cities when the summer heat down there becomes unbearable. During the winter it is pretty quiet and thus accommodations that, during the summer months, rent for two and three hundred a month can be obtained for fifty and sixty. And it is almost as warm as Florida.


We stayed at a place called Bon Aire Lodge six miles from Ingram, Texas, "the only all rock town in the U.S.." They stamp that on outgoing letters. Bon Aire Lodge isn't a lodge. The proprietor purchased the mess hall from a P.W. camp, cut it into pieces and sprinkled the pieces around on a rocky hill. He paneled the inside in Mexican pine and had local stone masons rock the outside.


We rented a cabin that had yet to be rocked. After we were there a week, a truck dropped great slabs of white and brown stone beside the cabin. A few days later some lean and dusty men showed up with chipping hammers and went to work. During the chill of early morning we furnished the coffee.


The men talked to each other in a very normal fashion. "Mistuh Lee, would you kindly hand me that rock?' They has worked together for years and it was still on a mistuh basis.


They sang while they worked. It was a song we'd never heard before. No words to it. A mournful chant, plaintive and haunting.


We were sorry when the cabin was all rocked and they moved on.


This summer, as the FM tower diagonally across the street from us was being built, we were walking near it. Suddenly he heard that same song. We found out the next day that the steelworkers who put up the tower came from Texas.


Last night we looked at the red lights blinking on the tower and thought of that plaintive song. We thought of the live oaks, the hillside goats, the Guadalupe River. We remembered sitting out in the sun in a swim suit while we hacked at the typewriter during February, March and April. We remembered the big-hatted, slow-talking men gathering, with their weathered-looking women at the stone schoolhouse during the evening to play dominoes.


If you get tired of ice and want to head down in that direction, let us know. We'll tell you whom to write to. That is, if you don't mind being envied.


The MacDonalds had planned to stay a bit longer but were forced to return home when Dorothy’s mother Rita became ill. The family’s trip home is briefly recounted in The House Guests:


We still had our little green prewar Ford convertible with huge mileage on it. We were towing a jeep trailer, an army surplus purchase. At anything over thirty-five miles an hour, the car gobbled both gas and oil. There had been a temporary lull in sales, and we were down to a hundred dollars and no credit cards. I estimated that if we kept it at thirty-five, and stayed on the road fourteen hours a day, and were circumspect about food and lodgings, we could make it in good season on the cash in hand. We arrived with a little less than ten dollars to find two substantial checks waiting [and] Rita on the mend…


Merrill writes that MacDonald produced only fifteen stories during the stay in Texas, and indeed when one looks at his chronological listing of published works it can be seen that there is a definite falloff in magazine appearances during this period, if not production. Assuming a one month lag, there were only two stories published in March, one in April, two in May and two in June. One of those stories was “The Pay Off,” sold to Cosmopolitan, only his second sale to a “slick” and probably the source of one of his “substantial” checks awaiting him in Utica.


The Bon Air Lodge was sold in 1951 and continued to operate for awhile before disappearing into history. The MacDonalds don’t seem to have ever returned there. 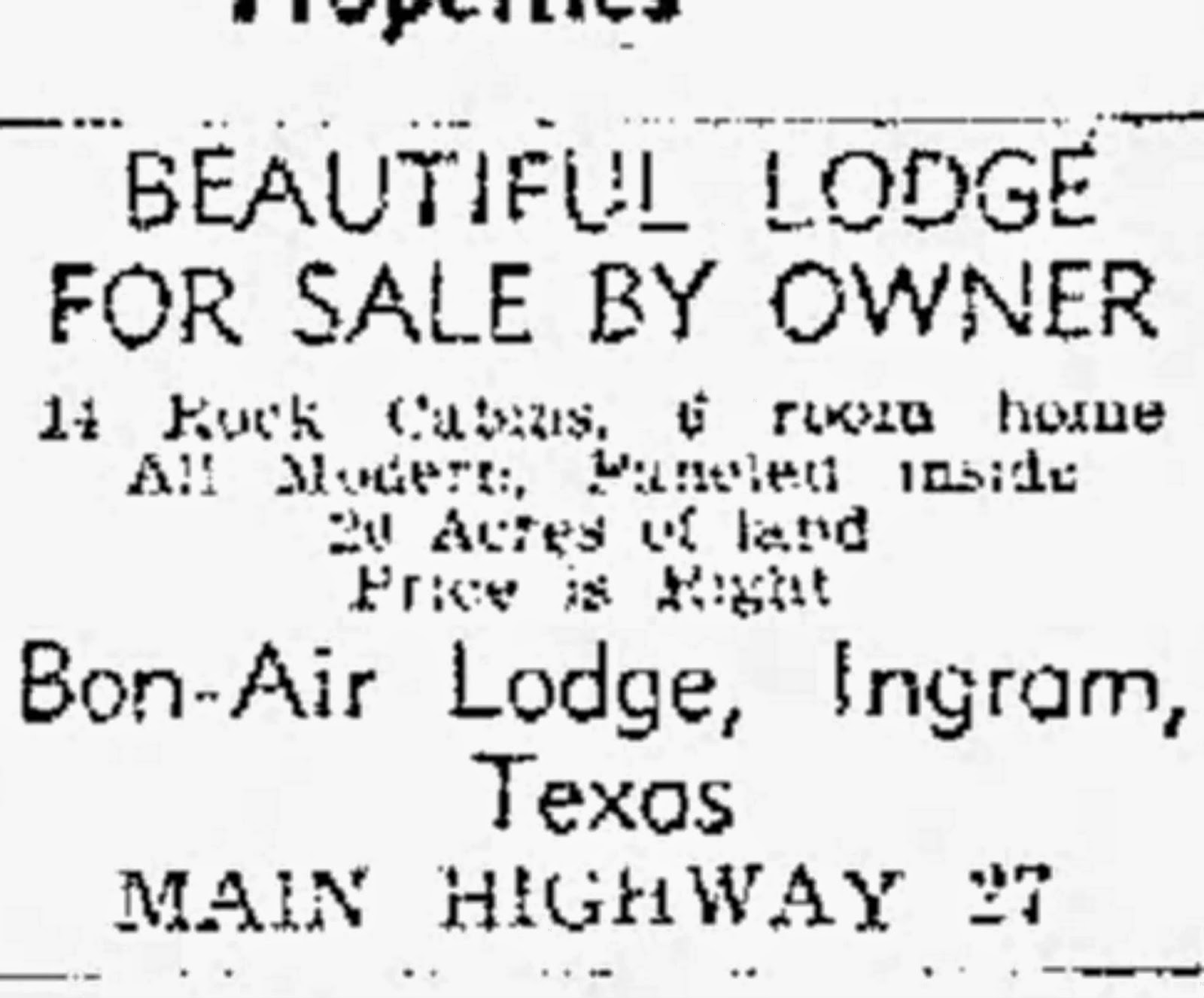 Labels: From the Top of the Hill, Quotes from Non-Fiction