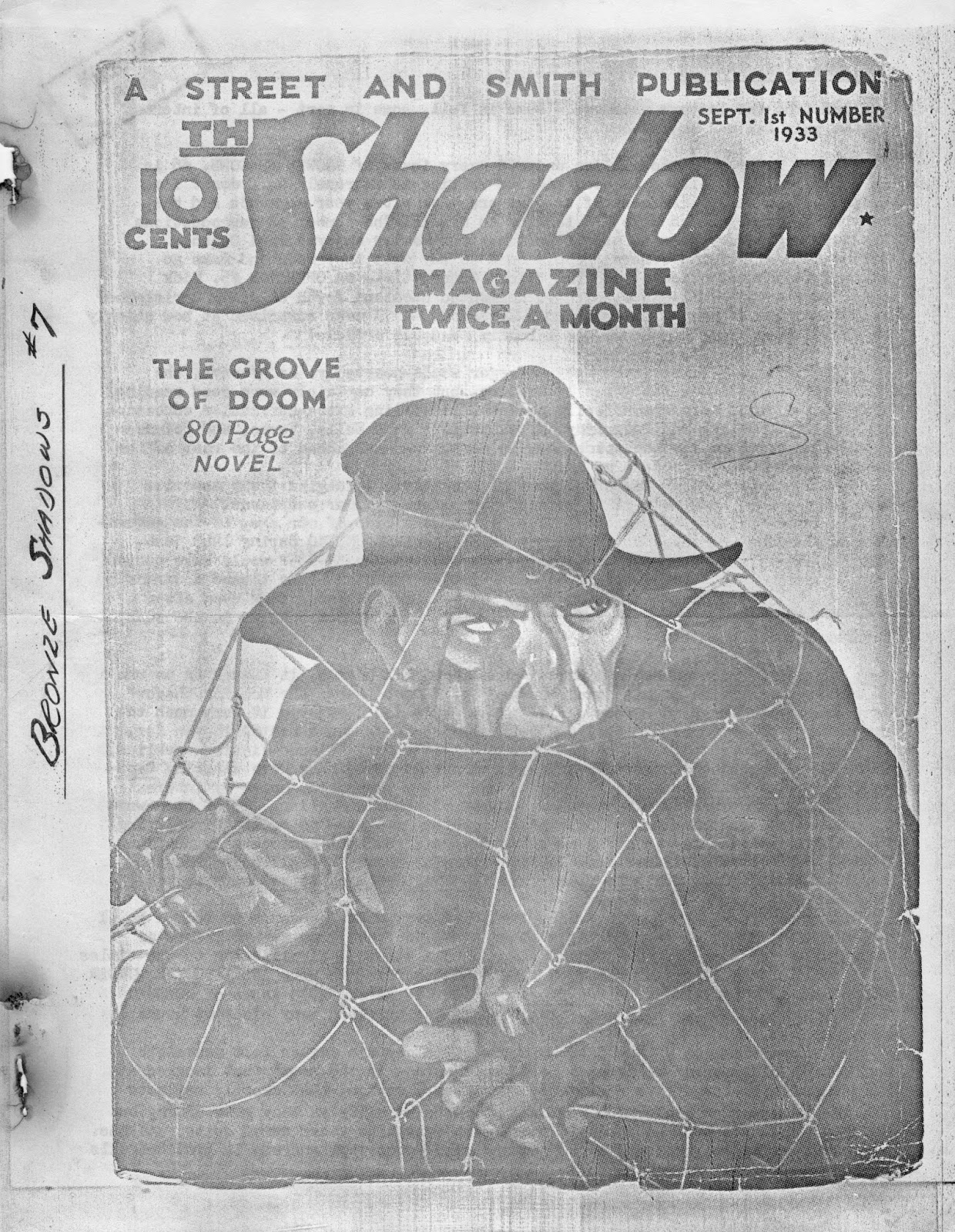 The following is a letter John D MacDonald wrote in 1966 to the editor of a fanzine titled Bronze Shadows. Like most of its ilk, Bronze Shadows was a homemade affair, typed and printed via mimeograph and mailed out to subscribers lucky enough to have heard of it. In this case it was the handiwork of one Fred S Cook of Grand Haven, Michigan; he wrote, edited, typed, printed and mailed each issue of the ‘zine, at the cost of a whopping 35-cents per issue, or three issues for a dollar. Bronze Shadows’ particular subjects were the pulp fiction magazines Doc Savage and The Shadow, whose runs ended in 1949. How MacDonald came to know of the fanzine is uncertain, but he contributed a lengthy letter in late 1965 that was published in the third issue under the title “John D MacDonald vs. Doc Savage.” It was an extended reminiscence of his early days writing for these two pulps and his relationship with their then-editor Babette Rosmond. (Boy, what I would give to have a copy of that issue!) He followed that letter with this one, where he responds to readers’ reactions to the initial piece and gives further background. Like the previous letter, it was published under a title, in this case “Pulp Perspective Plus.”


This 1966 MacDonald is still intolerant of leaden, dreary, shadowless prose whether it be in the vintage Doc Savage, or in contemporary Leon Uris and Taylor Caldwell novels.


I am more tolerant of the hilariously dull writing in vintage pulps than in the pretentious contemporary Michenerized journalistic novel because the old pulps have the kind of neo-camp charm of fringed lamp shades, Olsen and Johnson, wind-up phonographs, Charlie Chan movies, steamer trunks and rumble seats. Long ago, my boyhood stamp collection disappeared. Were I to find it, there would be a sweet and forlorn nostalgia in finding the spurious South African triangle traded to me by Kenny Somebody in return for a few dozen equally worthless mint issues printed in Germany during the galloping inflation after the first world war.


Nostalgia has value, even when the stimuli have none.


I believe that the standards of literary criticism must be applied to all writing, and that it is a kind of snobbism to apply it to so-called “serious” writing, and declare the pulps exempt because “they were trying to write readable adventure stories for the masses.”


So were dozens of super-melodramatic writers who fed serial installments to the newspapers in the middle years of the last century. It would take exhaustive research to find out who most of these hard-working fellows were. But at the time, until his popularity became so evident they had to notice it, they thought Charles Dickens just another one of the boys, chugging through the same vineyards.


Without shame, and with only a shy scuff of the foot, I proclaim that never once did I ever sit at one of these machines and think, “I am writing a pulp story.” Just as it is of no moment to me whether a novel is going to be published in boards, alligator hide or Kleenex. I have always said, “I am writing a story. I am trying to tell it true.”


And thus, wherever my work has been published, I am accepting the certain risk of literary standards of criticism being applied to my work. I would not want it otherwise. But I believe that I am not kidding myself when I say that I am only peripherally interested in any sort of critique. I am trying to please a critic who sits in a little room in the back of my head and sneers at nearly everything I do. I make him nod happily about once a year -- and that is a very good day. I was trying just as desperately to gain his approval when I was writing for the pulp magazines.


Writing “for” them is not correct. I was writing stories. I was trying to make magic and mysteries. When they were done I would try to be sufficiently objective to guess where they might end up, if anyone ever bought them. Stories that I thought might be published in pulp magazines during the years 1947 thru 1951 often ended up being published in Collier’s, Liberty, American, Esquire, etc.


I really think it would be a lousy situation if a man could write stories, hence exposing himself in intimate ways in the marketplace, and be immune to any form of artistic appraisal.


Naturally 99% of the stories throughout the pulp era had about the same artistic validity as contemporary television slop. But any devotee can name some names from the pulps which have a fairly classy resonance today.


During the heyday of the pulps, remember that 98% of the fiction in the lady-books was dreary meretricious crud. And probably 97% of the novels published, and 97% of the terribly, terribly sensitive bits in the litry reviews and journals have been mercifully forgotten as has most of the pulp product.


There just ain’t very much that’s any good in any medium at any time. And there is just as good a chance that there is some lasting gold in them there hills of pulp as in the mountains of other kinds of publications.


I merely say that the Man Of Bronze won’t qualify on those terms.


That does not mean I want to knock nostalgia.


Anyway, for the archive-minded, following is what I think are complete records on Street and Smith’s publications of my stories, in Doc Savage and The Shadow. Total 34 stories. I am missing the information on the dates of publication, editor’s title, and whether or not my name was used on two of these. If any of your brethren can fill in these two blanks, or find any others which my records do not cover, I would be most grateful. The five pseudonyms indicated herein cover every name my work has appeared under, in both Street and Smith magazines and elsewhere.


Here MacDonald lists the known stories and then gives details on the two he is uncertain of, including his original title, history, opening paragraph and synopsis. Both were subsequently identified. He goes on:


For the statisticians, the foregoing represents a smidgen over 300,000 words, or just about $6,000 at a time when (1946-1947) I was selling not quite one out of every three I wrote. So call it a million words of manuscript, plus another half million words discarded in the process of getting the million and a half worth mailed out, and you come down to an effective word rate of 4/10th of one cent per word. Thus 8,000 words a day, or about 5,500 of mailable mss meant on the average $32.00. So if you had the health, mule-headedness, emotional support and artistic conviction to bang out two million words a year, and if you never put your tongue in your cheek or patronized your imaginary audience in any way, you could simultaneously make a living and learn the writing business at one and the same time.


But you couldn’t count on a big social life or a small postage bill.