"My chief influences, and I mean I studied them, were Chandler, John D. MacDonald and the man I admire most of the three... Charles Williams. No need to go into Chandler -- he had his faults but just a great, great writer, a writer's writer in many ways and more for unforgettable scenes that all over plotting.

"John D. for narrative drive, for sheer storytelling, for mastery of the craft of the unstoppable, can't-put-it-down novel. And Williams because of the clean, pure, wonderfully honest and undemonstrarive piece of work he turned out again and again. Of the three he has never had his due to my mind though I guess he's done well enough and probably is not complaining.

"I'm not a Travis McGee fan particularly, [I] prefer the early stuff, but John D. has probably taught more writers how to write than anybody. For me he was a revelation. He was studyable. You could read his stuff and learn craft from it. And of course I was influenced by any good writer I liked, it goes without saying. I hardly sprang full blown from Zeus' ear.

"But more than someone to study only, I had met John D. through some mutual friends and it was he who sent me to Knox Burger. This after he had first recommended me to his agent, Max Wilkinson, who wasn't interested, stating as his reason that he felt the private eye genre was a vein that had been thoroughly mined. 'Okay,' says John. 'Max isn't the last word. Send it to Knox Burger at Dell and I'll ask him to look at it.' Knox did and bought it. And mind you, John did this for a relative stranger. Decent, kind wonderful guy. I've heard other stories of his helpfulness too."

-- O.G. Benson, whose only published work is his 1960 hardboiled novel Cain's Woman. From his correspondence with William H. Lyles as published in Paperback Forum, Number 1 (1984). 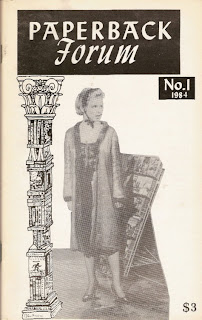