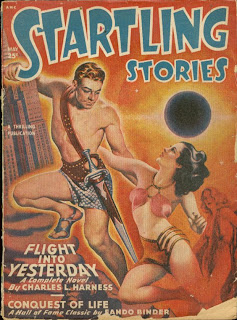 "Immortality" was the fourth of eight stories John D MacDonald had published in the science fiction pulp Startling Stories. Appearing in the May 1949 issue of the magazine this brief 2,000-word tale filled a mere three pages, artwork included. It's an interesting, thought-provoking premise that, as many JDM science fiction stories did, "answered" one of several age-old riddles of man with an s-f answer. Not as ambitious as Ballroom of the Skies (or its antecedent novella "Hand From the Void"), which came up with a reason behind the ageless and endless conflicts of mankind, or Wine of the Dreamers, which sought to answer the reason behind insanity and nearly every other irrational act a human could commit, "Immortality," takes on the much smaller and presumably less-important question of "what causes déjà vu?" The answer, revealed early in the story, is not a hopeful one.

Which is interesting to the student of MacDonald in a strictly parochial sense, since the author's previous Startling Stories entry was "Flaw," a rare --for both him and for early science fiction in general -- pessimistic tale, showing a future that holds an empty promise of progress. The May issue in which "Immortality" appeared contains in its letters section dozens of responses to the previous story, and its reception was decidedly mixed. Since MacDonald rarely, if ever, wrote short stories for specific pulps, I doubt if this back-to-back gloom was anything more than serendipity.

"Immortality" begins with a framing device, set in the here and now and somewhat of a red herring in that the reader is given the full names of two characters who are only there to set up the real story taking place behind the scenes. Stephen Brale and Jane Torin are engaged to be married and are house hunting. Stephen has discovered the perfect home, complete with a "deep, native stone fireplace" and a huge window seat. He can't wait to show it to Jane, who arrives and is forced to shut her eyes before entering. After Stephen has led her inside and allows her to take a look at the beautiful living room, Jane's gasp is the result of more than simply "pleased anticipation."

"Oh, Steve! It's beautiful! But just for a moment, when I first looked at it I had the oddest feeling. It was as though you had brought me in here before and I had opened my eyes and seen this same room."

Steve make playful fun of her and they joke about it.

Double carriage return, next paragraph, and the reader in in a different place and time entirely.

In a subterranean room beneath the "tough vitrified skin of Planet Earth Eighty" sit the Seven, the last remnants of the human race. We are in a future so remote that time can scarcely be measured and the Seven are "incredibly aged" leaders with atrophied muscles and huge, hairless skulls. The glories of the human race, its advancements, its conquering of space and the distant stars is so far back in the past as to be beyond remembering. For at mankind's greatest fulfillment the universe began to die, contracting and decreasing, leaving dead, airless planets and tired, dying suns. (A direct parallel to "Flaw.") The last bits of vegetation on the last habitable planets died a million years ago, and now only the Seven remain, discussing (through telepathy, of course) no less important a subject than the "future" of mankind, such as it is.

"We are Man. We have fought through countless millions of years, migrating to green worlds when old ones perished. There are no more green worlds. Our universe fades and dies. Let this then, be the end. Let us, the last Seven of mankind, perish here, considering the deeds of our race, the worlds made and destroyed, the universe plumbed to the outermost edges of eternal darkness. Let this be the end."

It sounds as if they have a choice in the matter, and indeed they do. With science beyond imagining, they have seen the future and know there is nothing but death. They have also looked into the past and found that it "cannot be changed or altered in the slightest degree." But they have the power, through a huge machine built thousands of years earlier, to reboot time, but in the only way it can be rebooted: repeating history exactly as it has been played out before.

"It is known that we cannot step backward in time as independent entities. To do so would be to disturb the probability stream, leading to the mistaken concept of tangential worlds. On this same basis, an entire planet, or even an entire section of the universe can -- must be returned as a unit, because the whole is the smallest fraction that can be shifted in the time stream without altering in any way the probabilities involved."

The conflict in the story (what little conflict there is) is between different factions of the Seven, those who want to press the button (literally) and those who don't. At that point one of them asks (telepathically, of course) the inevitable question:

Of course they have, for that is the whole point of the story, and when the framing story returns to end the tale, it is as predictable as if we had all lived it before. Perhaps we have! One certainly gets that feeling reading lots of old pulp fiction.

"Maybe science fiction is like the comforting words of a wise parent: "Don't worry, little man. When you bust up this planet, I'll buy you a new one. A nice new green one. Two hundred light years away."

The story, as far as I know, has never been anthologized.