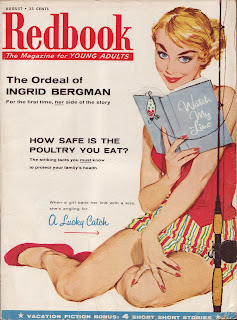 About a month ago I wrote a piece for this blog on John D MacDonald's 1956 novel Murder in the Wind. I mentioned that an abridged version of the book was published in Redbook magazine the same month (August) that the paperback original hit the stands and that it appeared under what was probably MacDonald's original title "Hurricane." At the time I wrote the posting I didn't own a copy of magazine, so I had no way of knowing anything about the story or the way it was abridged. I have since obtained a copy, featuring a lovely cover illustrated by the amazing Lucia Larner, and thought I would share a few things about it.

The glorious 1950's-style illustrations that were part of most mainstream magazines of the time were, unfortunately, absent in the case of "Hurricane." Redbook, like several other magazines of the era, when including a "Book-Length Novel"  relegated that longer fiction to the back pages of the issue. In Redbook's case, the story is printed on a lower grade pulpy paper, unlike the slick stock enjoyed by the rest of the issue. This also meant that the art for the story was limited to what could be printed on that paper, usually little more than two-tone black-and-white, or a few shades of gray. If one was lucky, they got a block of a single color. As one can see from the "Hurricane" illustration below, all MacDonald got in this case was a fairly unimaginative illustration by Herb McClure of a few seagulls and three palm trees bending to the force of the storm.

Interestingly, the readers of the magazine were provided one thing that Murder in the Wind was lacking: a map. Not as cool as a Dell back cover, but helpful nonetheless, especially since MacDonald had placed the novel in a semi-real location. Route 19 and the bridge over the Waccasassa River were real, the detour road and house were not. 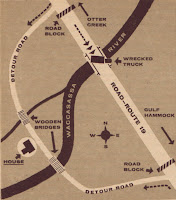 As was typical of the slicks of the time, MacDonald himself got a brief couple of paragraphs in the magazine's "Between the Lines" section, that post-table of contents section where selected contributors to that particular issue are briefly profiled. Nothing unusual is revealed, but it does provide a glimpse of what interested the author in 1956.

"John D. MacDonald, author of "Hurricane," the rip-roaring novel on page 105, is surely the only alumnus of the Harvard Graduate School of Business Administration who keeps solvent by writing fiction. He's been doing it for ten years, too. How it came about is hazy, even to him, but this odd switch has netted him a frolicsome life, envied by many of his classmates, and substantial capital gains in the form of stories, novels, movies, monies and prestige. He recently received the 1955 Benjamin Franklin Award for the 'Best Short Story.'

"If a hurricane like the furious "Hilda" of his novel swept away his beguiling home on a spit near Sarasota, Florida, the MacDonalds still could be roofed over by fleeing to their Adirondack retreat where they spend the summertime. John tries to work regular hours (the old business training, doubtless), but he says the world is teeming with things like golf, chess, music, fishing, collecting dueling pistols and striving to make an ever better Martini, which take his mind off the job. Don't you believe it! He is one of our leading merchants in the literary market place." 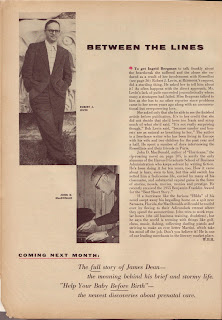 But the most interesting thing about the "Hurricane" that appeared in this issue of Redbook are the changes the author made, the scope of which are substantial enough to make the abridged version almost read like a different story. Characters are eliminated, their backgrounds changed, and people who died in the novel are spared in the shorter version. And since I don't usually discuss MacDonald's endings on this blog (as one of my hopes is that the reader will discover the work for themselves), I'm going to warn you not to proceed in case you haven't read the novel yet.

In Murder in the Wind, as with all of MacDonald's multi-character/perspective novels, one or two of those characters gradually through the course of the narrative evolve into the leading characters. They are usually one male and one female who eventually get together at the end (or are in the obvious process of doing so). These people are typically widowed, divorced or currently stuck in an impossible relationship. Murder in the Wind featured Steve Malden, a domestic counter-espionage agent presumably employed by the FBI, and Ginny Sherrel, a recently widowed New Yorker. Both are in their thirties, attractive (especially Ginny) and typical MacDonald protagonists. And while these characters are retained for "Hurricane," their roles are secondary to that of the Dorns, Hal and Jean, the young parents of two who are leaving Florida after two years following Hal's unsuccessful attempt at establishing an accounting practice in Tampa. In the novel, Hal is struck in the head by a falling tree limb and eventually dies as a result.

In "Hurricane" it is Charlie Himbermark who suffers death-by-tree and as a result he isn't around to get shot by Frank Stratter, which is a good thing since Frank and his two criminal cohorts, Billy Torris and Hope Morrissey are nowhere to be found in the abridgement. Their absence makes "Hurricane" completely devoid of any crime element altogether.

Steve Malden's occupation is different here as well. Although still involved in law enforcement, he has gone from being a federal agent to ex-cop, working as an investigator for a scary-sounding outfit called The Florida Protection Committee. The description MacDonald provides dredges up all sorts of images of 1950's citizen vigilantism, answerable to no one:

"The Florida Protection Committee, even though financed and operated by private citizens, carried considerable weight in Tallahassee, and with the city governments of large cities in the state. It was formed by hotel owners, real estate operators and the owners and operators of legitimate tourist attractions. These men knew that too often the criminal element made deals with local enforcement agencies. Should that situation get out of control, Florida would be overrun by an element which could readily destroy the reputation the state was trying to establish and drive away the sound and respectable people who were contemplating retirement in Florida. Gambling, prostitution, dope peddling and the resultant theft and violence would never be completely eliminated. But, with proper investigative procedures and pressure applied at the right places, it could be held to a reasonable minimum.

"Steve Malden's job was to establish sources of information, pay for information, protect informants, shadow suspects, observe illegal operations whenever possible and turn over thoroughly documented reports to the Committee for action on the state or municipal level."

And Steve Malden is supposed to be the good guy!

The entirely new sections of the story are reserved for the no-longer-dead Hal Dorn and his bitter, seething self-pity over the circumstances of his failure eventually give way to a new determinism, forged of necessity and out of crisis. Basically, the hurricane makes a man out of him. It is Hal, not Steve, who surveys the raging river and leads the small group to the shelter of the ramshackle house, and it is Hal, not Johnny Flagan, who takes charge once inside the place and begins assigning tasks to the people. Flagan, as a result, takes on the role of selfish coward. He pulls Ginny out of her car and makes an attempt to flee on the road they came in on, only to have the bridge crash under the weight of the vehicle. He is rescued from the river (by Hal) and brought to the house, where he is angrily confronted by Ginny. When he slaps her, Hal intervenes, only to be socked by Flagan, which in turn brings in the powerful Steve who leaves Flagan "whimpering."

The final paragraphs are reserved for the Dorns, as Hal informs Jean that he thinks the family should stay in Florida and live in a trailer if necessary. Surmising that there will be "a lot of work down here" as a result of the hurricane, he goes on and on in an attempt to convince Jean, who eventually answers with, "Please, darling. It will be a lovely trailer."

In the 1950's Redbook was advertising itself as "The Magazine for YOUNG ADULTS," and MacDonald certainly seems to have altered his novel to fit his audience. The focus on the young family instead of the older Steve Malden would have had greater resonance with the readership of this particular periodical, much more so that the slightly older audience of, say, Cosmopolitan. In any event, "Hurricane" is an interesting study of MacDonald's craft, how he developed narrative through character and how he could alter narrative by shifting focus. Going forward I will try and devote space to the condensed versions of the author's novels, assuming I own copies of them. 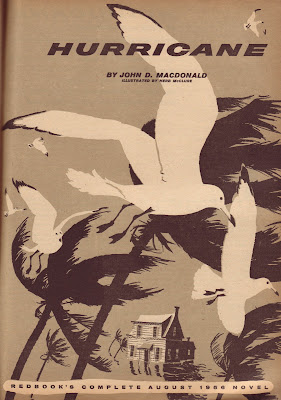