"Honeymoon in the Off Season" 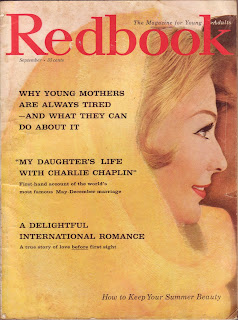 John D MacDonald’s long relationship with Redbook magazine began back in June of 1951 with the publication of his short story “Nothing Must Change,” the tale of a young artist and his older, previously married wife who struggles with the knowledge that her husband’s talents are less than what he believes them to be. From that point forward over the course of his career he went on to publish four more original short stories, two novel condensations (Murder in the Wind, published as “Hurricane,” and The Deceivers, published as “The Faithless”), and one short story reprint in the magazine. The short story originals are all of an ilk, tailored to the particular audience he was addressing: young adults, especially young female adults.

In the magazine’s September 1959 issue, the same month his novel The Beach Girls was published, MacDonald presented “Honeymoon in the Off Season,” a light, moderately amusing situation comedy concerning the travails of a newlywed couple who spend their honeymoon in a not-yet-fully-constructed hotel. And although the author skirts the dimensions of the tentative nature of a new relationship (it’s obvious there was no premarital sex involved here), the primary focus is on the hi-jinx of maneuvering around in what is basically an active construction yard for two weeks. The fact that MacDonald places the action in his own backyard -- either the southern end of Longboat Key or upper Lido Key on the west coast of Florida -- allows him to pepper the story with an authenticity and convincing sense of place.

Tom and Sara Browning have just left their wedding and are on an airplane to Florida. It was a wonderful affair, a fact they keep repeating to each other, disguising Tom’s feeling of dread that by marrying this beautiful girl he has somehow lost her. Their courtship was short and intense, and they spent every possible moment together.

They had spoken a billion words to each other, in cars, on long walks, in restaurants. They felt closer than any two people since the beginning of time. For an interminable time the wedding seemed impossibly remote. Then it was a month away,  a week away, a day away, an hour away, and then, incredibly, it finally happened and they were married. Now they seemed to have nothing to say to each other. He wanted to say to her, “Look, we wanted to get married, didn’t we? And now we are. So what’s wrong? Why do you seem like a stranger?”

So instead they fill the time with small talk. They talk about Palmetto Grove, the impossibly glamorous new hotel made almost fantastic by the brochure they had happened upon. This is a destination that would have been far out of the reach of the modest income Tom earned, but a surprise wedding gift from Sara’s uncle, and the fact that they are staying in September -- the off season -- made the destination not only affordable but downright necessary.  It has everything a couple in 1959 could dream of: air conditioning, kitchenettes in each apartment, three hundred feet of private Gulf beach, a swimming pool, television, restaurant and a bar lounge with live entertainment (The Harmonaires!).

Ahead was two weeks at a glamour spot, with waiters in white serving tinkling drinks to tanned and sophisticated people around the huge, free-form pool. There would be cocktails and dancing in the muted richness of the bar-lounge, carefree hours on the sparkling white-sand beach.

The couple arrive at Tampa airport and are slammed by the September heat. They drive their convertible rental car with the top down south toward Sarasota, only to encounter a sudden rainstorm that soaks them both before Tom can get the top up. After getting lost twice in downtown Sarasota, the couple finally find their way to Palmetto Grove, only to be confronted by a vast, unfinished mess.

The lobby part seemed to be nearly finished. There were piles of sand and lumber under wraps, roofing material, an abandoned and disconsolate bulldozer, and what seemed to be several acres of standing water ringed by mud. The architecture of the almost-finished portion was, indeed, extreme -- roof angle like the wing angle of a tilting seagull… [Inside] the lobby was high-ceilinged and huge. Four metal wash tubs were strategically placed, with water spanging into them. The one on the registration desk was nearly full.

The harried manager at the desk informs them that constant rain has delayed the construction, that there is only one room ready and that they are the only guests. With much trepidation the Brownings agree to stay, sans most of the amenities promised in the brochure -- including air conditioning…

The rest of the story is an account of their two week stay, among the construction workers, with their hammering and buzz saws. And, as you might expect, things work out, both between the newlyweds themselves and their time enduring the chaos. By the time they are ready to leave things have come along nicely and other guests have arrived. A nice, glib ending for a story where such endings are the expected thing. 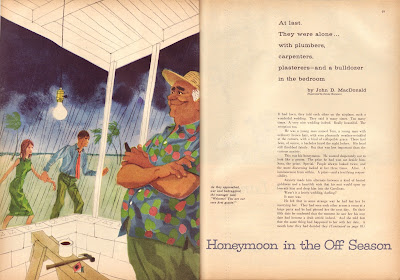 MacDonald would go on to write two more stories for Redbook, both with a little more weight to them and both considerably longer. (“Honeymoon in the Off Season” runs only 3,000 words.) His last appearance in the magazine occurred only a year before his death, an “excerpt” from his year-old pulp anthology More Good Old Stuff. The short story, which originally appeared in the pulps under the title “Killer’s Nest” and which had its title restored to JDM’s original for the anthology (“Neighborly Interest”), was published by Redbook under a third title, “The Fatal Flaw”. As far as I can tell it is the only John D MacDonald short story to have been printed under three different titles.

“Honeymoon in the Off Season” appeared only once and has never been reprinted.
Posted by Steve Scott at 11:25 AM