"The Fraud That Paid Off" 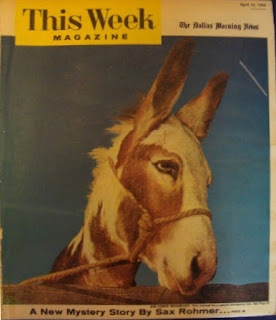 John D MacDonald’s relationship with the Sunday newspaper supplement This Week was a long and profitable one for the author. In began at the end of 1950 with the publication of his short story “I Love You (Occasionally),” a brief, humorous situation comedy about a man who tries to impress his wife and ends up putting his foot in it. From 1950 to 1958 MacDonald had at least one story published in This Week every year, and most of them were of this ilk: harmless little family misunderstandings that cause friction before resolving themselves nicely with a typically MacDonaldean happy ending.


In their April 22, 1956 issue This Week published their 12th JDM short story, “The Fraud That Paid Off.” Fans of the author who happened upon this title in their Sunday newspaper supplement could be forgiven for thinking this a crime story, perhaps along the lines of some of the stuff MacDonald had been submitting to the mystery digests of the time, like “The Killer” in Manhunt or “In a Small Motel,” in Justice, or perhaps something akin to his two most recent novels, April Evil and You Live Once.


Alas, they would have been -- and probably were -- disappointed. The “fraud” in “The Fraud That Paid Off” was not criminal or even illegal, and the payoff wasn’t monetary, it was romantic.


Protagonist Johnny Brewer works in a job that was very familiar to the author: he’s a production chaser in an assembly plant, an industry MacDonald worked in during his stateside stint in the Army. Johnny is young, capable, well thought-of by his superiors, and single. He is smitten by a particular young lady secretary, a fact known to many at the plant, and especially known to Kathie Morrison, the secretary of the Production Manager, Johnny’s direct superior.


Johnny Brewer's endless efforts to make a date with The Princess were well known and frequently commented upon throughout the big plant of the Kallston Corporation. The Princess, Miss Virginia Conway, was secretary to the Plant Manager, highest resident brass at the plant. In looks she was faintly reminiscent of Grace Kelly, with Kelly's same air of cool, polite, delicious unattainability. When an errand brought her down to the production floor, she did not look out of place -- she made the entire production floor look out of place. Johnny's varied and diligent efforts had thus far been rewarded by a frostiness of blue eyes, a tiny, pitying smile.

After a particularly stressful day caused by a missed order and a transposed figure, Johnny arrives at his boss’s office to report that everything is under control. He trades familiarities with Kathie, a “smallish” girl with red hair and gray eyes. (Uh-oh.)  After he is congratulated by his boss, Johnny intimates to Kathie that he will be spending the rest of the day dreaming of a date with The Princess. The “light of warmth and pride” fade from Kathie’s eyes as she returns to her work, muttering “Good Luck.”


[She] balanced her chin on a small capable fist and scowled. She had tried once to tell Johnny that Virginia had all the ripe, rich warmth of a servo-mechanism, but had only succeeded in angering him... Kathie knew he deserved better, but Johnny was not very bright about people. She scowled and thought and plotted.


So four days later, when Johnny happens upon The Princess at the water cooler and clumsily tries to strike up a conversation, he is startled -- just as the reader is not -- when she responds warmly and agrees to dinner that night at the finest and most expensive restaurant in town. After a wonderful dinner with the very attentive Princess, the couple sit together on a banquette holding hands while listening to the piano. Then she leans "her golden head close to him and, with a slant of mocking eyes [says], 'You've kept it a very good secret, you know.'"


The trite, obvious plot and resolution of “The Fraud That Paid Off” is only slightly salvaged by MacDonald’s terse, economic prose and occasionally humorous observations. But there’s nothing of real substance here, only a quick read for a Sunday afternoon in 1950’s America. We read them so you don’t have to.


Not surprisingly, “The Fraud That Paid Off,” (MacDonald’s original title, incidentally) has never been reprinted or anthologized. Like all of his This Week stories, it is available through the microfilm and digital archives of the various newspapers that carried This Week during all or part of its run. You may have a local library that has access to one of these newspapers, so you can collect them all if you are so inclined. “The Fraud That Paid Off” aside, there are some real gems in there.


The artwork for this story was done by the great Fredric Varady, one of the premier magazine illustrators of the mid-twentieth century. I would have reproduced the main artwork for “The Fraud That Paid Off” but, unfortunately, it depicts the story’s final scene.