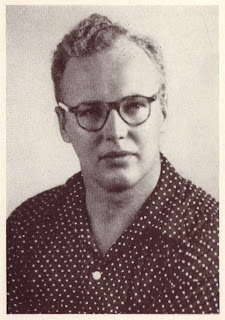 In June of 1947, when John D MacDonald was still a struggling author of short stories and novellas for the pulp magazines of the day, he and his family moved from their apartment in Utica to a home in the small university town of Clinton, New York. This was before the novels, before the science fiction, and certainly before Travis McGee, with only a couple of sales to the slicks to put on his trophy stand. In October of that year MacDonald managed to convince the editor of the town’s only newspaper, The Courier, to let him write a weekly column, the subject matter of which would be whatever came into the author’s head, titled From the Top of the Hill. (The MacDonald home was situated on a hill overlooking the town on the edge of the Hamilton College campus.). The gig lasted for seven months and produced 32 columns, whose subject matter ranged from jazz to local traffic problems, from family remembrances to book reviews, and it ended in May of 1948 after the death of Dorothy’s mother and the family’s decision to move to Mexico.


This column is from the May 20, 1948 edition of the paper and reveals a bit of JDM’s war background while stationed in India and Ceylon.


A boy in his last year of Syracuse U. was up the other day to talk about this odd business of writing. His yen is to write for the movies.


There is a funny thing about writing for the movies. Any shooting script or plot outline sent to any major studio is returned unopened. And they have a good reason.


Suppose you send in a script, they read it and reject it, and four years later you see a movie which contains a scene startlingly reminiscent of your effort.


The odds are that it is a coincidence -- based on the very paucity of available plots. But the courts are inclined to discount coincidence, and any suit you might bring would have a high nuisance value.


So how do you arrange to write for the movies?


One -- write a novel that sells well. Despite popular superstition, the vast majority of sales to the movies are in the one to five thousand dollar range. Suppose they want to give you five thousand. You say, "No. Give me twenty-five hundred outright, and a ten week contract at two-fifty a week to work on the movie treatment."


That is your 'in'. Whether or not they pick your option at the end of the ten week period depends on whether you are able to produce for them.


Two -- make a name in the smooth paper magazines. Sooner or later a studio will see movie possibilities in one of your stories. Every story published in national magazines, both slick and pulp, is read by people in the major studios whose job is to do nothing else.


Three -- and this is the new way -- graduate from the University of Chicago out of that Hutchens 'best books' course, or go to the Graduate School of the Cinema at the University of Southern California. Maybe you will be hired on graduation as a sort of apprentice. Dore Schary of RKO is a writer-producer. He feels that the hope of the industry is to develop specific movie talent in the writer-director-producer field, rather than acquiring people from other lines of endeavor.


And those are the three ways to cut yourself a hunk of those fabulous salaries out there. The fourth way is to be a nephew of one of the studio heads.


While with the OSS during the war, we got to know a few of the Hollywood names.


Gene Markey was one of them. When his navy promotion came through, elevating him to the rank of Captain, a certain Major Willis Bird and I went to see him. Bird said, "If you're real good, maybe they'll make you a major one of these days."


Birdie is now a bone buyer in Bangkok. In addition to importing 25¢ books. Every month he has to ship so many tons of ground bones to a chemical company in the US.


Gene Markey baffled me a little. He seemed, at first glance, to be such an unimpressive guy to have been married to all that beauty. [Markey's wives, up to this point in his life, included Joan Bennett, Hedy Lamar and, at the time this column was written, Myrna Loy.] But he has that charming knack of making any acquaintance feel that he, Gene, has been languishing around for years without ever having met as unique and marvelous a person as yourself. It is a wonderful knack to have.


Melvin Douglas was in the same headquarters as we were for a time. He was a fine, hard-working, reticent guy, forever backing out of the limelight with almost obvious annoyance. He organized an entertainment outfit and took them all over the theatre, with the one provision that he would work behind the scenes, never taking a bow.


[John] Ford, the director, was around for a time. He was a vast, moody, unpredictable man, hard to meet and harder to know.


In addition to the 'regulars,' some of the other Hollywoodians made flying trips through our malarial sector. We were in hospital when [Joe E.] Brown came through. The man with the mouth. He chatted with everybody. His son had but recently been killed in a plane crash in the states. Above that wide grin of his was a pair of the saddest, warmest eyes we have ever seen. No talent ever worked harder in our theatre.


Maybe the fates sorted out a few of the best for us, but those we did meet gave us the idea that the screen colony contains a batch of very fine people.


If you are a mature person of not more than three feet six inches in height, there is a promising career waiting for you as a model for the artists who illustrate the automobile and appliance advertisements.


Naturally, drawing automobiles with normal sized people in the front seat would make the cars look far too small. Thus the ads contain models who can barely reach the steering wheel and peer out over the bottom sill of the window.


This is also desirable with drawings of prefabricated houses. When the tiny models, who would have difficulty in reaching the knob on the front door, are posed in front of the prefab, it looks truly enormous.


Refrigerator ads utilize tiny women not more than three feet tall. If one of the models ever opened the door to the refrigerator, standing on tiptoe, a quart of milk falling out would smash her flat.


Some cynics affirm that this use of tiny models is to make the products look so huge that the public is enticed into buying.


We have a different theory. We feel that in the beginning the models and the appliances were in scale. And the artists have merely changed the scale to keep abreast of the rise in prices.


If the trend continues, we can expect to see refrigerator ads where the female model stands beside the product, a happy smile on her face, a scaling ladder in her hand and climbing irons on her dainty feet.


See you next week.