When John D Met the Movies and McGee 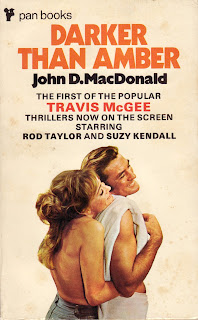 This article originally appeared in the November 12, 1989 issue of the Sarasota Times. It was written by MacDonald's No Deadly Drug collaborator Pete Schmidt.

WHEN JOHN D. MET THE MOVIES AND McGEE
--by Pete Schmidt

Editor's Note: A little over two decades ago, I collaborated with John D. MacDonald on his first non-fiction work, No Deadly Drug, the story of a celebrity murder case, the Coppolino Murder Trials, set in New Jersey and Florida courtrooms. We became good friends and his many kindnesses to me extended far beyond the period we worked together on "No Deadly Drug." He was past the half century mark in age but going like sixty in sales that November twenty years ago. One of the more creative and reliable writers on the contemporary scene, John D. was in Fort Lauderdale for the filming of "Darker Than Amber," the first of the Travis McGee movies which, if successful, would run through an artist's palette of colors and celluloid. Jack Reeves, an independent producer backgrounded in television, had purchased the titles to ten of the McGee paperback originals. Budgeted at $2 million-plus, the film was shot in the Miami, Key Biscayne and Lauderdale area. On this day, MacDonald was meeting McGee. And he asked me to tag along.

It was mid-afternoon Tuesday and a gray sky thoughtfully delayed its threatened rain and shadowed an armpit dampening sun.

At Bahia Mar, the scene of the day's shooting, crew and cast ant-crawled across concrete piers and keys, pulling cables, dollying cameras, positioning props; directors and assistant directors eyeballed scripts, checked camera angles and barked instructions. Female extras, needed for a party scene, bare mid-drifted aboard the yacht like two-layer cupcakes with platinum frosting; the bronzed male extras, sideburned and athletic paired off with the beach bunnies and warred for an on-camera spot close to Jane Russell.

John D. eased himself into a deck chair and watched the beehive surrounding him. Hemmed in by party girls and their escorts, he looked like a hostage in a Ken and Barbie doll factory.

"This somehow reminds me of the Coppolino trial," he said wistfully. "This world is so unreal. Quite frankly, I didn't base McGee in the Sarasota area for fear it would be a success and if movies followed then all this"---and he waved his arm toward the actors and cameras---"would be in my own backyard and I didn't want that."

Reeves introduced two women from Palm Beach who, as the day wore on, sandwiched the producer like expensive bookends.

"Here's the man responsible for this," Reeves told the ladies.

The director was shouting at the actors through a megaphone, ordering the extras lining the yacht's starboard to make Jane Russell fight her way along the rail and through the crowd of revelers to carry on a conversation with McGee (played by Rod Taylor, an Australian actor and ex-boxer) as he docked his boat, the "Busted Flush." (Actually a seaman in a bottom deck compartment docked the craft while McGee-Taylor, at the topside helm, pantomimed the maneuver.)

"All of you should be smiling," the director yelled. "You've been boozing it up for awhile. Make Jane struggle to get past you to yell at Rod."

One of the extras, eyeing the Russell figure and bosom that hung over motion pictures of the late 40's and 50's like thunderclouds spread over a landscape, leered.

The character played by Russell, as John pointed out, was the product of the Hollywood scripter of the original McGee books, many of which refer to the marathon parties on a yacht, "Bama Gal," but they are hosted by a man. In the wisdom of Hollywood, the host had become a hostess and lost to film fans was the delicious double-entendre name of the booze and broad-stocked boat.

Jane Russell had just blown her line for the second time and the director was ordering another take when Reeves asked John D.: "How would you like to be doing this all day?'

"How would you like to write the same page over each day," he responded. "Or spend three months on a manuscript and then make the ethical decision you can't kid the readers and dump it all into the waste can?"

"The thing I've always wanted to do is come away from a sneak preview and hear my colleagues say---not knowing I'm there---that it was one helluva picture. Then it's all worthwhile," Reeves said.

"Frankly I've always looked upon producers as being like a mule. He doesn't quite create the products, but he keeps on trying," cracked John D.

Travis McGee, the hero of the MacDonald series, was and still is one of those fictional characters actors are anxious to assay in hopes of striking the box-office motherlode that MacDonald received from the reading public. At the time Steve McQueen, Robert Mitchum, Robert Culp, Vic Morrow and Jack Lord, among others, had expressed interest in the role. John D. was satisfied with the casting of Taylor who, he said, "has that certain persuasion needed to have the ladies following him about ...a face that looked lived in ...the gentleness that appeals to women and the manliness that appeals to men."

"In the public mind, in the past, the people have mixed me up with McGee," said the author. "Then when they meet me there is this terrible look of dismay. Now Taylor can be McGee and I can be me. People are always asking me where I get the ideas for McGee's escapades with the ladies, too. I tell them I have very uninhibited friends who do the research and report back to me."

"Watching a film version of McGee is interesting," he continued, "and must be considered in the context of cinematic values. For instance, McGee is an old fashioned guy and I may develop this during one five or six page passage. In the movie, they establish it with McGee looking at a pop-top beer can, inverting it, and popping it open the old-fashioned way with a can opener."

"I try to change McGee imperceptibly," he continued, noting he worked on four books simultaneously. "I keep him in an indefinite age bracket but he is altered by the previous books. What effect the fleshing out of McGee on screen may have I don't know."

The Jane Russell-Rod Taylor scene was finally completed and a light drizzle had begun to fall when Reeves, Bikel, the Palm beach bookends and MacDonald gathered at the Bahia Mar restaurant.

Outside, in trailers rented from Ivan Tors Studios---"The Home of Flipper"---Taylor was readying for his bedroom scene with Suzie Kendall…

Bikel was forking through a mountain of cottage cheese resting on a bedrock of fruit salad when John D. excused himself for the drive back to Sarasota. Passing the rented trailers he smiled and pointed out the label on Bikel's trailer had two "L's." He smiled, stopping to give a fan his autograph and pose for a snapshot with another.

Driving home he was silent for the better part of an hour, then he began to chuckle.

"God, what a day," he said. "It's hard to believe that I sat for two hours watching them shoot a 60 second scene that took Jane Russell nine tries to correctly emote lines I never wrote in the first place!"