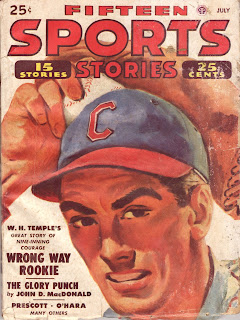 If there is a pecking order among the different kinds of pulp magazines that flourished and then died in the last century, sports pulps would have to be pretty close to the bottom. Not that they weren’t popular in their day, they were, but if we are to judge popularity by the sheer number of different titles published, sports pulps (specifically all-sports pulps) rank below every other major type of pulp magazine. This makes sense, after all, because the sports pulps had to compete with the real thing, not only as played by real sportsmen but in the daily reportage of games in newspapers everywhere. But between 1923 and 1949 over fifty different all-sports pulp magazines were born, titles as inclusive as All-American Sports, New Sports Magazine, Sports Short Stories, or as specific as Big Baseball Stories, Basketball Stories or even Rodeo Romances (two different kinds of pulps in one, I suppose). By 1957 all but two of them, Super Sports and Ten-Story Sports,  had died, and those two gave up the ghost early that year.


John D MacDonald wrote for the sports pulps, a fact that surprised me when I first learned of it, and it still surprises people unfamiliar with his early writing career. Next to his mystery stories and his science fiction stories, nothing matches the quantity of sports short stories he wrote. And depending on how expansive the definition of sports one accepts, that number comes very close to his science fiction output. He wrote 29 stories that appeared in sports pulps, plus at least a dozen or more that were published in other kinds of magazines, both pulp of slick. The first JDM sports story to be published was “Coward in the Game,” and it was included in the November 25, 1946 issue of Short Stories. His first sports pulp appearance came in March 1947 with “That Old Gray Train,” but not before he had a second sports story appear in the January 4, 1947 issue of Liberty (“Hole in None”). That title is actually a fantasy tale, which allows it to appear in lists of both MacDonald’s sports stories as well as his science fiction tales. In fact, there are sports in all kinds of JDM writing, from mysteries (“The Deadly Game of Darts”) to sf (“Half-Past Eternity”) to even his novels. There’s tennis in Contrary Pleasure, Murder in the Wind and Bright Orange for the Shroud, and of course Travis McGee once played football.


MacDonald himself was an avid fisherman, and he counted boxing and golf among the sports he played and participated in at one time in his life. He wrote expertly about those fields, and also wrote well about auto racing, baseball, tennis, football, hockey, bowling, and even bull-fighting. JDM bibliographer Walter Shine once wrote, "... his sports writings ranged through so many fields as to suggest a multiplicity of writers, rather than a single one. The technical knowledge in each seems to be that of a seasoned student of the sport -- rather than an occasional onlooker ... Whatever he, or we, may now feel about the quality of the fiction, any of us would be hard put to fault the sports expertise he showed."


But who remembers this? I wrote back in 2009: “MacDonald's sports stories remain the least anthologized of all his fiction, with the possible exception of the mainstream work he produced later in his career for slicks like Good Housekeeping, Redbook and the Saturday Evening Post. Unlike the mystery and science fiction fields, there doesn't seem to be a subculture of fanatics and collectors clamoring for the re-publication of stories with titles like ‘Buzz-Saw Belter’ or ‘Fight, Scrub, Fight!’”


The story appeared in the July 1949 issue of Fifteen Sports Stories under one of MacDonald’s house names, John Wade Farrell, and it’s probably a story JDM was later glad was not identified as his. It’s not bad, just mediocre, a college football story about a new head coach coming in an upsetting a lot of apple carts. For the football fan it is full of technical details about plays, formations and tactics, but for the reader of fiction there’s little ground here that hasn’t been covered by hundreds of other writers in thousands of other stories.


The backfield in question is the offensive backfield of Mideastern, a mid-Atlantic college that could be a stand-in for any number of universities, but here probably one in New York or Pennsylvania. The team is down in Florida during an Easter Vacation break, training for the next season. This backfield for Mideastern consists of fullback Charlie Western, two halfbacks, Bus Milligan and Sancho Sanchinelli, and quarterback  Hal McKeever, who is also the first-person narrator. They are a unit that has been together since before college, on a service team, and were recruited together to play for Mideastern. And they have been very successful. The previous season they "smashed the Ivy League, broke the hearts of our two Big Ten guests and piled up a lopsided score in the bowl game." Every coach this backfield has had has made attempts to try out other players for those three positions, but no one has ever taken one. That’s because McKeever manages to make every tryout look bad by flubbing their timing. “Why should he break it up,” Bus asked. "We're a winning combo. This is our last season coming up. We're the inner circle..."


[He was] a mountainous person named Bunny Hale, a recent fullback from the [pro] Burros. About twenty-nine years old, one of those boys who go to so small a school that they never make a clipping until a smart pro team grabs them and turns them loose on the publicized kids from the bigger outfits. With the Burros he had made a three-year average of 5.1 yards every time they handed him the ball. Maintaining such an average against outfits like the Packers is akin to consistently throwing rocks through a concrete wall.


After Hale is introduced at the first team meeting, he speaks to the troops about his initial impressions.


"I've been watching movies of you people. For a college team, you do good. Timing okay, fundamentals fair... The line has holes this season, but I think we can plug them. You have a lot of power in the backfield. You run too many off the T and not enough single and double wing. You could have added another three touchdowns to the season total last year by forgetting that T within the five-yard line and punching Western over from a single-wing, unbalanced line either way."


The following day the practices begin, and all morning Hale tries out new possible members of the backfield, and every one is mistimed by one of the group. But Hale persists, and it isn’t until late in the day when he puts the four together to show what they can do. Only now, Hale has suited up himself and will play defensive fullback. He manages to embarrass them on every play, to the point that they begin arguing and blaming each other. When the insults get bad enough, McKeever has to be held down as he tries to throw a punch at his fullback… 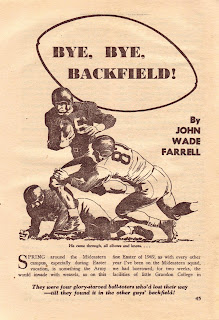 Of course the professional Bunny Hale knows what he is doing and things eventually work out once the insular backfield is shown the selfish error of their ways. There’s really little going on in “Bye, Bye, Backfield” that isn’t predictable or ho-hum. MacDonald’s prose is sharp and professional, and his descriptive powers used to create scene and character in a few, beautifully chosen words is on display, but the plot he uses is definitely thread-worn, even for 1949.


“Bye, Bye, Backfield” was one of four John D MacDonald stories to be published in this particular issue of Fifteen Sports Stories, the most to appear in a single issue of a magazine, pulp or otherwise. And one of those four stories was “Blue Water Fury,” one of the author’s very, very best short stories, so good he included it in his 1966 anthology End of the Tiger and Other Stories under the new title “The Big Blue”. It was the only pulp story included there. So I suppose he can be forgiven for coming up a bit short with “Bye, Bye, Backfield”.


The story has never been reprinted.
Posted by Steve Scott at 1:00 AM