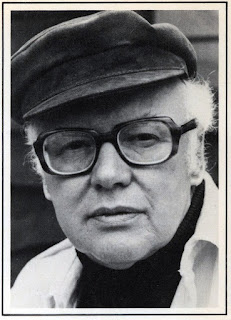 In November of 1978 the University of South Florida held the first ever John D MacDonald Conference on Mystery and Detective Fiction, organized by Professor Ed Hirshberg and sponsored by the college’s English Department and the Popular Culture Association. MacDonald himself was there and dutifully sat through the readings of several scholarly papers on his writing, and he responded to each paper, both at the time and a year later in the first issue of Clues: A Journal of Detection. The press was there as well, and I’ve transcribed the Miami Herald’s version of the event. It’s short but worth reading for the last three paragraphs.

This appeared in the November 20, 1978 edition of the paper.

Herald Staff Writer TAMPA – John. D. MacDonald, the author who made writing paper. backs a respectable profession, the Harvard graduate whose Travis McGee character is South Florida's favorite beach bum, the environmentalist who scared the plaid burmudas off high rise dwellers with his best selling Condominium, stood before his audience Saturday as bemused as a saint listening to his own eulogy.

"A situation like this, is enough to make any author pretentious," MacDonald said with a touch of modest wonder in his voice. "I have to go home and cure myself of you all."

THE SITUATION was a two-day McDonald fest, Friday and Saturday at the University of South Florida in Tampa, an easy drive from his winter home near Sarasota. More than 150 people in business suits and blue jeans, evening gowns and halter tops, paid $20 apiece to chat with him at a cocktail party in his honor, dine with him at an awards dinner, and listen with him to literary analyses read by scholars who came from as far away as Iowa.

"I neither encouraged nor discouraged all this academic attention," MacDonald confided to a reporter, "It has just sort of grown, and it is damned amusing."

All this academic attention was a product of The Popular Culture Association, a national group of professors and students whose athropological study of the seemingly mundane of modern American life has grown in a decade from an object of scorn into scholarly respectability.

“If you call a course a classics, then the kids won't come," explained Charlie Sweet, a professor at Kentucky University. “However, if you call it the History of the Detective Story, you can give them Edipus Rex, Hamlet and Crime and Punishment."

Sweet argued that the study of popular culture - which can be anything from MacDonald's novels to the evolution of gas station architecture — requires students to use the same critical faculties needed for dissertations on "the blue-eyed imagery in Beowolf."

ECHOED RAY BROWNE, a professor at Bowling Green University in Ohio, “Our major purpose is to alert students to the complexities of modern life.

It may be academic, but it's also fun, and MacDonald's insightful observations of the Florida of the last 25 years – sprinkled into tight plots peopled with entertaining characters - have made his large body of novels and stories a favorite grist for the popular culture mill.

The association's attention, in turn, leaves MacDonald on the verge of becoming the next Sir Arthur Conan Doyle, whose Sherlock Holmes stories a half century ago have been raptly dissected for decades by such organized admiration societies as The Baker Street Irregulars.

That level of intense interest was evident at the Tampa conference. For instance, take Peggy Moran, a professor of English at Purdue University in Indiana, who delivered a paper on women in the Travis McGee novels.

Cataloging more than 100 female characters in the 17 McGee books, she analyzed how MacDonald had faceted a serious character who is deeply introspective about his relationships with women. The hero who, despite his macho life of action and conquest, thinks there is more to love than a Playboy Club key.

"The male-female roles in the McGee novels," concluded Moran, "are MacDonald's answer to the loneliness of the one-night stand."

FRANCIS NEVINS, a law professor at the St. Louis University Law School, researched MacDonald's earliest works, the more than 160 stories he wrote for the now largely extinct pulp magazines that died out in the early 1950s.

"John is the last of the great story tellers, who honed his skill in the pulps, the training ground of all the great, hard-boiled writers," said Nevins.

MacDonald glanced to the sky occasionally when some of the papers contained phrases like "Manichean dualism" or "socialistic relativity," but took the whole experience right down to the long line of autograph seekers and the man in the green Hawaiian print shirt who insisted that MacDonald's wife Dorothy photograph him with her husband - in good humor.

"It is rather strange to be examined in this fashion," he noted, saying he felt somewhat like Early Man being disinterred by a paleontologist. He acknowledged his use of what he termed "folk dance aspects” of formula detective fiction, but spoke of conscience as being what can make detective stories something more than hack writing.

"AS A WRITER, I still feel like an imposter," he confessed. "It is like someone's given me a license to steal. It's wonderful to work at something you love and get paid for it."

The fact that MacDonald isn't an imposter content to make an easy buck by combining formula writing with static characters came out in a discussion of his next McGee novel now under way.

Moran had asked for a hint of how McGee's romance with Gretel, chronicled in the recent Empty Copper Sea, is progressing and MacDonald revealed: “ At this moment her ashes are in a bronze urn waiting for McGee to take them back to California for burial next to her brother."

With a small groan, Moran cried out: "But you should have spared her."

MacDonald, with a helpless shrug of an author whose characters now have lives -- and deaths -- of their own, replied: "I tried to".