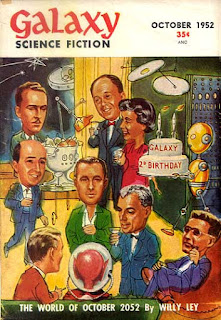 John D MacDonald wrote three science fiction stories that were published in that best-of-all sf digest, Galaxy magazine, two in 1951 and one in 1952. By the time that third effort -- “Game for Blondes” -- was published in the magazine’s October edition, the author’s interest in sf was winding down to its ending point, at least as far as the science fiction digests were concerned. He had written over 50 stories, published in nearly all of the prominent sf pulps and digests of the day, from Startling Stories to Astounding Science Fiction, from Thrilling Wonder Stories to Super Science Stories. In 1951 he had written seven stories and one novel, his first sf book-length effort, Wine of the Dreamers. But seven in ‘51 was way down from 13 in 1950, and Wine of the Dreamers wasn’t original, it was an expansion of one of those novellas. Likewise, his second sf novel, Ballroom of the Skies, which appeared at the end of 1952, was itself a rewrite of an earlier Super Science Stories novella titled “Hand from the Void,” and his total short story count that year was a paltry two. (That’s only if you include “Incubation,” which appeared in a hardcover anthology.) Either MacDonald had said all he wanted to say in the field, or he had lost interest in it entirely.


Or, perhaps, he found that it was just not enough of a challenge. In his 2000 biography of MacDonald, The Red Hot Typewriter, Hugh Merrill quotes a letter the author wrote to an unnamed correspondent where he explains why he had lost interest in this particular kind of fiction:


I think [science fiction] is a marvelous exercise of the imagination, as you can say things behind the scenes in science fiction that you wouldn’t dare say in straight fiction. Don’t tell this to any science fiction writer, for God’s sake, but I got the feeling that it was a little too easy. You are cheating on reality. I remember I had an argument with MacKinlay Kantor... and I said to him, “You know, I have a problem when I want to define character. If I want to make a guy really stupid and excitable I have to build that,” I said. “But you and those historical things—you can have him run into a room and say, ‘They just fired on Fort Sumter and the whole thing will be over in two weeks!’ and okay, you’ve lined your guy out as a stupid fellow.” It’s almost the same kind of thing in science fiction. You can cheat, you can do a pretend history... Contemporary reality is the most difficult thing to write about because we’re all in the midst of a big cloud of dust and you hear the horses running by but you don’t know who’s winning. 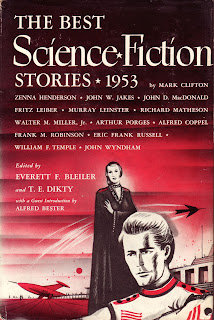 If MacDonald’s interest in the form was flagging in 1952, his abilities certainly were not. “Game for Blondes” is one of his very best short stories of any genre, a dark, intense rumination of failure, regret and ultimate redemption, built around time travel and a future not that much different from today. The story’s superior qualities were immediately recognized: it was anthologized in two contemporary collections, Bleiler and Dikty’s The Best Science-Fiction Stories: 1953 as well as in The Second Galaxy Reader of Science Fiction in 1954. In 1978 it was included in MacDonald’s own sf anthology, Other Times, Other Worlds, where editor Martin H. Greenberg called it “a minor classic” and had this to say about it in the story’s prefatory remarks:


This is simply one of the most powerful psychological stories in American science fiction… It has a lovely, hard-boiled feel about it that expresses the multiple pulp influences of the author.


The story still packs a wallop today, 64 years after its initial appearance, and no matter how many times I’ve read this, its effects never wear thin.


If “Game for Blondes” had been published in anything other than a science fiction digest, one would be hard pressed to guess that the story was science fiction until late into the text. We meet the protagonist, Martin Greynor, in his now-natural location and in his now-natural state: in a bar and drunk. Not recent-drunk but permanent-drunk, a condition he has wallowed in for three weeks now, precipitated by his careless, anger-induced driving that resulted in a crash and the death of his beloved wife Ruth.


Now it was New Year's Eve. Ruth was gone. His job was gone, the car gone. Money was left, though, money a-plenty. Funny about drinking. The wobbling, falling down, sick stage lasts about twelve days, he discovered... Then you're armor-plated. Liquor drops into a pit, clunk. Walk steady, talk steady. But in come the illusions on little soft pink feet.

And the illusions have come, to accompany the dissipated person Martin has become, unwashed, unshaven, rancid and stinking, to the point that he has been kicked out of the nicer drinking establishments he used to frequent in his previous life. Sitting at the bar in one dingy dive he imagines his wife as she once was:


The bar mirrors are enchanted. Ruth stands behind you. She said, "Never run away from me, darling. You'd be too easy to find. Wanted -- a red-headed man with one blue eye and one brown eye. See? You couldn't get away with it." The face that looks back has been gaunted, because you stopped eating.


Outside he he sees Ruth ahead of him, hurrying down a dark street. He calls after her, she turns, revealing "a wattled mask" that rasps in a "mocking gin-husky voice," "Ya wan' something, sweetie?"


The illusions don’t seem to be limited to ghosts of his dead wife. This particular evening he looks in the mirror of a nameless bar and sees three young women, all blondes, looking intently at him. Had he seen them before? He can’t remember. He leaves the bar and walks down a slush-filled street, drawn to life by the author’s wonderful prose.


Next block. Don't turn right. That will take you toward midtown, toward the higher prices, toward the places where they let you get three steps inside the door, then turn you firmly and walk you back out. Stay over here, buster.

They'd rolled him a few times that first week. Made a nuisance to go to the bank and get more cash each time. Now they'd stopped bothering. One of the times they'd left him sitting, spitting out a tooth, His tongue kept finding the hole.

Neon in the middle of the next block. Two couples sitting on the curb.

Spotted by the prowl car.

"Break it up! Move along there!"


Then he notices the three blondes following him. “Three blondes. Three arrogant, damp-mouthed, hot-eyed, overdressed blondes -- sugary in the gloom.” He ducks into the closest bar and they follow him in, regaining their watchful place at a table near the bar. When a male patron makes a pass at one of them, they give him cold looks, and when he persists the poor fool suddenly turns "fast and hard and went high and rigid into the air. Martin saw him go up in that jet-leap of spasmed muscles, head thrown back, agony-masked face. He fell like something pushed out of a window."


For the first time since Ruth’s death, Martin begins to feel real fear and makes a run for it… 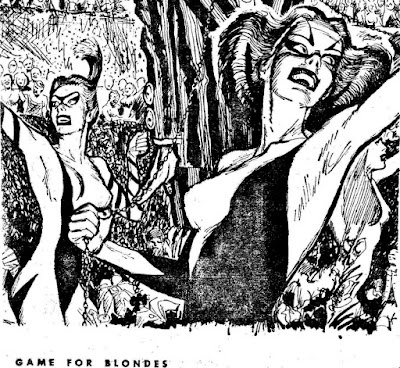 What resonates in “Game for Blondes,” besides its clever science fiction angle and trick ending, is the hopeless, lost quality of the protagonist, a successful man for whom the good life has ended and who seeks escape and punishment in the bottom of a bottle. It’s a fictional device that MacDonald had used at least once before, in his 1947 novella “You’ve Got to Be Cold,” although never to better effect than in “Game for Blondes.” The regret is palpable and the dissolution Martin has consigned to himself is not only gritty and unflinching, it is the result of a new-found self-awareness he was only able to attain through tragedy. And it is a state that could only be redeemed through science fiction.


MacDonald would go on to write only one more sf story for the digests, “Labor Supply,” which was published in a 1953 issue of The Magazine of Fantasy and Science Fiction. And as I’ve documented here on this blog many times, the author never categorically gave up writing science fiction, it was simply published in other kinds of magazines (Bluebook, Playboy, This Week) and was, for the most part, science fiction of a different kind, bordering more on psychological horror and the workings of the mind. Still, if the qualities of the stories he did write for the digests are an indication of his talent in the field, he could have very well become a science fiction “name” had he decided to keep at it. What he left us are five-score works of fiction that, for the most part, still resonate today.


“Game for Blondes” is currently out of print, even in JDM’s Other Times, Other Worlds, which, for some reason, still has not had its initial eBook publication. Used copies of that paperback anthology are fairly easy to find, and it is a collection that belongs in the library of any fan of the author’s short works of fiction -- any kind of fiction.
Posted by Steve Scott at 1:00 AM