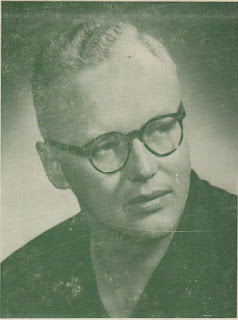 When John D MacDonald began his literary career in late 1945, he didn’t set out to be known primarily as a writer of crime fiction. His sights were set high and he imagined himself as a creator of “serious” works to be read by serious people. Eight hundred thousand words and reams of rejection letters later, he lowered his sights and focused on the pulps, where he eventually found a home producing hundreds of short stories and novellas. Some of his early tales are what we would call “mainstream” stories, published in periodicals such as Cosmopolitan, Collier’s and The American Magazine, but when MacDonald started writing novels in 1950, it was crime and science fiction that filled the early bill.

It wasn’t until his ninth novel, Cancel All Our Vows, published in May 1953, that he produced a genuinely mainstream work, and he did it in style, going hardcover. It wasn’t the first time the author had done this, as his two earlier science fiction novels were hardcover, but they were niche novels, and Cancel All Our Vows was the real thing: a book about infidelity in modern American society. It was published by Appleton-Century-Crofts, a now extinct second-tier concern that, nevertheless, gave a good effort at publicizing and promoting the novel. They purchased an ad in the New York Times Book Review and made the author available for interviews by the press of the day.

One such conversation was with Rochelle Gibson and was syndicated in newspapers throughout the country. I found a copy of it printed in the Tucson Daily Citizen and have transcribed it below. This version of the piece seems truncated (did she really begin the first paragraph with the word “actually”?), and it is filled with errors, including the very title of the book (!), but it contains enough JDM thoughts to make it interesting reading. I wonder just how serious he was in his comments about the strata of meaningfulness in fiction?

Cancel All Our Vows never showed up on a best seller list, didn’t get a second printing, and took two years before appearing in paperback, so the all the publicity went for naught, although the novel was certainly worth the effort. A year later when MacDonald was ready to publish his second mainstream hardcover, Contrary Pleasure, he went to 22 other publishers and was rejected by them all, forcing him back into the arms of Appleton-Century-Crofts, who published a single printing of the book and provided no publicity whatsoever.


"Every society has its own rules," he notes, "and we are living today with a set of specific, pretty well-underlined rules. They are underlined by the church and by just the common ethics, and they are good rules because through them we have a cohesive society.


"It is important that a man and woman live together and raise children, and the home is an important social unit. Where you get social conflict today is where you have somebody violating the social rules under which we are living.


"This book is just an exploration of what happens when two people who have a good relationship[ to each other come into forcible conflict with one of the rules, and it affects their relationship to each other. People don't realize that it isn't in effect a violation of any basic human relationship; it's a violation of the rules. But rules are constantly changing. Compare what is acceptable now to what was acceptable in 1890. And as a matter of fact, the husband-wife relationship is probably healthier now than it was in 1890.


Cancel All Vows is the first hardcover book for MacDonald, who is 38 and makes about $100,000 a year writing magazine stories, soft-cover novels, mysteries and science fiction. The Damned, his 11th paperbound book, sold a million and a quarter copies. One that Dell is publishing was a serial in Collier's last year, and there are a few others coming out soon.


"I want to do more hardcover books," he says, "because it is not only a prestige thing, but you feel you are reaching people you can't otherwise."


As he sees it, "if a story is only meaningful on the top layer, then it is magazine fiction. If it is meaningful on a the secondary layer, with symbolism and so on, then maybe it is softcover fiction. If it is also meaningful on a tertiary level, I would say it is a hardcover book. Then, if it has multiple layers of meaning going way, way down, of course it is a great novel -- and it doesn't matter where it is published. Some of our greatest works were published in cheesy newspapers.


MacDonald's history as an author began during the six wartime years he served overseas with the OSS. Simply because he got tired of writing routine letters home, he sent his wife a short story instead, which she promptly sold to Whit Burnett, of the old Story magazine, for $25.


Back in the States he did about three million words at 1/2 cent and 1 1/2 cents a word for pulps, at the same time selling occasionally to the better magazines. In the first year he had stories accepted by Liberty, Collier's and Cosmopolitan. Then as the slick-magazine sales began to improve, he did less and less pulp writing and has not ceased completely.


Born in Sharon, Pa., and currently dividing his time between Sarasota, Fla. and the Adirondacks, MacDonald is an alumnus of the Harvard graduate school of business administration, where he went at the instigation of his father, now retired, who was vice president and treasurer of Savage Arms Corp.


"There has been a cult of taking down the businessman," he notes. "It started before Babbitt, and I see no particular basis for it. This will make me sound like a member of the NAM, but why should he be talked down any more than a grocer or a painter or a neurosurgeon for that matter?


"There can be a certain amount of glamour in the way he makes a living, because what can be more glamorous, for example, than just the idea of taking stuff out of the ground, like the Ford Co. -- iron ore -- and in a period of maybe four months from the time it's ore in the ground having it go 75 miles an hour down the New Jersey Turnpike? That's creative. I don't at all see why the businessman should be low man on our particular artistic totem pole."