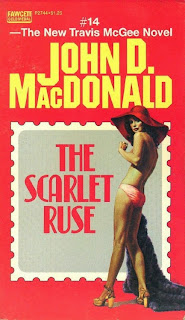 In the summer of 1973 following the recent publication of the fourteenth Travis McGee novel (The Scarlet Ruse),  the book’s publisher Fawcett sent MacDonald out on a cross-country publicity tour to tout the event. Scarlet was, of course, the last McGee to be published as a paperback  original: the following effort, The Turquoise Lament, was hardcover, as were all subsequent McGee’s. MacDonald, a homebody if there ever was one, hated these tours and each one seemed worse than the one before it, especially once his health issues started appearing. His wife Dorothy accompanied him on this trip, but not on all of them as she had her own laundry list of health problems to deal with.


But this trip was unique in one respect: Fawcett had written MacDonald’s itinerary so that it included visits to various company printing and distribution centers, where the author could rub shoulders with the low-level men of the publishing world: the salesmen, printers and drivers who actually put JDM books into retail establishments. With nearly all of the author’s novels still in print in 1973, this accounted for a lot of titles, and a lot of sales. And MacDonald enjoyed this part of the junket, writing to pal Dan Rowan “It was one of your typical rotten publicity tours. The good part was the early morning talking to the drivers and the route men. The bad part was everything else.”


The schedule was grueling, including stops in Atlanta, Detroit, Minneapolis, Chicago, San Diego, Los Angeles, San Francisco, Portland, Seattle and New York. At each stop he would meet with a member of the press, one who in all probability had never read a word of his writing and whose research usually consisted of a paragraph of blurb supplied by Fawcett. A case in point was the article written in his stop in San Diego, where columnist Jim Degraw of the Copley News Service described JDM as “not a big man. About five-feet-8. Slightly stooped.” MacDonald was six-foot-2, so Degraw was only slightly off…


Reading many of these articles only brings home to the student of JDM just how tiresome they must have been for the author. The same questions asked, the repeating of the first-short-story sold, the MacDonald-McGee comparisons, the description of his writing habits... it’s a wonder John didn’t explode. But each article reveals a courteous, friendly man who was obviously “on” for the press. Almost all of the stories include a sentence or two about how nice the author was. But once the meetings were over it was a different story. MacDonald admitted to Rowan that during the trip he “had four crashing migraines, and several fits of the uglies.” He compensated himself and Dorothy on this “shitty trip” by spending lots of money on twenty dollar lunches and thirty dollar dinners and expensing it back to Fawcett. When they returned to Sarasota they immediately packed the van and headed for the relative solitude of their summer home on Piseco Lake in upstate New York.


His stop in New York City, which included a kind of a tryout for his subsequent interview on The Dick Cavett Show, resulted in the following article, which was syndicated throughout the country. It is more expansive and detailed than most of the other fare that resulted from this tour, although once again we are dealing with a reporter who has read little or no work by his subject -- a fact that he practically admits. The piece contains errors that even the casual observer of JDM wouldn’t make, but the piece is worth reading nonetheless, especially for the end of the penultimate paragraph, which I’ll bet is something even serious students of the author didn’t know.


The Paperback Revolution
by Leslie Hanscom


(New York) The paperback revolution, its success rooted in a method of mass distribution with which hardcover publishers can't compete, has given birth to a new kind of literary reputation. A writer can now achieve celebrity by appearing only in paperback, without benefit of the prestige that comes from appearing first in hardcover. Perhaps the most conspicuous example of the author who would be famous if no such thing as a hardcover book existed is John D. MacDonald, the crime suspense writer who has lately been touring the country paying thank-you calls on the great folks who made it all possible.


MacDonald's paperback publisher, the House of Fawcett, has been steering him from city to city to meet and ingratiate the distributors, route men and truck drivers who are responsible for delivering what he writes to the discount drug stores and corner tobacconists. It was a kind of courtesy call that is not without precedent; Joseph Conrad once came out to Garden City to thank the employees at the Doubleday plant. But it doesn't happen often, partly because not every writer is equipped to charm truck drivers (Conrad panicked in Garden City and made a speech that was remarkably inarticulate for a lord of language). In MacDonald's case, however, the meetings must have been a blazing success. Any writer whose works sell 46 million copies has to know something about hitting it off with the common folks, and besides that MacDonald comes on as the most winning of nice guys.


The other afternoon, at the conclusion of the tour, he was imbibing a martini in the lounge of the
Algonquin, a spot which, in defiance of all revolutions in the book world, remains the rallying
place of writers, editors, and publishers at the cocktail hour. Here, too, he seemed easily to fit in,
although a stranger might have taken him for a publisher rather than a writer. A tall man in
glasses with a tufting of snowy hair at the top of his head, he looked also -- in his attire of sports jacket and mod checked pants -- like a successful early retiree to Florida, where, indeed, he does live, although in a state far from retirement. As for the resemblance that everybody looks for  -- a likeness to Travis McGee, the amateur detective of his invention who accounts for many of those eight-digit sales -- there was none to be seen. On the tour he had just completed, MacDonald said, the only really wearisome thing was the repetitious question: "Do you live a life like Travis McGee's?"


The detective, whose 14th adventure, The Scarlet Ruse, has just appeared, lives alone on a houseboat in Miami, from which he goes forth to meet great perils. MacDonald lives in a house in Miami, designed by Dorothy, his wife of 35 years, who was sitting across the cocktail table from him, looking like his description of her as "my protector and preserve." "No, I don't live like my heroes," MacDonald said. “I like to be home, feeding my duck and my goose, leaving the typewriter when Dorothy rattles my dish." Actually, there are two homes. The other is a summer place in the Adirondacks to which MacDonald moves to spend the fall "after the vacationers are gone." In both places, the work goes on, in a contented, unending routine which has enabled him to produce 63 books so far.


A lady editor from Lippincott came over to the table to add relish to his martini by telling him jubilantly that The Turquoise Lament -- which will be the first of his books to make its debut in hardcover -- has been chosen as an alternate selection of the Book-of-the-Month Club. "Good," he said kissing her, "that will let me spread my propaganda to the world even wider." (MacDonald likes to interrupt his crime suspense yarns with philosophical digressions about life and society, but when asked about what doctrine they convey, he laughs it off as an unserious question. The MacDonald message, as I am told by a colleague who has read much of the author's vast output, seems based on Mammy Yokum's golden rule: "Goodness is better than badness because it's nicer.")


At John D MacDonald's end of the writing game, which is where the writer writes for money but tries to do it with conscience and craftsmanship, the important thing, as he sees it, is to bear in mind that there is an audience out there. This explains his practice of including the name of a color in each of the adventures in the Travis McGee series. "It's a simple code," MacDonald said. "Nothing annoys a reader more than buying a book and then finding out that he's read it. The colors are a way of helping readers keep the titles straight." But there are 14 Travis McGee novels already; hasn't he exhausted the palette? "Oh, no," MacDonald said. "I looked at one of those leaflets of house painter's samples and found out there are more than 30 colors still to go. I don't know what the titles will sound like when I get down to colors like fuchsia and puce, but we'll wait and see."


That same tender concern for the reader doubles MacDonald's labor by causing him to discard a good deal of what he writes. "Once at the place in the Adirondacks," he said, "I burnt a backlog of about 2 million words. My son helped me, and it almost killed him. He was in prep school then and hated the idea of writing a three-page composition. To see all that writing go up in smoke broke his heart." The first Travis McGee novel published was the third that the author wrote. "In the first one," MacDonald said, "McGee came out sort of stolid and germanic. I did it over to lighten him up, and now he was too much of a wise guy." MacDonald said he had no use for a detective who wasn't likeable, as he found Ian Fleming's James Bond not to be. "That snob, that Fascist, that conspicuous consumer," MacDonald said, "he isn't a man I'd like to have a drink with."


Most readers find Travis McGee to be such a man, and in that sense, there is a likeness between him and his creator.
Posted by Steve Scott at 1:00 AM