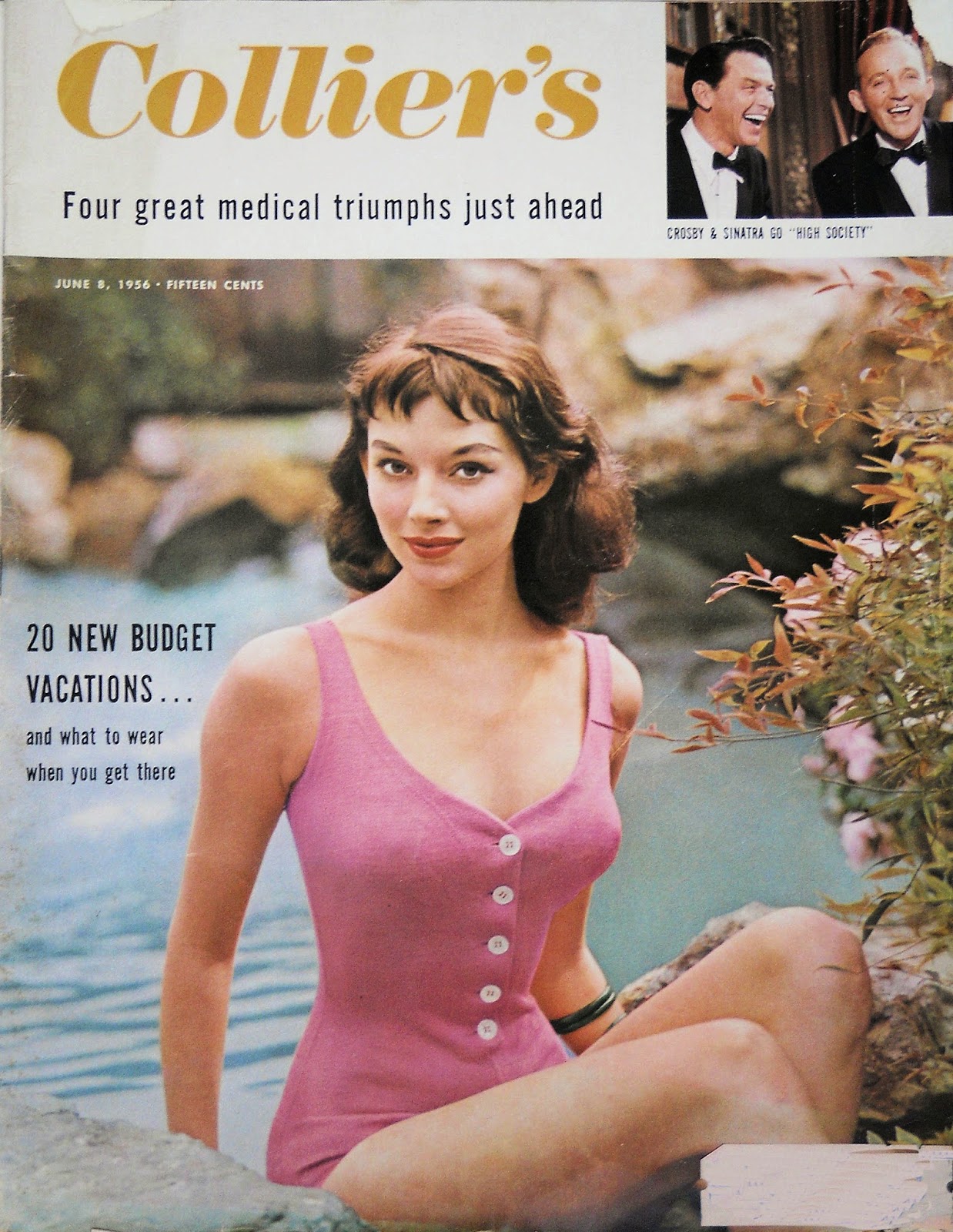 “The Men Women Marry” is a John D MacDonald short story that appeared in the June 8, 1956 issue of Collier’s magazine, the author’s eighth and final appearance in the weekly slick that began seven years earlier with “Looie Follows Me.” Between these two titles saw the publication of a five part serialized novel called “My Brother’s Widow” (which MacDonald later rewrote as the paperback original Area of Suspicion); a couple of excellent mysteries: “Who’s the Blonde?” and “Dead on Christmas Street”; a sports story about racing called “Elimination Race”; a three-part serialized novel that should have been redone for publication as a book called “Flight of the Tiger”; and a mainstream family piece called “The Unsuitable Girl.”


Mention Collier’s magazine to anyone under the age of 60 and you’ll probably draw a blank. It’s as obscure a title as other once-big newsstand denizens of a bygone era with names like Woman’s Home Companion, The American Magazine, Today’s Woman and McCall’s. But in its day -- from 1888 to 1957 -- Collier’s was a big deal, a weekly bedsheet-sized combination of “fiction, fact, sensation, wit, humor and news.” In the early years of the last century it published lots of groundbreaking pieces that would today be called “investigative journalism,” but was then known as “muckraking.” A few of the series published were of historical magnitude due to the legislative results of the articles. Upton Sinclair’s April 1905 article titled “Is Chicago Meat Clean?” -- published a full year before his famous expose The Jungle came out -- is credited with the passage of the Meat Inspection Act of 1906. The same year Sinclair’s article was printed, Samuel Hopkins Adams began an eleven-part series exposing the general fraud behind most then-popular patent medicines. Titled “The Great American Fraud,” it let to the passage of the Pure Food and Drug Act the following year.


But mismanagement and a general change in tastes led to a long period of decline during the 1910’s, and in 1919 the magazine was acquired by Joseph Palmer Knapp and his Crowell Publishing Company, who ran the periodical for the rest of its run. Things gradually improved and Collier’s eventually became one of the two major weeklies that contained both news and fiction, the other being, of course, The Saturday Evening Post. By the time the war ended in 1945 Collier’s was the 10th most popular newsstand periodical in terms of circulation, trailing behind other long-gone titles such as McCall’s, Woman’s Home Companion, Look, Life, and The Saturday Evening Post.


In 1948 the magazine hired a new fiction editor, a 26 year old former editor from the Armed Forces weekly Yank, Knox Burger, a man who would go on to become a major player in the John D MacDonald story. It was Burger who purchased “Looie Follows Me,” and MacDonald never forgot him for it, or the experience of receiving his first big check.


I remember where I was when they bombed Pearl Harbor, and where I was when Kennedy was shot, and where I was when I got word of the first four figure sale. One thousand dollars. I was standing in the main post office in Cuernavaca in 1948 and I ripped open an envelope that told me that Knox Burger, then the fiction editor of Collier’s, had paid that amount for a short called “Looie Follows Me.”


In 1951 Burger left Collier’s to edit paperback originals for Dell, and in 1954 MacDonald began having his novels published by Burger’s firm after doing eight novels for Fawcett Gold Medal. When Burger jumped ship to Fawcett in 1960 MacDonald went with him, and from that point forward every JDM paperback was published by Fawcett, even though Burger left in 1970 to form his own literary agency. And it was Burger, of course, who finally got MacDonald to agree to create a series character, who eventually saw print as Travis McGee.


Collier’s was known for the brevity of its articles and fiction, to the point that even world class contributors like Franklin D Roosevelt and Winston Churchill were ordered by editors to shorten their copy. Nowhere else was this mindset more evident than in the magazine’s weekly section called “Collier’s Short Short,” where an entire piece of fiction had to fit onto one or two pages, along with artwork and even advertising. Both “An Unsuitable Girl” and “The Men Women Marry” appeared as Short Shorts, with the latter clocking in at a mere 2.000 words.


“The Men Women Marry” is one of MacDonald’s “family problem” stories, devoid of any crime, mystery or even bad intention, where parents wring their hands over the actions of their children or the relationships their children have fostered. In this respect it is nearly identical to “An Unsuitable Girl” (with a different gender child) and very similar to a This Week story from 1955 titled “Too Young to Marry.” The fact that all three of these stories appeared around the same time (“The Men Women Marry” was published in Collier’s June 8, 1956 issue) may have been connected to the fact that MacDonald’s own child Johnny (now Maynard) was sixteen years old.


Walter Tyler is concerned about his daughter Kath, but wife doesn’t understand his concern. Kath has fallen for a boy by the name of Carl, and things seem to be getting serious enough to start thinking about marriage. Kath’s previous boyfriend was a musician, and while both parents are relieved that that particular relationship has ended, Walter is still worried, but for different reasons this time.


"[Carl is] just -- too darn' plausible. Too perfect. He hangs on my every word. He calls me 'sir.' He keeps hopping up to do this and that. He's got salesman manners... He's selling us, and maybe he sold Kath the same way... I just don't know the guy, and I can't seem to get to know him. I can't seem to get beyond that attentive politeness of his."


This complaint comes over breakfast one morning, and Mrs. Tyler reminds Walter that they are having guests over that evening: Kath and Carl, and Walter’s sister Helen and her bore of a husband, Ralph. (MacDonald’s unfortunate title for this short story was “The Triple-Plated Bore,” mercifully changed by a Collier’s editor.) Walter’s consternation over this recalled duty is only assuaged by the possibility that Carl will become so bored with Ralph that he will head for the hills. Ralph is a classic JDM “type,” an all-too-familiar comic gasbag who is succinctly described in a single paragraph.


Ralph... was a big, meaty man with a big, meaty voice... He had a vast assortment of opinions and stated them in a way that was at once so positive, so heedless of the possibility of disagreement, that the listener felt a compulsion to disbelieve. When Ralph turned his heavy face and his boiled eyes toward you and said, with utmost dogmatism, "The sun will rise tomorrow" -- said it harshly, imperiously -- you found yourself wishing it wouldn't. Ralph had perfected a defense against contradictions. He simply refused to notice them.


Dinner that evening is everything Walter feared it would be: “deadly.” Ralph is his usual obnoxious self and Carl treats him with the same perfect, almost robotic respect that he shows toward Walter, even agreeing and laughing with Ralph. After dinner the men retire to the living room and Ralph continues bloviating his many opinions. At one point Walter eases himself out of the room and heads upstairs to give his ears a rest, leaving Carl alone with Ralph. A few moments later he hears the creak of floorboards and, unobserved, sees Carl heading up the stairs and into the bedroom. Standing in front of a dressing-table mirror, Carl seems an entirely different person, to the point that Walter wonders if his future son-in-law is actually insane… 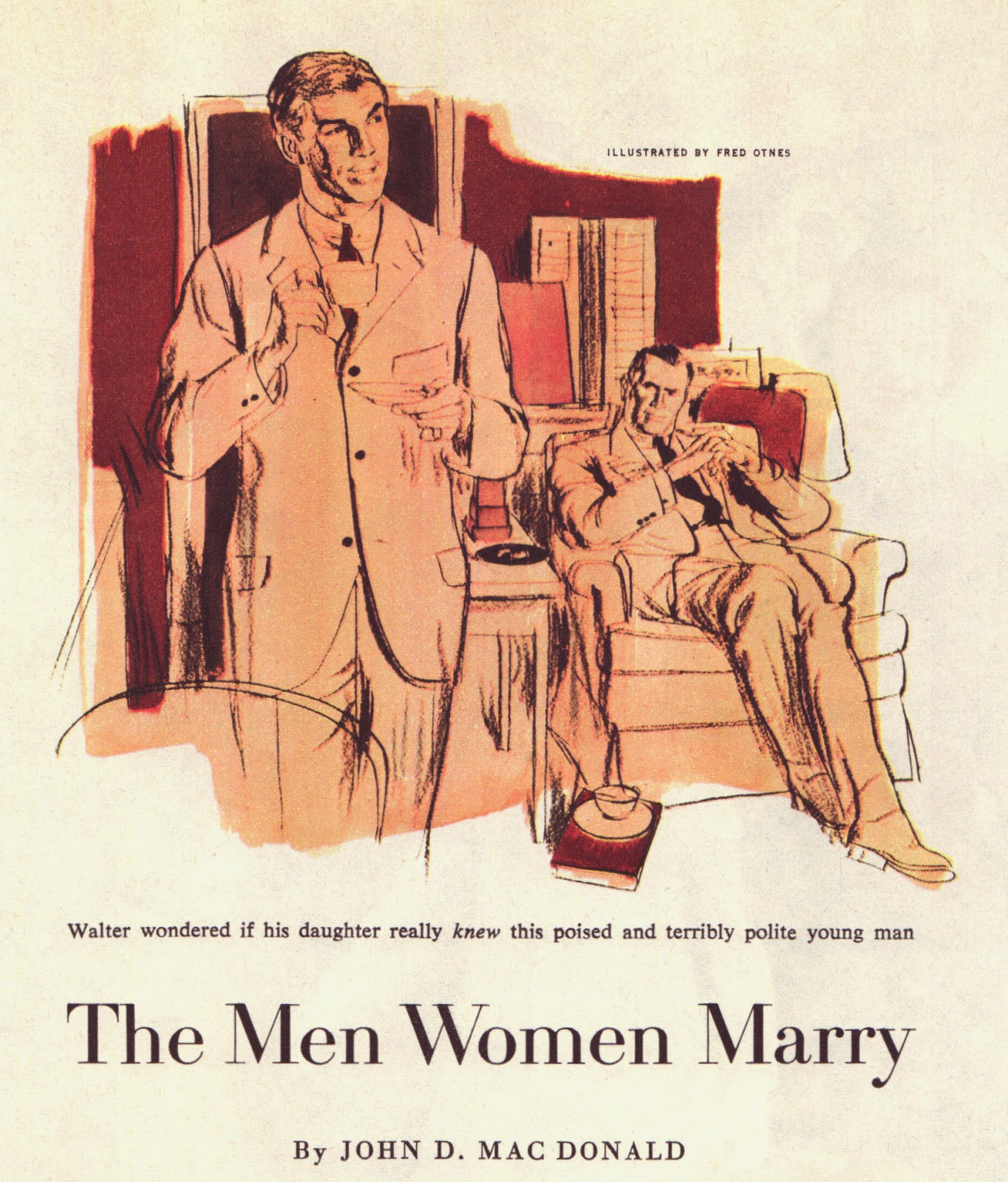 There’s not much to see here, really, outside of MacDonald’s ability to paint entire worlds within a few well-crafted sentences. The story is negligible and the ending entirely predictable, as glib as any in the JDM cannon. Still, it’s one of ten JDM short stories that have recently become available as eBooks (eShortStories?) from Peril Press. “The Men Women Marry” is the only one bundled with another story, MacDonald’s other Collier’s Short Short, “The Unsuitable Girl.” For only 99-cents you can own both, available from Amazon or Barnes & Noble. The cheesy cover the publishers provide for this set is completely misleading; it’s an illustration of a pulp-cover dame shooting an automatic pistol. It’s kind of hard to blame them, really, as there’s really no action in either tale, and the story art for both of them -- provided with the text of the stories -- wouldn’t sell a book if they were ice water in hell. 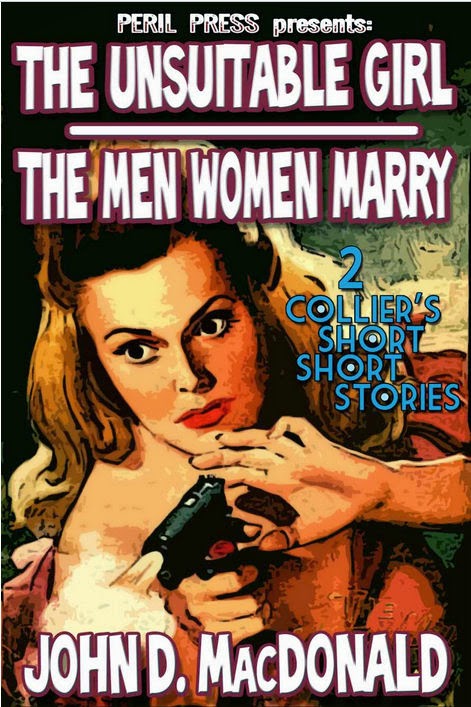