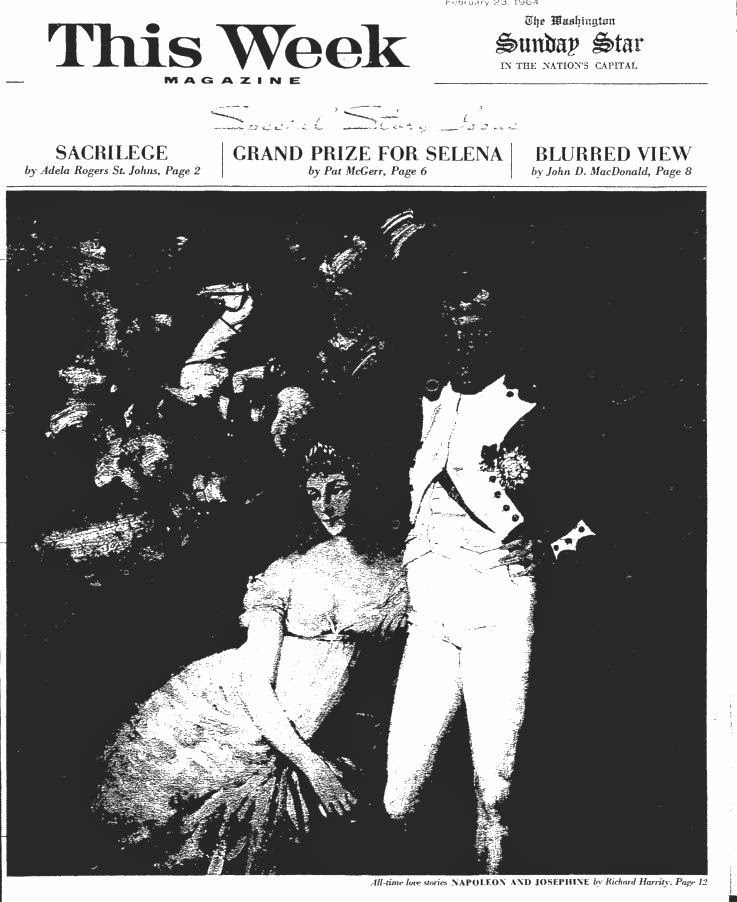 John D MacDonald wrote short stories and novellas for over 70 different general circulation magazines during his 40 year writing career, magazines that covered every special and general interest one could imagine. He wrote for the pulps. He wrote for men’s magazines like Argosy, Cavalier, Climax and Playboy. He wrote for special interest magazines like The American Legion Magazine and the Catholic The Sign. And he wrote for the mainstream slicks like The Saturday Evening Post and Collier’s, Redbook and Cosmopolitan, Family Circle and The Ladies’ Home Journal -- magazines prominently displayed on every newsstand in the country and whose circulations reached into the several millions. This was where the real  money was for an author of fiction during the middle part of the last century, and MacDonald was paid well.


But no magazine had the circulation that This Week boasted. That’s because of its delivery model: it was included as part of the Sunday edition in scores of American newspapers, heavyweights like The Los Angeles Times,  The Baltimore Sun, The Washington Star, The Cleveland Plain Dealer and The Boston Herald. Begun in February of 1935 it started out being carried by 21 newspapers with a combined circulation of more than four million. Over the the next thirty years the magazine’s growth was explosive: eleven million issues per week in 1955 and a high of over fourteen million by 1963. These numbers dwarf those of contemporaneous newsstand slicks -- four million got a periodical into the big leagues, with only a few like Life (5.6 million) and Reader’s Digest (ten million) exceeding that. This Week was about 80% fiction when it began but gradually started including non-fiction as time went on. By the time John D MacDonald got his first This Week story published in 1950 it was down to, at most, two short stories per issue.


That first story, “I Love You (Occasionally)” which appeared in the December 1950 issue, set the template for the kinds of tales MacDonald would write for the magazine for the next few years. These were light, breezy tales of suburban families, all nearly identical (father, mother, and two children of opposite genders) that concerned some comic misunderstanding usually caused by the father. The titles of the other early stories illustrate this better than I can: “He Knew a Broadway Star,” “What are the Symptoms, Dear?” and “She Tried To Make Her Man Behave.”


Eventually MacDonald’s This Week stories began to take on a more serious tone, beginning with his seventh story for the magazine, “The Man Who Almost Blew His Top,” (great story, lousy title) which concerns an incident of 1950’s road rage and how it enlightens a man to a growing alienation from his family. By the time “Blurred View” was published in the February 23, 1964 issue, the author had seventeen This Week stories under his belt and many of them dealt with crimes of one kind or another. And like MacDonald’s writing in general, the This Week stories got better and better as time went on.


“Blurred View” is told in the first person by Frank Fletcher, the protagonist -- and the bad guy. He’s married to Gloria, a gregarious, flamboyant, hard-to-control television actress, beloved by her many industry friends but no longer by Frank. He’s an artist, but probably not a very good one and his work is in a “lull” right now. Gloria’s income and her shrewd investments have allowed the couple to build a beautiful cliffside home in San Francisco, complete with a large studio for Frank. 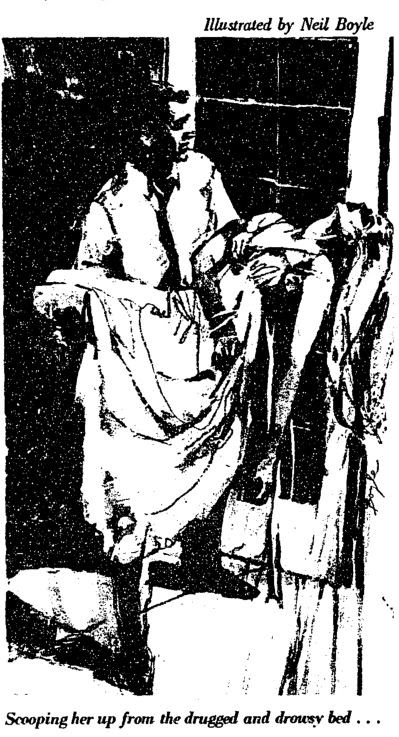 Frank is having an affair with a New York widow named Helen, a woman a few years older than he. She is small and plain but had a good figure and is quite wealthy. So what’s an unhappy, unproductive husband to do? He murders his wife. He drugs her and once she is unconscious he picks up her body and brings it out on to their terrace and dumps her off the cliff. There is an inquest, where Gloria’s television friends turn out “in numbers that astonished the officials,” and the ruling determines her death to be either accidental or a suicide. After the funeral Frank takes a long recuperative trip to the Islands, where he meets up with Helen, who is unaware of Frank’s crime and who drops more than a few hints about marriage. Figuring that Gloria’s wealth will support his bachelor life sufficiently, Frank is non-committal, but that doesn’t stop Helen from planning to move to San Francisco to be near him. Frank returns home to the scene of the crime.


After I had been there alone for five days, a seedy little man arrived in the afternoon. He drove up in a battered little car and came to the door carrying a big manila envelope in his hand. He was trying to say he had something to show me. He was humble, and nervous, and had a little recurring smile like a sudden grimace. He smelled sweaty. Something about him alarmed me. Reluctantly I led him back through the house.


His name is Walsik and he is an assistant manager at the local Thrifty Quick. Several months ago he dropped a case on his foot and was laid up for weeks at the home of his brother in law, a San Francisco doctor, who just happens to own another cliffside house near Frank, with a distant view of Frank’s terrace. Oh, and Walsik’s hobby is photography, and he has a camera with a 1600 mm lens, and he was testing it out on April 10, the day of Gloria’s death.


Without giving too much away (but I probably am), “Blurred View” is another in a long line of JDM stories and novels where characters use modern technology to warp reality in order to elicit a confession of guilt from a wrongdoer. Think “The Telltale Heart” with a tape recorder. And with MacDonald, sometimes it is tape, other times photography. In “Linda” it was tape, and the trick didn’t work on the title character but it did on her lover. In “Double Hannenframmis” the only crime was a bad relationship, but the reaction to the recording ended one relationship and began another. With film, the trick was actually used by the bad guy in The Turquoise Lament, a ruse later unravelled by Travis McGee. And in MacDonald’s 1950 short story “Breathe No More, My Lovely” photography is used in the exact same manner as it is in “Blurred View.” With the same results.


“Blurred View” is a beautifully written 1,900 words, the perfect example of a tale told without a single unnecessary word. It is told in flashback, beginning at Gloria’s funeral, shifting back to the inquest, then to the post-funeral legalities and on to the stay in the Islands, all done in the space of four very brief paragraphs. The structure of the short story is brilliant, and reveals itself even more on repeated readings. The author once wrote about how he came up with where to begin a story or a novel and it is still instructive reading today:


“Once I have the story… I establish  a clear sense of the ending , and then I try, through trial and error, to find the most useful beginning. The right point in time to start a story is tricky. Begin too far back from the dramatic peaks and the story becomes slow and labored. Begin too close to the tensions and the pace becomes frantic. There are no rules except the subjective  sense of “feel.”


Read “Blurred View” and you will understand how he mastered that particular problem. And in 1964 MacDonald was at the peak of his powers as a writer.


MacDonald thought enough of “Blurred View” to include it among the stories in his first short story anthology End of the Tiger and Other Stories. Included were three other This Week stories, “End of the Tiger,” “The Loveliest Girl in the World,” and “The Straw Witch,” which should give one a feel for just how good his work for this magazine was; the very nature of the newspaper supplement forced him to be as concise and precise as he possibly could be.


And if you’re interested in reading “Blurred View,” End of the Tiger and Other Stories is now available as an eBook on Amazon and Barnes and Noble. Also, used copies of the paperback, which saw eight separate printings from 1966 to 1987, aren’t too hard to find. And there’s another way, by which one can read not only “Blurred View” but all of John D MacDonald’s This Week stories. Thanks to the digitization of much of the runs of city newspapers throughout the country, formerly microfilmed versions the stories are available online. You can purchase them like I did through a service like ProQuest, or if you are lucky enough to live in a city that has (or had) a newspaper that carried This Week, you may be able to access these digital versions through your local library system. The Washington DC Public Library, for example, has the entire run of the old Washington Evening Star (which I used to deliver when I was a boy!) available to their members, who can access the archives from home and download PDF versions of the stories for free. Perhaps one day we can view the old pulps this way.
Posted by Steve Scott at 3:44 AM

Labels: Anthologies, End of the Tiger and Other Stories, This Week