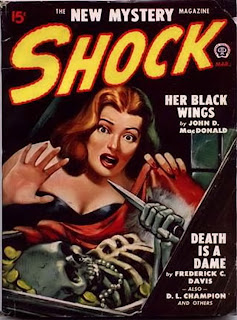 Pulp stories don't come with better titles than "Her Black Wings," a 1948 tale by John D MacDonald. It reveals so much to the reader, even before looking at the first sentence or turning the brittle page to view the story art. There's going to be an air of foreboding mystery, a bad, possibly supernaturally evil female, a hero who is helpless in her thrall, and strange, enigmatic questions at the end that never get answered. It has the ring of a story from the pages of Weird Tales, or from Willis O'Brien's classic radio series, Quiet Please. In the hands of a writer like MacDonald, it should be superlative fiction, even if this was a field he rarely ventured into. The student of JDM immediately thinks of the brilliant 1950 tale from Fifteen Mystery Stories, "Miranda." Is the protagonist telling the truth? Is he crazy? Is the female real? It's the epitome of great pulp fiction, the kind that keeps you up at night.

Except in this case, "Her Black Wings" was an editor's choice of title to replace the author's lame original, "Help Me Find Judy," a title that sounds like it belongs in the table of contents of an early issue of McCall's  or Woman's Home Companion. And as for the quality of the writing, well... I knew "Miranda," "Miranda" was a friend of mine, and "Her Black Wings," Senator, is no "Miranda."

The plot is interesting, containing all of the great elements listed above, but its execution is poor, marred in places by sloppy writing, careless characterization and the occasional turn of phrase that rings completely foreign to the ear of an experienced JDM reader. It seems rushed and overly formulaic, the kind of thing one could find in the pages of any number of pulps throughout the golden age. Still, it is a quick and enjoyable read, with a neat twist at the end, followed by an element completely out of left field that leaves the reader wondering if the protagonist is the king of all unreliable narrators.

The story appeared in the first issue of the pulp Shock, "The New Mystery Magazine," which hit the stands in March 1948. If you've never heard of Shock before, don't feel bad: it lasted only three issues before disappearing into the ether. The magazine's focus was on "Shock-Mystery" stories, a rather ill-defined category that could mean anything, since many existing pulps contained tales that could fit that description. Shock was published bi-monthly by New Publications, one of the many imprints of Popular Publications, Harry Steeger's vast pulp magazine empire. Shock may have been an attempt at reviving the shudder pulp genre, albeit in a form more acceptable to postwar readers, or it may have been a stab at combining that genre with mystery stories. It's hard to tell from the first issue, as it contains no editorial comment whatsoever, not even a masthead. The best indication of the tone of the magazine comes from the stories' taglines supplied by the editors:

"Death is a Dame" by Frederick C. Davis: "Was she really his wife? Or was she evil-souled Zelda -- biding her time until her next murder?"

John D MacDonald supplied stories for each of the three issues of Shock, one for the premier issue and two each for the second and third. His second stories in the subsequent issues appeared under the house name Scott O'Hara.

The tagline for "Her Black Wings" provides a good synopsis to the story's plot: "Three men had loved her -- and died violently. I was next..."

Told in the first person, the story opens as Joe Brayton, a World War II vet, is standing on the 34th Street subway platform in New York City, waiting for a train to take him up to Columbia University where he hopes to enter graduate school. As the train approaches the crowd moves toward the edge, followed by a sudden commotion.

"He didn't yell. I saw him go over the edge, half turning, his mouth wide open and silent, his fingers working fast on the empty air. His shoulders looked square and solid under the brown gabardine. They weren't solid enough. He hit the rails a split second before the steel wheels of the express ground him to blood and paste."

As the shocked crowd mills around the messy accident, Joe spies a girl standing next to him.

"She was tall, dressed in a sleek gray suit. Her pocketbook was a wardrobe trunk for the Singer midgets. Her black hair came down lush and thick on one shoulder. She had that city anemic look -- cheekbones pushing against the pale flesh; a thin, patrician nose. Not the lips. Full of life and vitality. Her eyes were gray with a strange unfocused look."

Joe's attempt at a casual remark goes unanswered, and he looks down at the girl's hand and sees blood. She's squeezing her wrist so hard her long nails have pierced her skin. When she finally speaks it's in a blank tone: "I told him he would die. I told him."

Joe wipes the blood off with his handkerchief and leads her away to a nearby drug store so he can treat her wound. Then it's off to a bar for a stiff drink. Joe orders the silent woman to down the slug of whiskey he had ordered, and once she does she seems to emerge from her catatonia and comes apart at the seams. Joe moves over to her side of the booth and comforts her, "murmuring a lot of nothing" until her hysterics cease. Then they talk.

The girl is named Judy Dikes and the platform victim was Ralph Lortz, Judy's boyfriend. Although there is no reason to suspect any foul play involved in Lortz's death, Joe asks if anyone knew if Judy and Lortz were together earlier, and when told no, he checks with Lortz's place of employment to see if anyone there knows where he is. They don't.

Judy was "nice and easy to be with," and Joe begins to feel like "a boy scout on a mission." He comforts her, reassures her and gets her to cheer up. They spend the rest of the afternoon at the bar, then head up to the Village for dinner. By two in the morning Judy begins "to look like the nicest thing that had ever happened to me." But when Joe hints at a deeper relationship, he is warned away.

"'You're nice, Joe,' she said. 'Pick up your marbles and run, Joe. Run like hell... run while there's still time... Ralph Lortz was the third one in two months. The third. Bill Graff fell in front of a taxi. Stanley McQuade fell out of his apartment window. Get away from me, Joe. I like you. You don't want to be the next one, Joe. Do you?' She laughed and the sound of it was like small, sharp white teeth nibbling at my spinal cord."

Joe takes her home, where she collapses the minute they enter her apartment. He puts her to bed and upon exiting the place is confronted by a man who immediately throws a punch at him! The attack is clumsy enough for Joe to dodge and counterpunch "harder than I wanted." When the guy comes to Joe learns his name is Michael Burns and that he lives in the apartment across the hall from Judy. He claims to be an industrial designer who is in love with Judy, an unrequited love that he is waiting to be reciprocated. He's also "keeping her going until she gets a job."

Joe immediately suspects Burns of being the guy who is causing all of the "accidents" involving Judy's boyfriends. He questions him, then tries to trick him, but it seems as if Burns has an alibi for each mishap. Still, Joe is suspicious enough to begin carrying a gun with him, a "little Spanish automatic [he] had won in a crap game in Paris." He keeps it in his jacket pocket as he continues to date Judy, and as time goes on he begins falling in love with her.

It is here where MacDonald's prose goes off the deep end, as he writes some uncharacteristically bad and florid sentences that must have truly embarrassed him if he ever had the chance to re-read them later on:

"It was tough to take my eyes off Judy every few minutes and take a look around. There was color in her cheeks and her lips were made for laughing. Once when we got behind a stack of shrubbery, I pulled her close and kissed her. She was laughing at the time, but after the kiss she stood close to me and I looked down into her eyes and everything was very solemn between us -- like a chord of organ music you overhear as you walk by a church.

"She didn't answer. She nodded her head quickly and lifted her face to be kissed again. It would always and forever be too late to ever leave her.

"May [is] the month to be in love in Manhattan. You can be in love almost any month anywhere else, but it's good to save it until May when you're in the big town. We went everyplace that people go and did everything that people do and there was nobody in Manhattan except the two of us...

"I tried to make plans for us, but Judy always steered me away, saying, 'Oh, Joe. Don't be dull. We've got a million tomorrows with sunshine every day.'"

Things seem to be going swimmingly in Loveland for several weeks, but then Judy starts to become 'jittery." She begs Joe to take her back to the place in the park where they first kissed, and Joe agrees. As they sit down on the same bench, a cool breeze blows and Judy shivers, shoving her cold hand into Joe's jacket pocket. "What on earth have you got in that pocket, Joe?" she asks...

MacDonald doesn't seem to know exactly how he wants the story to end, so he steers it one way, then another, and leaves the tale with an unanswered question. "Her Black Wings" contains the germ of a good, if overused pulp plot, but it would take the author a few more tries to perfect it. As these kinds of tales go, it's an enjoyable reading experience, as long as you aren't expecting too much from a writer who could do much better. 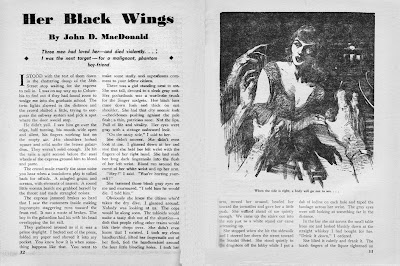