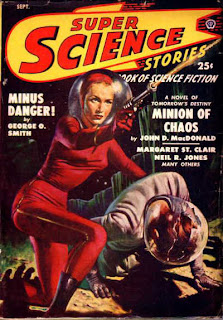 Before he became a writer, John D MacDonald attended the Wharton School of Finance at the University of Pennsylvania and, later, the University of Syracuse, where he graduated with an undergraduate degree in Business Administration. He went on to earn an MBA at Harvard Business School, earning his postgraduate degree in only eighteen months. Although MacDonald's heart was never really in it, he made a few attempts at a career in the world of finance before joining the Army in 1940. Yet it is clear from reading the author's fiction that his failures were not due to a weak grasp of the subject, for the works of John D MacDonald are peppered with an interesting and informed knowledge of economics on both a micro and a macro level. This insight could appear as an aside in a long-forgotten short story or as the plot for a full length novel (see Pale Gray for Guilt). Indeed, this preoccupation and fascination with economics eventually gained full form in the recurring character of Meyer, the brilliant and renowned economist who also happens to be Travis McGee's sidekick. It was Meyer, not McGee, who was really MacDonald's alter ego, an admission hinted at by the author and stated flatly by his wife.

In one of MacDonald's early short stories, "The Miniature," the protagonist is actually an economist -- a professor of economics, to be precise -- and MacDonald uses the tale to explore the possibilities of the value of money in a world where gold has lost its value. It originally appeared in the September 1949 issue of Super Science Stories under the house name of Peter Reed, a necessity owing to the fact that this particular issue of the science fiction pulp contained another JDM tale. Given the current political arguments over the Federal Reserve's plan to purchase $600 billion of federal debt and the worldwide condemnation it has ignited, "The Miniature" proves to be an interesting history lesson as well as a reminder of the fact that the money in our wallets was once actually backed by something tangible.

It's certainly not the plot of "The Miniature" that makes it worth re-reading after sixty years, employing a derivative and overused device that must have been old even in 1949. It's a time travel story, the kind where the protagonist is suddenly thrust into either the future or the past, he or she witnesses amazing things, and is then sent back, disbelieving the entire experience until an artifact -- either brought back or left behind -- causes them to accept the veracity of the event. Think the sand-in-the-shoes at the end of The Twilight Zone episode "King Nine Will Not Return." Luckily MacDonald tells the story with a breezy, semi-humorous voice that partly takes the reader's mind off of the obviousness of the plot.

Professor Jedediah Amberson is walking through the front door of his local bank, on his way to cash a check, when he feels a faint movement.

"It was, he thought, almost a tremor. Once he had been in Tepoztlan, Mexico, on a Guggenheim grant, doing research on primitive barter systems, and during the night a small earthquake had awakened him. This was much the same feeling. But he stood inside the bank and heard the unruffled hum of activity, heard no shouts of surprise. And, even through the heavy door he could hear the conversation of passers-by on the sidewalk. He shrugged, beginning to wonder if it was something within himself, some tiny constriction of blood in the brain. It had been a trifle like that feeling which comes just before fainting. Jedediah Amberson had fainted once."

Of course, Professor Amberson has just traveled through time, although he doesn't realize it yet. "Not a man to take much note of his surroundings," he writes out a check on the counter and gets in line to see a teller. The scornful young man in the teller window looks intently at the check and then tells Amberson to go play his games elsewhere. It is only then that the good professor notices the strange way the man is dressed, in brightly-colored clothing that look like pajamas. When the teller refuses, Amberson makes enough of a scene that the guard walks over and confronts him, a guard who is dressed even more strangely.

"The man wore a salmon-pink uniform with enormously padded shoulders. He had a thumb hooked in his belt, his hand close to the plastic bowl of what seemed to be a child's bubble pipe."

There is an altercation which leads to the professor being shot with some kind of ray gun that prevents him from moving. Only then does the bank manager emerge from his office, a "fussy little bald-headed man" wearing "pastel blue pajamas with a gold medallion over the heart," who wants to know what all the commotion is about. Once he opens Amberson's change purse and sees a 1949 quarter, he has the professor brought back to his office. It's all now perfectly clear to the manager, but not to Amberson. This is not 1949 but "year eighty-three under Gradzinger calendar." The manager opens the windows to his office and reveals a strange cityscape, unrecognizable to Amberson, who now realizes he's not in Kansas any more.

But this is not really a problem, for the manager need only call the "Department of Temporal Technics" at Columbia University to send over a few technicians who will send the professor back. It is while they are awaiting the arrival of the time boys that Amberson takes the opportunity to ask about the economics of the future world. The currency is now small plastic pellets, although the monetary decimal system has been retained, and when Amberson makes the presumption that the currency is still backed by gold, he gets a dismissive answer.

"Greenbush gasped and then laughed. 'What ludicrous idea! Any fool with public-school education has learned enough about transmutation of elements to make five tons of gold in afternoon, or of platinum or zinc or any other metal or alloy of metal you desire.'"

The professor suggests other possibilities, such as units of energy, precious stones, even rare national resources, only to be laughed at by the manager. Perplexed, Amberson asks a question that must sound strange to anyone who was not an adult before 1970:

"But currency, to have value must be backed by something!"

It is backed by "something," something that is still rare in a future where there is an abundance of everything else that once had value, something that can not be duplicated with speed or mass-production, something that the manager just happens to have stored in his "refrigerated" bank vault: an "HUC."

To find out what that acronym stands for, you'll have to read the story.

It's hard today to recall that once our money was backed by precious metals, and that one could actually walk down to the Treasury Building on Pennsylvania Avenue in Washington, DC and exchange bills for silver or gold. Historically this was always the case, with a few periods of national crisis (World War II, the Great Depression) when that standard was relaxed. When MacDonald wrote "The Miniature," the United States had returned to the gold standard only three years before as a result of the Bretton Woods agreement that set a system of fixed exchange rates and pegged the value of gold at $35 per ounce. That system was followed until 1970, when Richard Nixon closed the gold window and began a system of fiat money, where the currency of the nation was backed by nothing more than "the full faith and credit" of the United States Government. The world followed suit (the dollar being the world's primary currency) and the gold standard has never been used since.

Interestingly, a few days before I re-read "The Miniature," former Federal Reserve Chairman Alan Greenspan told the Council on Foreign Relations that "fiat money has no place to go but gold," and the continuing troubles of the world economy bring almost daily calls for a return to some sort of "sound money" policy.

It makes me wonder what MacDonald would have thought of our current economic mess. A Keynesian most of his life (recall the name of Meyer's boat at Bahia Mar), MacDonald had a change of heart after the economic troubles of the Nixon, Ford and Carter eras, and he told George Vassallo in his last-ever interview that he believed the world economy was doomed, "unless we dump Keynesian theory and embrace Schumpeter's vision of the reward to the innovator." He even blew up the John Maynard Keynes at the beginning of Cinnamon Skin!

"The Miniature" was included in MacDonald's 1978 science fiction anthology Other Times, Other Worlds -- which can be found on used book sites -- and it is currently available in eBook form (marred by several typographical errors) as an entry in Wonder Audio Books' Death Quotient and Other Stories. 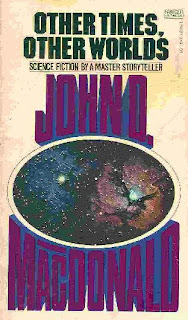