"Nicky and the Tin Finger" "Nicky and the Tin Finger" is a 5,000-word John D MacDonald short story that was originally published in the September 1948 issue of Bluebook. That particular month MacDonald set a record for himself by getting twelve of his short stories published in a variety of pulp fiction magazines, including three science fictions, two sports, and seven mystery/crime stories. One of the entries -- "Deep Death" -- was a 30,000-word novella. The machine was humming.


A whimsical and humorous bit of science fiction, "Nicky and the Tin Finger" combines a mystery story with an unusual robot called Moe, the invention of an inveterate tinkerer named Nicky Lugan. Nicky is a small, round middle-aged man who makes his income by leasing and maintaining vending machines throughout the 15,000-person town of Udella. This enables him to spend most of his time inventing things in his apartment/lab above Venerick's Garage. His proudest invention is Moe, a walking-talking robot made of tin, a machine that is able to perform a variety of tasks depending on which little black box Nicky has affixed to Moe's neck.

The story's narrator is a newspaper reporter named Barney, who is sent over by his editor to interview Nicky. There has been a murder in town. Local crime boss and rival vending machine operator Big George Loke has been killed, and not in a normal way. His car was rigged with a sophisticated device that was designed to blow off one of the car's wheels, but only when it was travelling at a high rate of speed. Given his rival business and his mechanical expertise, Nicky is the obvious suspect. Plus, one other reason:

"People think you're a little crazy, staying up here all the time and making improvements on Moe, and then taking him down to the tavern once a week."

While Barney visits, Nicky has Moe fix them a couple of drinks. Moe enjoys a shot of machine oil. Barney, who is evidently also a friend of Nicky, warns him that the cops will try to pin the crime on him. Big George passed out a lot of favors around town and greased all of the right skids. People are mad and want justice. Barney informs Nicky that if they can't pin the crime on him, they will have him committed to a padded room. He and Moe aren't exactly the most admired pair in town:

"Moe is a nice gu- a nice robot, Nicky; but he's made you a few enemies, you know. Remember when he walked up in the dark and tapped Mrs. Berril on the shoulder? She turned and slugged him, and had to have three stitches taken in her hand. And remember the day he went into the school by mistake. Eleven cases of hysterics in the third grade alone. No, Nicky. I think they could do it to you, and I think a lot of people would be darn' well pleased over it."

"Dinner was an unhappy meal. Nicky kept sighing, and he didn't eat much. I could swear that Moe kept giving him worried looks. Moe slipped up when he lit my cigar. He tried to hold the match under my chin. Nicky was very embarrassed about the whole thing. 'Just a minor adjustment,' he said. 'Something came loose, I guess.'"

"A good detective is very observant. He has good eyes and he sees everything and remembers everything. He tries to find the motive for a killing, and then he finds the opportunity. With everything sewed up, he puts the finger on the criminal."

So naturally Nicky gets the idea to program Moe with all of these attributes and begins his own investigation. After a wild, comic ride using telescopic eyes and a truly-photographic memory, Moe solves the case -- literally. 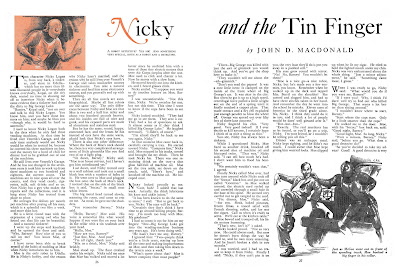 "Nicky and the Tin Finger" is a moderately engaging story and one of MacDonald's early attempts at humor, which was an area he did not excel at. It succeeds at what it tries to do, which is to to tell a simple story in a light tone. The robot is funny (there's a drunk scene), the gangsters are comic-tough (the main bad guy is named McGee!) and the ending is pure slapstick. And although the character of Moe would obviously cause this tale to be classified as science fiction, it was not included in the Bibliography of MacDonald's Other Times, Other Worlds, where all of the author's s-f stories were supposedly listed.

Looking through the September 1948 issue of Bluebook is awe-inspiring, at least to me and, I would assume, any other lover of fiction. For only two bits the reader could -- every month -- own a magazine containing one "complete book-length novel," one novella (okay, they called it a novelette), nine short stories, four "stories of fact and experience," five "special features," and story art on virtually every page. Not to mention, the glorious wraparound cover below. Man, those were the days!

As far as I can tell, "Nicky and the Tin Finger" has never been anthologized or reprinted. 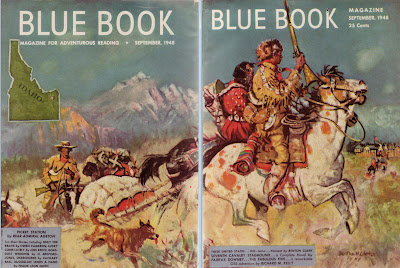