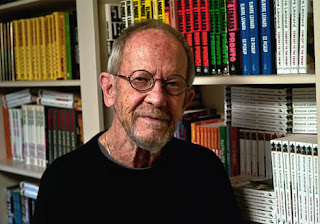 This coming Sunday will mark the 100th anniversary of the birth of John D MacDonald. A big celebration is planned for the preceding Saturday at the Selby County Library in Sarasota, sponsored by One Book One Community and featuring the dedication of a plaque in Five Points Park, dramatic readings from JDM’s writings, Cal and Nola Branche reading the wartime letters of John and Dorothy, a speech by the Sarasota mayor, and a JDM Tribute Committee that includes authors John Jakes, Tim Dorsey, Craig Pittman, and two of MacDonald’s grandchildren.

For those of us who live outside Florida and who won’t be able to make it to the big shebang (that includes me, alas), the first six months of this centenary year have been a godsend of JDM delights in the form of a weekly guest column in the Sarasota Herald-Tribune titled John D and Me, featuring (primarily) contemporary authors big and small, all writing about the important influence MacDonald had on their own writing. Everyone from Jakes and Stephen King to Randy Wayne White and PJ Parrish, they have been, almost uniformly, delightful reminiscences of both personal encounters with JDM and recollections of how picking up a John D MacDonald novel changed their lives. It will be sad to see the series end on July 24.

One author who probably would have been happy to write a column about JDM is Elmore Leonard, who passed away in 2013. In lieu of that never-to-be-written piece, I thought it would be fun to present a substitute, one that reads almost like it might have been written for the John D and Me series. It comes from an interview the author gave on the NPR program All Things Considered back in December of 1986 on the occasion of MacDonald’s passing.

All Things Considered: Novelist John D MacDonald talked with us four years ago about his craft -- about leaving much of the story to the imagination of the reader. This is what he said:

“I had the feeling that if I can describe a typical scene like say I have my guys in Texas and they’re in a motel room and all I have to describe is the clattery, bangety-bang old air conditioner and maybe a big stain that’s run down the wall from the air conditioner like the shape of the bottom half of the map of Texas, and the reader, having been in those kinds of motel rooms, will create the rest of it for himself even to the odors thereof.”

John D MacDonald died over the weekend of complications after heart surgery. Elmore Leonard joins us now from Birmingham, Michigan. Leonard is a crime writer who studied MacDonald’s work. He says he knew MacDonald was in poor health.

Elmore Leonard: I was looking through my correspondence. John and I have been corresponding since ‘82 and I have a letter where it says here, “September 1, 1986,” and he says “I’m winding up this and that in preparation for a trip to a veritable garden spot -- Milwaukee -- where a Doctor Dudley Johnson is going to do bypass surgery. There seems to be a lot of it going around. [Author James] Michener just had one. I wouldn’t want to feel left out.” That’s the last line.

ATC: How sad! John D MacDonald seemed to a reader -- I had never met him -- seemed to be having a great deal of fun being the sort of writer that he was. He seemed to be enjoying himself. Do you think that’s true?

EL: I’m sure he had a good time because I think his attitude came through in his novels, certainly in the Travis McGee books, without being really too intrusive. They’re a part of the story which made the characters more lifelike -- made them alive. He said in one of his letters back in 1982 “The college-age people look at me with incredulity when I tell them I’m still trying to make the stuff better. If there was such a thing as total objectivity, there would be no bad books written or published and no bad plays produced. I tell them I am trying to make the author ever more invisible and keep the words and sentences shorter without triteness.”

ATC: I bet he would get insulted when people would insinuate simply because he sold almost one hundred million books that it was somehow easy writing what he did.

EL: Yeah, that happened. The same thing happened with John O’Hara. The fact that he was so prolific, that he wrote so many short stories and books that means that perhaps he shouldn’t be taken seriously. And O’Hara said, “Well, that’s what I do. I’m a writer.” And that’s exactly what MacDonald did. The fact that he did what? Five hundred short stories and 70 novels -- it’s unbelievable. But he stayed at it. That’s what he did. He didn’t talk about it.

ATC: There’s a quotation in the New York Times today from Professor Robin Winks of Yale with these phrases about MacDonald’s work. “He wrote books that contained the near randomness of honesty, and also the persistence of evil. The books would remind you of how bad things could be if you ventured past a certain line and also how good people could be when under pressure.”

EL: That’s what I think attracted me to him back in the ‘50’s. When I worked I studied him, among other writers. But I studied him in particular in that he was writing crime stories. But I was also attracted to the fact that he used people who were real. They were everyday sorts of people who find themselves in some sort of a deadly situation. They were so life-like. His bad guys were not all bad and his good people were not all good and I think that was quite an influence on my work.

ATC: Elmore Leonard, talking about writer John D MacDonald who died Sunday in Milwaukee at the age of 70...
Posted by Steve Scott at 1:00 AM