"The Rabbit Gets a Gun" 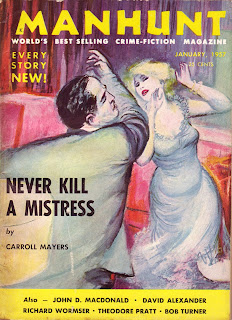 When pulp magazines began their sometimes-sudden, sometimes-gradual death in the early 1950’s, it is generally presumed that the causes of this demise included television, the paperback original, comic books and men’s adventure magazines. There were others, of course, including economic pressure (a 72% increase in production costs between 1944 and 1947), a more sophisticated audience just returned from a world war, and the inability of publishers to get their product to market when a major distributor stopped handling these kinds of magazines. This final reason caused pulp powerhouse Street and Smith to kill all of their pulp titles with the exception of one: Astounding Science Fiction. But even that title didn’t survive as a pulp: since November 1943 it had been published as a digest.


Digest refers to the magazine’s smaller size, about 7.5 inches x 5 inches, the term derived from that earliest and most popular version, Reader’s Digest, begun back in 1922. Although a magazine’s size shouldn’t define its content, in the world of mystery and detective fiction, it has come to that. For as the crime pulps dropped dead, one by one in the early 1950’s, the mystery digests took their place and filled a the void with a different kind of story. As editors Ed Gorman, Bill Pronzini and Martin H Greenberg assert in the Introduction to their 1997 anthology American Pulp, “... looked at objectively today, a good deal of pulp fare was laughable and forgettable.


“... For us, this was the true golden age. Manhunt alone, at its peak, published two or three minor masterpieces per issue, month in and month out… The new breed of writer was generally superior to the old pulpsters. To be sure, they were still writing pulp fiction, but a more fetching and insightful variant of it… [These writers] turned out stories and novels that were artful in every respect. Unlike most plot-driven pulp stories, these were realistic tales of character, mood and theme. And these same elements were reflected in shorter works they wrote for the magazines.”


John D MacDonald wrote stories for several of the above-mentioned digests, including Manhunt, Justice and that oldest of mystery digests, Ellery Queen’s Mystery Magazine, where some of his finest crime stories appeared. A few of his older pulp stories were reprinted in other digests, including Mike Shayne’s Mystery Magazine, The Saint Detective Magazine and Shell Scott Mystery Magazine. In fact, much of MacDonald’s better pulp work is quite interchangeable with the stories he wrote for the digests, a testament to the author’s superior fiction skills. Take a story like, say, “Night Watch,” which appeared in the May 1950 issue of Detective Tales. It boasts all of the qualities the editors of American Pulp laud the digest stories for: character, mood and theme, and it could have been published in any of the mid-1950’s digests without batting an eye.


MacDonald had four stories published in Manhunt, and I’ve already written about three of them. His first appearance in the magazine was in January 1955, exactly two years after its inaugural issue, with his superlative “The Killer.” The following year Manhunt published the almost-as-good “Squealer” in its May issue, and the year after that the January issue had “The Rabbit Gets a Gun.” MacDonald’s final story for the magazine was “Black Cat in the Snow,” which appeared in the February 1958 issue.


The rabbit in “The Rabbit Gets a Gun” is the story’s protagonist, an unremarkable, unimpressive, soft-spoken assistant branch manager of a personal loan company named Frank Lowell. After several years of slaving away for this “rough cold outfit,” he is given the impression by his boss that he would be promoted to branch manager when the position opened up. But when it finally does Frank is passed over for a more appropriate -- and younger -- choice, a “tall, breezy, confident, smiling” man named Carl Aldrich. Everything that Frank is not. This slight sends Frank into a depressive sulk, and after a few weeks he decides to use his vacation time -- time he was to have spent with his fiancé apartment hunting -- to clear his head and make some decisions about his future. But he’s not really fooling himself, or his girl: he’s running away, from the job and “the responsibilities of marriage.”


He drives relentlessly for 500 miles before wearily pulling into a fleabag motel, a collection of rundown cabins on the side of a wooded hill. The opening paragraph of the story is wonderfully atmospheric and shows what MacDonald could do with only a handful of words:


By the time he was ready to stop for the night, the good places were all filled up and he had to settle for a third rate setup -- where he was charged five dollars for one of the sour little cabins back up on a slope behind a diner that smelled of grease and sweat. He had parked beside the cabin, carried in a single suitcase, and now he sat on the sagging bed, looking down at the reflected glare of a naked light bulb on scuffed linoleum…


Realizing he is out of cigarettes, Frank walks down the road through the woods to the diner, stumbling a few times in the darkness. Inside he asks a heavy man in a soiled apron behind the counter and is treated to a typical indignity:


The man stared at him with heavy, weary, contempt. He yawned and let the insolent seconds pass and finally said, “The machine, bud. The machine.”


Frank flushed and turned and located the machine. He bought a pack and walked out again into the night. He was too depressed to be very angry. Perhaps the reaction of the fat man was a capsule demonstration of why this job, or any job, would be a dead end. Suppose Aldrich had asked the same question. “Right there behind you in the machine, sir.” Maybe when you have no look or air of importance, all the world treats you with bored contempt, forgetting you the moment you turn away.


So, lost in his own self pity, Frank makes his way back to his cabin in the darkness. He opens the door and is startled by what he sees.


There were three people in the room. They all stared at him with identical expressions of shock and alarm. One of them moved very quickly, and Frank Lowell found himself, for the first time in his life, staring at the muzzle of a gun. The man who held it was young. Perhaps nineteen. But his eyes were old and his mouth was cruel and old. He wore khaki pants and was stripped to the waist. His arms and chest were heavy, muscular and deeply tanned. There was a flag tattooed on his upper arm.


Frank has accidentally walked into the wrong cabin. He is shoved up against a wall, searched and questioned. His response is “thin, scared and breathless.” He is instructed to sit on the floor while the men finish their card game and decide what to do with him. When it becomes obvious that they intend to kill him and make it look like a suicide, Frank has a decision to make… 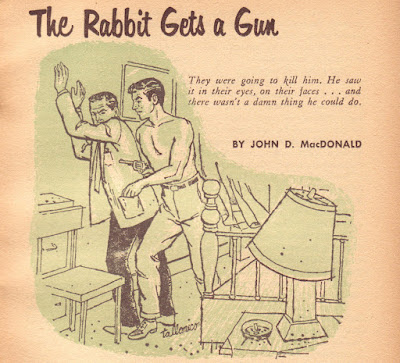 MacDonald’s original title for this story -- “The Shortest Vacation” -- certainly lacked poetry, and it’s not surprising that the editors of Manhunt changed it, but at least they could have kept from ruining some of the suspense of the story. It’s a problem with many of the stories MacDonald submitted, and it wasn’t limited to the pulps. Still, “The Rabbit Gets a Gun” is an enjoyable, atmospheric tale that exhibits MacDonald’s clean, terse style and brilliance at characterization. It’s the only one of the author’s Manhunt stories to have never been reprinted or anthologized, a shortcoming that will hopefully be rectified one day.
Posted by Steve Scott at 1:00 AM