A Black Border for McGee 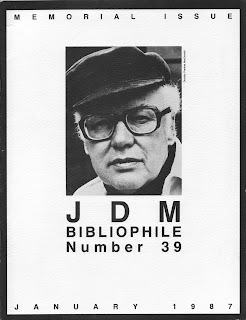 Of all the legends surrounding the writing career of John D MacDonald -- and there were a few -- none took on a life of its own more than the "Black McGee." According to this myth, MacDonald had written a final installment in his flagship Travis McGee series where Travis is killed. The remainder of the book -- as well as the case -- is finished by his sidekick Meyer. Since all of the McGee books featured a unique color in their titles, this would of course be black. This book was supposedly locked in a vault in MacDonald's office, to be released only after his death. The title was uncertain, but the one used must frequently was A Black Border for McGee.


It's been twenty-three years since MacDonald passed on, and we're still waiting.

Although this rumor has been credibly denied by no less an authority than MacDonald's wife and son, it lives on, popping up in blog postings, websites and the occasional newspaper article. Since starting this blog last November I have already received two email inquiries asking if I have a copy of this mysterious book and how to obtain one. I've looked into the background of this myth and found a few surprises.

Ironically, it may have been MacDonald himself who started it. In the Spring of 1980 the very first issue of Clues: A Journal of Detection was published and featured the full transcripts of several scholarly papers that had been presented at the John D. MacDonald Conference on Mystery and Detective Fiction on November 18, 1978. JDM attended that conference and responded verbally to the papers immediately after they had been read, and those comments were published in the July 1979 issue of the JDM Bibliophile (# 24). The subsequent publication of the full papers in Clues offered MacDonald an opportunity to respond again, in writing this time and with much more careful thought. In his comments on a paper by Classics Professor Erling B. Holtsmark titled "Travis McGee as Traditional Hero," MacDonald attempted to explain how the unique characteristics of the McGee novels came to be. He wrote that a strong erotic element to the stories was necessary in order to make the plot compelling, since due to the very nature of a series character the element of his death was absent.

"The constant reader is going to know, subliminally, that no matter how grievously I endanger McGee, he will survive -- at least until until I do a book with black in the title. The reader does not know whether or not a person for whom McGee has formed a strong attachment will survive."

It seems pretty obvious to me that this was an offhand comment and that he had no actual intention of writing such a book at the time. And since there is no reference to a previous mention of the book or of a longstanding rumor, this could very well be the rumor's origin. At least I have found no earlier mention of it.

This is not to say that MacDonald never grew tired of McGee or thought about ending the series. Biographer Hugh Merrill quotes a letter penned during the writing of The Lonely Silver Rain where JDM said "I can see now that I'm aiming for an end to the series with the 22nd installment." After the book was published he gave an interview to Peter Heck where he stated the following:

"I'm gonna end with the twenty-second book. I got it blocked out enough to know that if the book goes all right, which I trust it will, he's gonna pull up stakes with a bunch of about five or six other boats, good friends and what not and acquaintances. Well, he's gonna go find the place and then go back to Bahia Mar and they're gonna load up and take off and move to a new marina up in the Panhandle. Up there you can find areas that are as pleasant as Fort Lauderdale was twenty years ago."

Tellingly, MacDonald requested this paragraph be removed from the interview and it did not see the light of day until Merrill's book was published in 2000.

MacDonald did tell Heck that some form of Black existed, but it bore no resemblance to a finished or complete work and had been done primarily as a negotiating tool, not as a real end to the series.

"I've got some materials on it, but not for immediate publication and I don't want to publish it because it would spoil the fun for people who are just now finding McGee and people wouldn't want to read a book about a dead hero, right? So I use that threat and twenty to thirty pages... I've used that as a bargaining base with my publishers. When they get funny ideas how long it takes them to get the royalties... Why, then I start muttering about that book. I say, 'You better treat us right, McGee and me, or I'll kill him.' That straightens things out. That's practical economics."

That paragraph reads to me like a grand put-on, and MacDonald admitted that he lied frequently in interviews. As far as I know there was never any such "material" found among his papers. One can see he never intended to actually publish such a work, and his most direct response to the idea of killing McGee was made to a fan who wrote in 1981 and asked him about the notion point blank. MacDonald replied, "There will never be one called BLACK where he is killed off. It wouldn't be fair to the people who are just discovering the fellow."

Still, the author was working on a twenty-second McGee when he died. Merrill quotes JDM in a letter to Stephen King where he states "I have made enough of an inroad on the 22nd McGee to know now it will be twice as long as any which have gone before. It will be two books in one, twenty years apart in time." But he was working primarily on Barrier Island at the time and was only in the plotting stages of the new McGee. MacDonald had no intention of rushing things, as can be seen from this excerpt from a May 1984 letter to friend Mickey Spillane.

After MacDonald died in 1986, Dorothy and Maynard MacDonald wrote a brief thank you to the fans of the author that was published on page one of the January 1987 JDM Bibliophile (#39). Titled "A Thank You to John's Friends," it contained the following postscript:

"There is no book or manuscript by John which ends in Travis McGee's death. We think John would have missed him as you would."

This was probably in direct response to the mention of just such a book in nearly every newspaper obituary published, with the Associated Press version even quoting the supposed title.

So how far along did MacDonald get with McGee 22? That wasn't revealed until December 1990 when MacDonald's bibliographer Walter Shine wrote a paragraph on the subject in his JDM Bibliophile column. He revealed that JDM's correspondence with Spillane was the earliest mention of the book, with a subsequent mention in a December 1985 letter to his publisher, stating that the book would be "twice as long as the average of the others." (Shine doesn't mention the letter to Stephen King, which was written in January 1986.) At the end of April he was "about to start it," and the following month JDM said he "was chugging away at [it]" and thought it might be published in the Spring of 1987. According to Shine, the last recorded mention of McGee 22 was on September 2, 1986, only a few days before MacDonald left for Milwaukee and his fateful heart operation.

"[MacDonald wrote] that 'the very last work' he was able to do 'before the lethargy got too heavy was [Reading for Survival, a travel article on the Yucatan], and the fourth chapter of the 22nd McGee'... Those four chapters have not been located..."

As near as I can see from the JDM Collection finding guide, they never were located. MacDonald had been writing on a word processor for several years by then and he may not have printed hard copies of those chapters. Perhaps the words are still sitting on some floppy disc or hard drive deep in the bowels of the University of Florida library. They have no listing for JDM's word processor or of floppy discs, and I'm not sure what happened to the machine. It could have been auctioned off, along with much of the MacDonalds' other belongings in the notorious 1989 estate sale. Maybe some unknowing fan has the last four chapters of McGee sitting in his attic, waiting to be fired up and downloaded to a waiting world.
Posted by Steve Scott at 7:05 AM